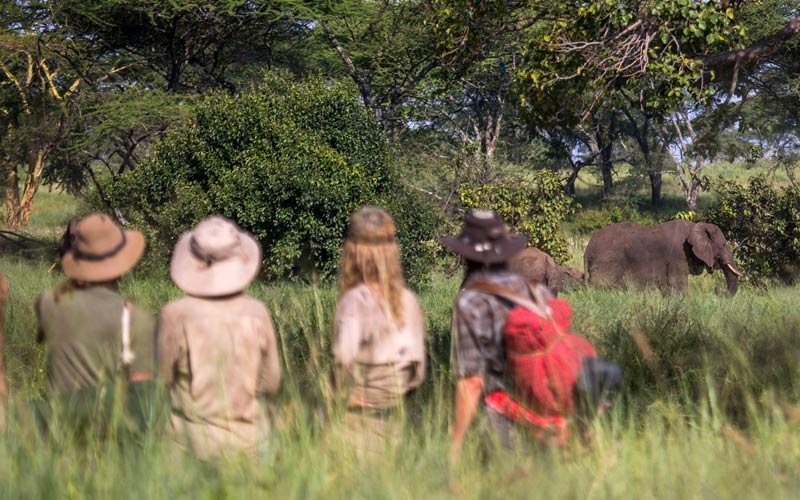 A “crazy idea” from production company October Films resulted in 20 people walking hundreds of miles across the Serengeti, following migrating wildebeest, which is documented on the National Geographic Channel series Mygrations (Mondays, 9 p.m.)

While those men and women faced considerable challenges, the producers and network faced a different one.  “Achieving authenticity was the single most important and difficult obstacle,” National Geographic Channel’s vice president of production Matt Renner told me.

“How do we produce a story like this that contains 20 human beings without getting in front of the story or in their way?”

Complicating that, of course, was the environment, with its various predators.  Producers wanted the Mygrations cast—and viewers—to “really and truly experience what it’d be like to survive without the safety net,” he told me.

Though the narrator says the human herd is “unarmed and alone,” they were traveling with producer/camera operators (of course) and also six park rangers, armed locals who were there for safety only.

Their actual location, Renner told me, was “completely dependent on the geography and topography”; in some places they had to be very close to the human herd, while in others there could be more distance.

Renner told me that “knowing there were park rangers reinforced” the danger for the cast.

And that didn’t guarantee safety, either. As this clip from tonight’s episode shows, a warthog running through the herd causes an injury to one of the cast members in a split second.

The actual crew was much larger than the 10 or so people who were with the herd: it was a total of 65 people, including production crew and African fixers. The four “producer-shooters” would swap out regularly, and “leapfrog from base to base ahead of the actual production,” Renner told me.

Other staff, including medical personnel, were close enough they could be called in an emergency. “We had very clear pre-production guidelines” and knew “the best ways to extract people” along the route,” Renner said.

The Mygrations trek began with what Renner called October Films’ “crazy idea”: having people follow a migratory route. During the “quite a long development process,” he said, they looked at 15 to 20 different possible migrations as possibilities. (If there’s a season two—and Renner told me the network is waiting to see reception for season one first—it could follow the caribou migration in Alaska, which has very different, and quite varied, terrain.)

Both the show and casting were all about “comparing and contrasting [humans] with various animal groups,” Renner said. “We were various curious to see to cast almost the analogue” to roles such as the “alpha males in the wildebeest.”

The human herd had to navigate themselves, following the wildebeest, and Renner said “we never actually had to run into the problem of producers huddling calling” headquarters to say that the herd was off course. But he added that “there were days that they didn’t run into the herd [of wildebeest], which was quite scary for them.”

In some of the spectacular overhead shots of the human participants, filmed by cameras attached to drones, there are some tire tracks visible, and I asked if that was from the production (which was staying ahead of the cast) or if the cast was sometimes crossing near inhabited areas. Renner wasn’t sure exactly what caused the tire tracks in the grass, but said that “they’re going in and out of areas where there might be more commercial activity,” such as photographic safaris, Renner said. However, he said, “we never saw them.”

Navigating the terrain “was cause for organic conflict,” of which there is a lot in Mygrations. As in, there’s a lot of disagreement and personality conflict, though it is also obviously driven by the situation they are in.

The challenge was too much for some cast members, and they dropped out along the way—a few left just as the trek was starting. “We were shocked. We were shocked to discover even the first few people to drop out—folks that had extensive military training,” Renner said.

The cast was left to make most decisions themselves, though they had two rules to follow:

If someone did fall behind, “we would force effectively a tap out,” Renner said. (That’s not unlike what would happen if an actual wildebeest fell behind, though they’d be tapped out by, say, a lion.)

The herd did split up internally, in the form of a small mini-herd clique that formed.

“We didn’t actually imagine that there would be a complete bifurcation of the herd, but it speaks to the idea that we were interested in exploring: the primal sense of nature,” Renner said. When people are “pushed beyond the threshold of both physical and mental exhaustion, what choices do they make? What choices wouldn’t have been on the table if they’d been in their right mind or hydrated?”