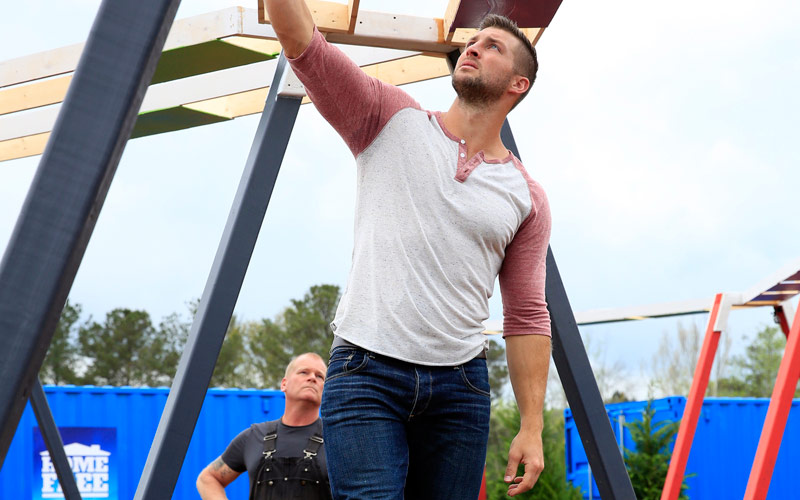 Home Free was a surprise last summer: a light competition with an emotional, uplifting conclusion to each episode. The show returned tonight on Fox, and the premiere of the second season was a major letdown, as the series transitioned into a more typical—and far more mediocre—competition.

Last year, couples helped renovate houses for deserving families, hoping to win a house for themselves if they outlasted every other team. The twist was that the deserving families were that week’s eliminated contestants, and they were shocked to learn that they’d won right after they thought they’d lost. Most episodes of season one left me wrecked at the end.

Honestly, I was surprised the show returned, both because of its ratings and because I couldn’t quite figure out how they could re-do the twist and duplicate the genuine surprise from season one.

The season two twist is this: individuals now compete to win one house, which will be given to their personal hero.

But at the end of episode one, the show told all the contestants that the same twist as season one would be in play: the loser would still win, or here, the loser’s hero would still get a house.

With that reveal went all suspense and all surprise. Now the contestants know that if they lose they still win.

And it’s just not the same to try the same emotional twist on the losing contestant’s hero. Telling the hero that their friend lost the competition but the hero still won a house didn’t play at all.

In one hour, I went from super-excited about a show’s return to a complete lack of interest in watching this happen week after week, while modular homes are assembled by an off-camera team and the contestants compete in challenges.

Things that got worse in season two of Home Free

The host. Mike Holmes was great on his own but now they’ve added Tim Tebow, who is an unfortunate side effect of the We Need a Celebrity Virus that’s spreading through reality television right now. And he’s just not good. Say all of these things with the same level of excitement you’d say, I might run out of mouthwash next week and you’ll be saying them with the same lack of inflection and excitement that Tim Tebow said them:

Looks like the footballer can’t host a show, Tim.

Challenges. Actually, the challenges are objectively better as reality TV challenges. But now they’re held in a nearby arena. I understand the budgetary and logistical advantage of having a single challenge location, and it allows for more creativity. But it also disconnects the challenges from the work on the houses. (There was at least a thin connection between the renovation and the challenge in season one, as the challenge did some work, like removing old furniture from a house.)

The actual home building/design work. In season one, couples were assigned to a certain part of the house, and had certain tasks they had to complete. That’s all gone. Instead, there was a montage of them working but, in episode one, they had no apparent responsibility and the house just sort of magically appeared by the end. (How much work the season-one teams actually did was unclear, and there was an acknowledged team of people also working on the houses, just like there is this season.)

Work orders. Mike Holmes would observe season-one teams by giving them mini-challenges/tasks to complete, and use that information in his judging. The work orders did seem like actual work that needed to be done, but now Mike observes and hands out red tags to those people who will be up for elimination. In one Work Order challenge, he used the red tag as a kind of threat to someone. It wasn’t the observer/teacher Mike Holmes I liked in season one.

Overall, Home Free has evolved into a completely different kind of show, one that lacks the magic of its first season, despite holding on to the one thing that should have created some magic (letting the losers win).

The new format is like having Project Runway‘s designers make dresses; stopping them periodically to do challenges in the workroom, like organizing bolts of fabric by color; and then eliminating a contestant based on which of them tossed the fewest buttons from the runway into a hat Tim Gunn was holding. Oh, and the loser gets to keep the dress they made.

The challenges are arbitrary, the work seems irrelevant, and now Home Free is free of everything that made it work in the first place.