Corey Brooks, a cast member on Big Brother 18, repeatedly used anti-gay slurs casually on social media back in 2011 and 2012.

Corey, 25, is a baseball coach from Dallas who describes himself in his bio as “Extraordinary, passionate, and lovable,” and says that he enjoys “sightseeing, hiking, getting sick bro pics, playing sports, going out and meeting people, trying out new restaurants, playing PS4, and just being active, in general.”

Here are screenshots of Corey’s tweets, which came to my attention via Hamsterwatch and others who found them overnight: 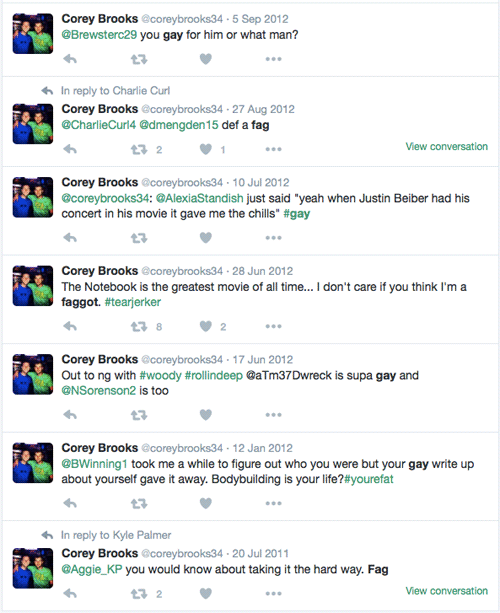 The language is four years old, and the casual use of such language may or may not predict his current attitudes or his behavior in the house. After all, Caleb Reynolds used bigoted language on social media but went on to have strong friendships with gay contestants, including this past season during his appearance on Survivor.

Update, 2:10 p.m.: Several people pointed out that Caleb’s anti-gay comments continue: In this video, filmed months after Survivor, he says, “That is a lifestyle that is not of God,” using an inaccurate term (there’s no such thing as a gay lifestyle) that is used to propogate hatred against gay people.

Why this still matters

It’s worth noting that Corey was interviewed yesterday by two-time Big Brother cast member Jeff Schroeder, a cast member whose homophobic comments and use of anti-gay slurs, which spanned both his appearances on the show, were considerably worse and were broadcast on the live feeds (“Fuck you, you fucking homo faggot”; “you fucking jealous fags”; “you fucking fags”).

Schroeder later said, “I have no problem with gay people, whatsoever.”

While Jeff’s comments were enough to cause CBS to issue a press release condemning them as “beliefs that we do not condone,” the network went on to do exactly that. CBS has employed Jeff over and over again: as a cast member on a web series and The Amazing Race, and this season, as CBS’ official interviewer  and host of Big Brother 18’s online talk show. Jeff and Jordan Lloyd have become the show’s celebrity couple, with tabloid-style articles about their relationship and pregnancy.

What Corey wrote may seem light in comparison to Jeff’s comments, or to other, obviously more hateful language. The kind of language Corey used in these public posts is often excused as just the way guys talk to each other, but repeatedly and casually using slurs, even without hateful intent, contributes to a culture of toxic attitudes toward LGBT people.

If you need an example of how often these words are used, look at this powerful, live illustration.

This weekend, when we saw an extreme and horrific example of violence against gay people—whatever the motivations were of the shooter, whether it was internalized homophobia or just hatred, there was homophobia present in the murder of 49 people at a gay club in Orlando.