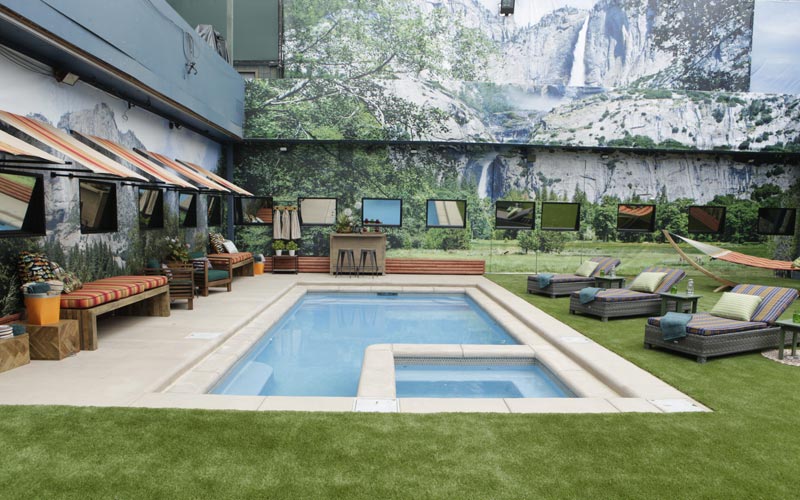 The new Big Brother backyard, with the new pool, which allows producers to use that space for challenges. (Photo by Sonja Flemming/CBS)

Big Brother 18 will not feature the generally reviled Battle of the Block, and will be replaced by a new competition that will air Sunday nights. Meanwhile, the show’s executive producer called the cast “really diverse.”

Battle of the Block, which first appeared during season 16, during which two heads of household each nominated two people, and then competed to see which HOH would remain in power and have their nominees stand.

News of its replacement came in a CBS press release about the house’s design, which said that “a new weekly competition will be unveiled in the first Sunday episode, June 26.”

Executive producer Allison Grodner confirmed in an interview with The Hollywood Reporter that the BOTB was gone, but she did say, “who knows though maybe sometime in the future it will come back.”

Co-executive producer Rich Meehan said the new challenge is not the have-nots competition, but something that will “Twist up the game! It’s going to be fun, something we’ve never done before.”

Changes to the Big Brother house

While most of the house’s changes are cosmetic—the theme is “summer vacation,” with things such as a Hawaii-themed HOH room and a Tokyo-themed bedroom—the back yard has been completely overhauled, with a new pool and an inset hot tub. Critically, those have been set below ground level, allowing challenge producers to easily cover the water and use that space for challenges, which they could previously not do.

Executive producer Allison Grodner said the decor may connect to the game: “I don’t want to give too much away, but there are quite a few things in the house that are more than just decorations.” A small change was revealed in her interview with THR: there’s a phone in the HOH room that connects to a phone downstairs, so houseguests could have conversations without being in the same room.

(Tangentially, it’s terrific THR was able to send someone knowledable about Big Brother to interview its executive producers; the writer asked, “Do houseguests always close the door when they’re talking strategy?”)

Finally, referring to the Tokyo-themed bedroom, Grodner said, “Maybe they’ll figure it out, maybe someone actually speaks Japanese. We have quite a diverse cast this year. Really diverse.”

That diversity must be something other than age: Of the cast members who were revealed so far, seven of 12 are 25 years old or younger.