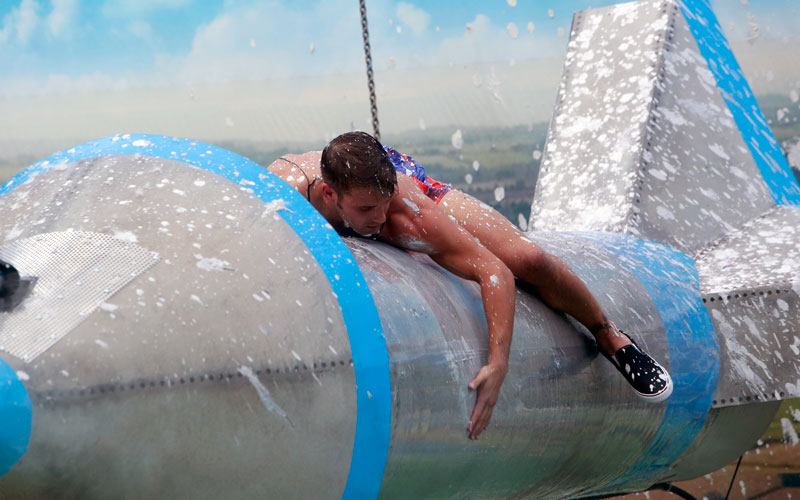 The Big Brother 18 houseguests may be playing in teams, and one person may be eliminated tonight as a result of a challenge—a first, apparently, for Big Brother (in BB14, coach Dan actually cast a vote to eliminate Jodi after his team lost)—but for anyone worried that the show would somehow change or evolve for real this time, this is still Big Brother.

That was clear in the first moments, as the houseguests gave their best attempt at acting surprised as their keys were revealed to them. And it was clear throughout the episode in smaller moments, such as Paulie and Tiffany trying to conceal their familial ties (even though they look just like their siblings), or Bronte trying to explain her name by saying it was like “brontosaurus” (um) and then demonstrating that by doing an elephant trunk with her arm (what). I would have gone with an Emily Bronte reference myself, since this seems like a group that’s read Wuthering Heights—or maybe they’re more of a Charlotte Bronte’s Jane Eyre kind of group?

But it was solidified once all 16 houseguests straddled massive, slippery phalluses for a challenge called “Ride the Rocket” that literally sprayed them in the faces, splattered them with white goo, and gave them opportunities to use endless double entendre in the Diary Room.

The first “twist” of the night, as revealed by Julie Chen, was the return of four previous houseguests, which seems about as unexpected as Julie reading teleprompter lines about how everyone should expect the unexpected. Also, adding four people to a cast of 12 is not a twist, it’s math.

The returnees started off the schoolyard pick for teams, but are not coaches (more on that below).

Teams without coaches are interesting, sort of forced alliances, and it’s not yet clear exactly how they’ll affect or work in relation to the usual game of HOH, nominees, and veto.

Perhaps most interesting right now is the newbies dedication to getting rid of who Jozea called “dusty seconds”—even their own teammates. I admire their determination and hope they go through with it, but since this is Big Brother, I would not be surprised to see that plan disappear before Thursday’s episode is over.

Da’Vonne was the most visibly upset about not playing as an individual, and was in tears for most of her Diary Room sessions. That seemed to me to be a clear sign her team would lose the two challenges and be forced to battle each other to stay in the game, but no, they pulled off a surprise victory in a puzzle-building challenge. Also, Da’Vonne should know better than most that this is a show that never commits very long to its twists. Has she already forgotten about this?

There truly was a twist with the teams, as a series of four competitions would determine have-nots for the week, give one team immunity for two evictions, and eliminate one player who lost a challenge. Oddly, one of the other players on the team that lost three challenges in a row—Nicole’s “Freakazoids”—will become HOH.

Why does someone who lost three challenges in a row become HOH? Big Brother.

I am encouraged by how the teams will affect the game, and the prospect of a new type of game play, especially with a mysterious challenge coming Sunday that will award its winner some kind of power (veto but with the ability to put up their own replacement nominees?).

There were other promising changes. The new backyard—which has a new pool that can be covered, allowing the whole space to be used—hosted the challenges with some spectacular photo backdrops blanketing the walls and even floor, which in certain shots made the space look massive.

While having the houseguests dig in tiny sand piles for puzzle pieces would make the Survivor challenge team laugh, because they know how to bury things, the second and third challenges were both challenges that required teamwork, and started to create fractures in the teams.

And fractures in teams is a good way to encourage strategic maneuvering instead of the typical alliance versus alliance rut that this game can easily slip into.

How I got the returnees/coaches wrong

A few weeks ago, I reported that two siblings of previous houseguests would be returning to the show along with four returning houseguests, both of which happened last night. However, I also reported four names and said they’d be returning to play the game as coaches, just like in Big Brother 14. That part of the story was, obviously, incorrect, and I apologize for the error. Here’s what happened.

Prior to publishing the story, I’d been hearing from multiple people I trust that this cast would include 1) four returnees and 2) two siblings of previous cast members. I then received information from someone I didn’t know, but whose information was trustworthy enough to explore. Because the information I received aligned with what I was already confident about, I’m sure there was some confirmation bias at work.

I was able to confirm part of that information with third parties, and later gained additional confidence because at least one of the people I reported was returning, Ian, was actively telling people he was on the show, which he later admitted to doing in order “to play up to the pre-show hype.”

Of course, those confirmations were also inaccurate, hence the story. I still don’t know why the original information was wrong—decoy names? The telephone effect (teams of four with returnees starting off the selection sounds similar to coaches)? A total hose job? In any case, it was wrong. I strive to be accurate, and usually hold off on reporting this kind of behind-the-scenes chatter until I’m confident that it’s accurate, especially because these things can and do change frequently.

In any case, I apologize for the errors in the story. Now back to Big Brother and a season of ejaculating challenges.