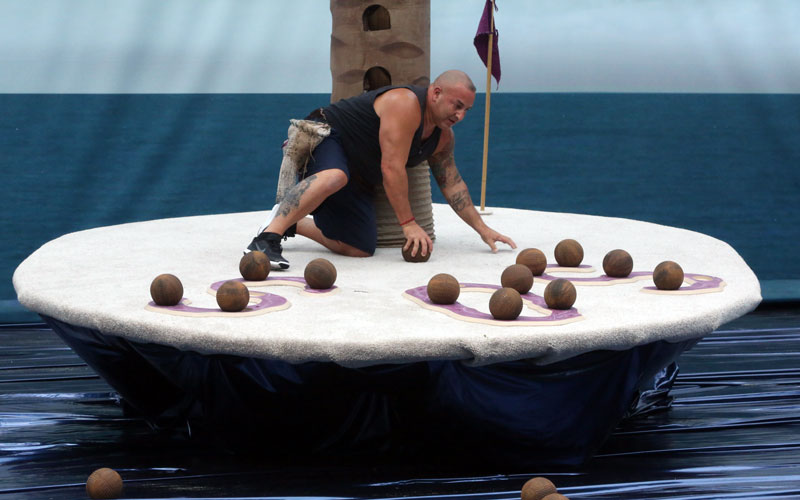 Big Brother 18's Glenn Garcia seconds before he lost control of his coconuts and was evicted from the house. (Photo by Michael Yarish/CBS)

The oldster is gone and the returnees are in control of Big Brother 18, which went from promising to expected in its second episode. Despite the night-one, four-challenge introduction and the new team structure, episode two virtually flatlined in terms of game play and drama.

At the very least, episode two felt like a month-two episode, not a day-two episode.

After a well-constructed and conceived individual challenge, Glenn was eliminated, but he just barely lost to Corey. At 50, Glenn was by far the show’s oldest houseguest. No one over the age of 32 is left; most are in their 20s, and now more than half are 25 or younger.

The game slipped right back into the more familiar territory even before Glenn’s exit.

Nicole played her remaining two teammates flawlessly, acting as if the first HOH was unwanted, and so they gave it to her and allowed her to keep the veterans safe. (Tangent: I don’t know if I can take another summer of Nicole in the Diary Room—she’s perfectly fine outside of that but when she’s coached by the producers to yell, it’s almost unbearable. FYI: Why houseguests shout in the Diary Room.)

Nicole’s game play, while a smart move on her part, represents the kind of imbalance that made me loathe returnees in early seasons of Survivor, when the returning players dominated because of their advantage—and unquestionably, having been on a show previously is an advantage by itself, because the experience is familiar and there’s no mental energy consumed by how everything works.

Jozea made himself an early target in part by calling himself “the messiah for the newbies,” which doesn’t actually make any sense but at least gave Da’Vonne fuel for Diary Room rants.

In order to secure his exit, Nicole is already putting up a pawn, a thing that basically never works. “I just feel like we’ve seen this so many times,” said Paulie the pawn.

We’re told that the Sunday competition will “shake up the game,” so maybe there’s hope. So far, the teams seem to have no effect at all except to give immunity to one group of people, and made HOH something that a team had to agree upon.

For what it’s worth, while Big Brother was the number-one show last night, ratings are down compared to last year (not all that surprising in television)—but also down night to night, meaning the show lost viewers despite the cliffhanger and two-part premiere.

Also on reality blurred today: Win more than $100 worth of Shark Week swag.