Behind the scenes of Bachelorette group date: Chad, Evan, and more

Jessie Rosen’s Sunday Night Sex Talks was featured on the June 6 episode of The Bachelorette, and here, she writes about her experience hosting the group date, from initial contact with producers to the confrontation between Chad and Evan.

Confession: I was not wildly familiar with all-things Bachelor nation prior to my storytelling series, Sunday Night Sex Talks, being approached as one of the group dates on this season of The Bachelorette. I watched the most recent season featuring Ben-the-Bachelor because my good girlfriend’s insisted he was the most charming ever, but I did not come into this wild experience knowing the ins-and-outs of the show. I didn’t even watch UnREAL at that point (a fact I’ve since corrected, and thank god).

So how did this even happen? And what exactly went down? Here is the full story.

I knew enough about The Bachelor and Bachelorette to know that when producers got in touch about attending my storytelling show, I put them on the VIP list!

I’ve been running Sex Talks in Los Angeles for four years. The shows feature true tales about sex, love and dating straight from some of the entertainment industry’s most talented performers. People get very real at my show so I had a good sense of why it would be a fit for the men of The Bachelorette. After the Bachelor team visited we started talking about which of my shows would work for the production team’s date and landed on a plan.

I was incredibly excited about the opportunity for Sunday Night Sex Talks to appear on The Bachelorette because it’s such an incredible platform, but I definitely had some reservations as things started to unfold. My mom watches ABC—as does my mother-in-law. I wanted to make sure they were going to show my and my show in a positive light. They assured me that it would be my show as it normally runs and that any drama would focus on the guys, not me.

Planning was incredibly quick after I gave the go-ahead. I’d say I received the initial offer about two months before the actual shooting. Quick quick! The shoot was business as usual for me because I regularly book and run my shows.

A group date, with performances and cameras

Our plan was for JoJo’s group date to include a trip to one of my co-ed shows with the surprise being that all the guys attending the date would have to tell their own sex story! When did they find this out? Oh, while seated in the audience. That is completely and totally true. Oh man, the look on their faces…

Granted, some of the guys seemed hip to the reveal when they walked into my show. A smart man of The Bachelorette knows that when he arrives somewhere, he’s probably participating, but these guys didn’t know that they would only have about one hour to prep their stories while the rest of my show continued. 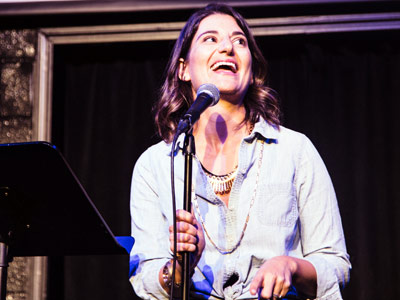 A one-hour prep is a challenge for a seasoned performer, so I have to be honest, I was not hopeful. I truly thought a few of the guys would refuse and that most of them would bomb. I was shocked by A) how much they got into it and B) how good some of their stories turned out!

Filming of my show ran as normal, but there were separate cameras and teams on JoJo and the guys as they came into the show and during portions of the show where they were prepping for their special role in the show.

The only thing different from my normal show was the set. We usually have a black box stage but the producers thought it would be fun to dress the stage like a teenage boy’s bedroom. As you’ll see in the episode, that was a very good idea. Though my show is called Sunday Night Sex Talks, we often run special editions of the show and this was one of those examples.

We shot on a Wednesday and the audience RSVP’d through my Sunday Night Sex Talks site.

I met Jojo right when she arrived and we chatted about how the day would unfold and what she was expecting from the guys. She gave me a run down of all the guys and how things had been at the house thus far.

This happened before the show began, in a sort of green-room space. I have to say that Jojo seemed exactly the same when cameras were on and off. She is fun-loving, energetic and very comfortable. To be honest, my surprise about the filming was how calm it was (outside of some drama with the guys that you will see).

Producers were not running around, calling cut a million times, forcing guys and/or Jojo to do things (from what I saw, at least). It took longer than expected because of some bathroom breaks and camera set-up changes, but honestly it was smoother sailing than I expected—or than it is on unREAL.

All the behind-the-scenes drama

I now know because I’ve seen the final episode that there was some serious drama going on among the men in the room where they were prepping their stories. I got the sense that there was tension between cast members from my conversations with JoJo. She mentioned being curious and a little worried about how Chad’s story would turn out and how he was getting along with the rest of the cast.

Now I know there was a lot of drama there, but this all went on while I was running the rest of the Sex Talks show. By the time the men came back to the room to tell their stories everyone was mostly calm—at least a few drinks in, but mostly calm. Then the stories started.

So the object of the date—and really any date—is to charm. In the case of this show it was to charm Jojo and out-perform the rest of the guys. Weelll these guys really focused on the out-perform-the-rest-of-the-guys part and forgot about the charming JoJo angle, in my opinion. It just became a massive show-off of whose story could be wilder and crazier than the next!

As you saw from the episode, these men did not hold back. I saw Jojo’s eyes widen many a time during the performances. She is an awesome sport with a great sense of humor, but I imagine (and now know from her video confessionals) that she was a little turned off by some of the guys. Makes sense.

The Chad and Evan drama at the end of the show 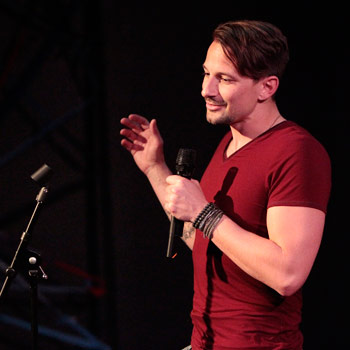 Evan Bass performs during the group date on The Bachelorette, prior to his altercation with Chad.

Yes, things got wild between Chad and Evan at the end of the show. I don’t know what went on behind the scenes prior to the performances but I do know that during the show producers stayed out of things.

I even asked a producer if they wanted me to pause the show so things could get settled but they explained that they let things run their course, which is all part of their genius.

During the show Chad was very quiet and reserved. Many of the rest of the guys were switching their seats to get closer to Jojo and they were all incredibly engaged in the performances. Chad was not. He was almost silent. Evan ended up being the second to last guy to perform, with Chad being the last. I do not know if this was intentional on the producers’ parts, but if it was, Bravo!

After Evan’s performance, which included a little jab at Chad, Chad bristled in his seat and was obviously upset. Then when Evan went back to his seat Chad swung. It all happened very quickly, but it did hush the room for a moment. Tensions were very high when Chad took the stage, and it was clear that he was going to do something untraditional up there, which obviously came true.

Some of the guys didn’t want Jojo to go down to the stage when Chad called her (I can’t say exactly who because it was dark), but she assured them it was okay. Frankly, I was nervous. I cannot tell you how uncomfortable it was in that room when Chad interacted with Jojo on the stage. You could hear a pin drop—or my heart beating—not sure. But we let it play out and then Chad stormed out and the show wrapped up.

From that moment on the mood was very tense, but my audience and I were kept in the room so producers could handle what went on next. I didn’t see what went down post-show, but I’m not surprised given how high tensions were inside that room.

Observations from a Bachelorette group date

Here are just a few things that surprised me on that day: