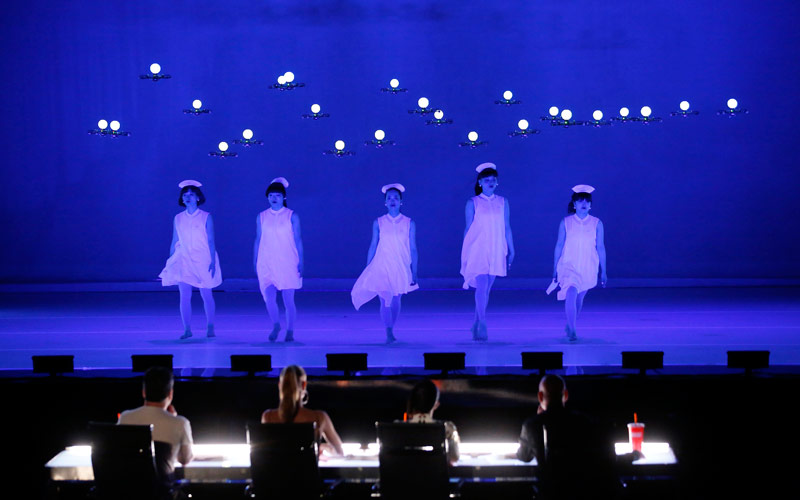 Drone usage is becoming increasingly common in reality television—see, for one example, the stunning visuals captured by drone cameras on Discovery’s The Last Alaskans—but one act on America’s Got Talent did something extraordinary with drones. The act wasn’t exactly new, though, as the group, Elevenplay, has been performing a version of it for years.

Still, it was new for AGT, and different than the projection-mapping or glow-in-the-dark performances that have become quite common. And it was definitely the stand-out act in the second audition episode, which, like the premiere, offered more of the same of what we see every season—with some exceptional exceptions.

The group’s choreographer, Mikiko, is well-known, having choreographed for the Japanese metal group Babymetal; the girl group Sakura Gakuin; and the pop group Perfume, who she worked with since they were kids.

Two years ago, Vice reported on an Eleven Play performance in Tokyo that included three dancers and three drones, plus projection mapping.

The drones in that performance, “Drone-Augmented Amazingness,” were choreographed and programmed by Daito Manabe, whose web site describes him as a “Tokyo-based media artist, DJ, programmer.”

His bio says this about his work with Elevenplay:

“In 2011, Manabe started to work in collaboration with the dance company ELEVENNPLAY to produce works using mechanical learning technologies such as computervision in order to devise new expressions of the body, and other technologies such as drones and robot arms. Those works were shown at festivals including Sónar (Barcelona), Scopitone (Nantes) and Mutek (Mexico City) and was praised by the media at home and abroad including WIRED and Discovery Channel.”

One of those collaborations, a performance called “24 Drones,” is on his web site, and looks very similar to the performance on AGT, which is below, though there were five dancers on the America’s Got Talent version. Its credits include a drone and light programmer, drone and light designers, and a motion capture system.

So this is an act that has roots that go back five years, not that that makes it any less spectacular. Watch: