American Grit concludes its first season tonight—or at least what I hope will be its first season, as the show proved itself to be a highly engaging. It began with this exceptionally satisfying start to the season and kept going strong.

Yet another thrilling challenge kicked off last week’s penultimate episode—well, it wasn’t quite the second-to-last, since two back-to-back episodes air tonight (Fox, 8 p.m.).

The winner of the challenge earned a reward, which you should keep watching to see, because there’s a twist on the family visit that definitely got the dust stirring in my house and caused my eyes to dampen.

Tony’s single-handed victory is incredible, and even more satisfying since he and his team had so many losses. The story of Tee’s team is one of the more remarkable parts about the way the season played out. She had only a single member for the past two episodes, and had just two team members for the majority of the season.

Other shows may have freaked out and shuffled or merged the tribes—er, teams—but American Grit just let Ivette and Tony, and then just Tony, keep going alone.

The challenges were modified to make that fair, with only one person competing in each round of last week’s challenge. (The variability of the team composition presented a challenge to producers, of course, and executive producer Jon Kroll explained in an interview with me how producers planned for those possibilities.) 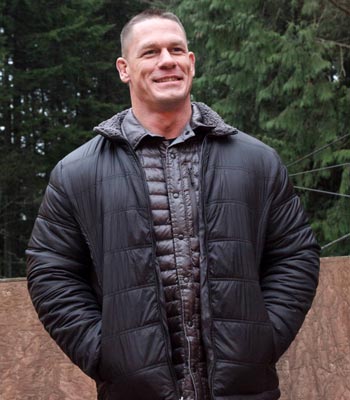 Behind the scenes of American Grit

John Cena turned out to be a strong, active host—not Probstian in his interference, but fully committed and invested, as was clear in his weekly chats with the players facing elimination.

I found The Circus obstacle course to be too repetitive for me by the end, though it served its purpose as a way to wear out the contestants before the real elimination challenge, which was always endurance-based and changed each episode.

American Grit itself endured despite ratings that were quite low. Although it grew 40 percent when 3-day DVR usage was factored in, it still only attracted a small audience. I wonder if it just seemed to familiar, teams + challenges + eliminations, or if debuting late in the season just meant people weren’t looking to start a new show yet as others concluded.

Also of note is that while John Cena’s star power did a lot for the show creatively, it did not seem to affect its ratings. Last Thursday, not even a quarter of his 8 million Twitter followers watched.

Fox surprised me by bringing back last summer’s feel-good competition Home Free for a second season, and I hope that it’ll do the same with American Grit, perhaps saving it for summer. There’s a solid format brought to life by a skilled production, and it deserves to be seen.