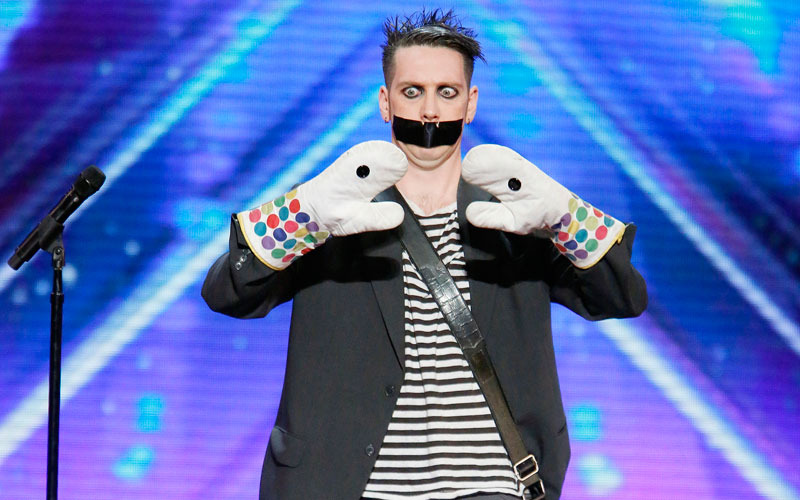 Tape Face on the season premiere of America's Got Talent 11. (Photo by Trae Patton/NBC)

Well, no. Really, it was kind of a mediocre mix (a kid reciting memorized jokes, really?) with a lot of time-wasting stupidity. I’m all for time-wasting stupidity if it has a payoff, but they didn’t. Even the stronger acts were rehashes of the familiar, like the projection performer or the young opera singer with the amazing voice.

The entire last act was included just for the site gag of Nick and Heidi falling into foam and then hugging Howie, which was fun but did we need to spend an entire segment on that?

There were two truly great acts: a mentalist/magician and a mime/clown, but those descriptions undersell how unpredictable and entertaining each was.

How did they do that?

Previous mentalists on the show have deployed somewhat obvious tricks, but I was baffled by how this trick was done. The specificity of The Clairvoyants’ act is what really sells it.

This is one of those acts that works best on this show—unexpected, fun, with actual talent involved. Sure, Tape Face Boy may be touring the UK, but I don’t mind professional and/or recruited acts that have had success elsewhere, as long as they’re entertaining. This absolutely was, and I can’t wait to see what he does next.