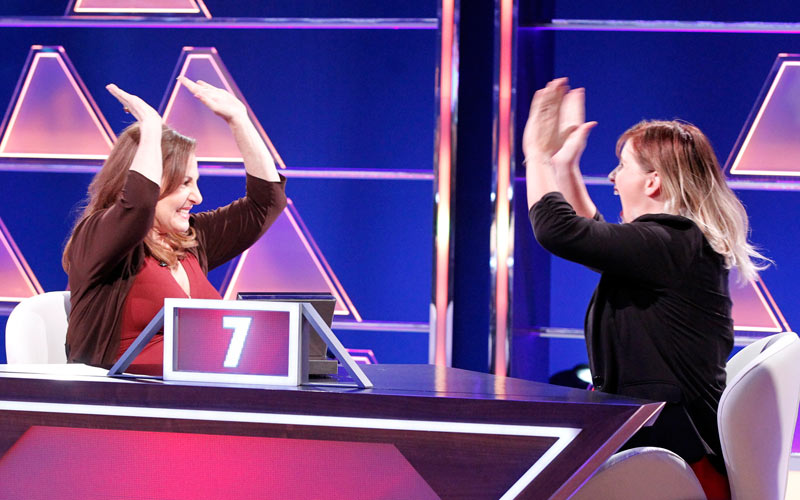 The entertainment world is sequel and reboot crazy. It’s an understandable impulse in an era when no one can quite figure out what will attract new audiences. Instead of something new, audiences get a reboot of something familiar. Sometimes resurrecting that intellectual property, or IP, works, sometimes it doesn’t, but the bets seem safer—and in such a risk-averse industry, that’s a win by itself.

Unscripted television is having a similar crisis of confidence now, with everyone panicking that there hasn’t been a huge, game-changing hit in years. Yet a young genre doesn’t have a deep well of IP to draw from; even the oldest shows (COPS, Real World, Survivor) are still going, though sometimes as sad versions of their former selves.

While modern reality television emerged from Real World and then Survivor, real people have been part of prime-time television since the beginning. The first show broadcast by NBC’s predecessor, WNBT, was Truth or Consequences, on which contestants who couldn’t answer questions had to perform some kind of challenge. Game shows have been part of the television landscape ever since.

In other words, in the unscripted world, there may not be a lot of narrative reality television to resurrect, but there is a lot of game show history to draw from.

Enter ABC’s Rob Mills, the network’s alternative programming executive, who has successfully shepherded a series of existing formats back onto the screen.

That started last summer, when he brought Family Feud to prime-time. It wasn’t exactly a reboot, as the non-celebrity version of the show, hosted by Steve Harvey, was performing well in syndication. What Mills and his team did, brilliantly, was produce the same show that’s in syndication. The only change is the addition of celebrity contestants, though really, the teams are largely unknown family members of the two celebrity team captains. It’s not as star-powered as the other shows.

The format worked, so why screw with it?

That’s exactly what Mills did with The Great Holiday Baking Show last winter. Unlike CBS’ version, which aired three years ago, the new show wasn’t an attempt to Americanize a popular UK format. It was just the British show with American contestants (and, yes, two new hosts and a new judge). Sure, Baking Show is best with Mel and Sue, but this show really succeeded creatively.

There is one unifying element of ABC’s reboots: they maintain the center, heart, and elements of the original. It’s like Star Wars: The Force Awakens, which brought back everything we loved about the 1970s/1980s trilogy.

For ABC, this approach is succeeding creatively and, usually, in the ratings. Celebrity Family Feud was the most-watched new series last summer. Sunday’s premiere of “Sunday Night Fun and Games” dominated the night—Celebrity Family Feud tied Big Brother in 18-49 ratings but beat it by several million viewers, and The $100,000 Pyramid was the number-one show of the night

There’s some takeaway here for reality TV and Hollywood, and it comes down to three simple things.

In reality television, especially, a sense of wonder and joy has gradually slid to the periphery, or it’s so forced that it’s rarely fun at all. For example, America’s Got Talent is so produced—from the audience laugh track to Nick Cannon’s reactions—you can practically hear a producer whispering, Here’s what to feel now.

The other kind of “fun” reality TV traffics in the most is the fun of mocking others. Fans of ABC’s The Bachelor/ette who love laughing at it are enjoying other peoples’ misery, usually misery that’s been carefully orchestrated by the show’s producers. I understand the appeal and have certainly participated, but even that has become forced.

Reality TV could use an infusion of pure joy. There are exceptions, of course, shows that really do allow their contestants and viewers to all have fun together.

That’s what ABC’s game shows do so well. Match Game and Celebrity Family Feud are mostly focused on laughing along with—not at—the celebrities and contestants.

The game part of Family Feud is actually not much of a game at all: Guessing others’ answers to ridiculous questions? Being able to steal all the points with a single answer? It’s not the best-constructed game in the world. But who cares, because there’s so much fun in those guesses, especially when the random or hilariously out-of-left field guesses turn out to be correct ones.

Personalities run the show, just as they do on Match Game, which finds its life in the double-entendre and witty responses from the celebrity panelists. (I think Match Game has the most room to grow because its questions were highly questionable, ranging from super-obvious [a limerick with “hickey” as its only obvious rhyme] to really challenging [creating a name for the Baldwin brothers, what?].)

Pyramid has the most solid game structure. It creates moment after moment of joy and excitement, from pairs getting seven out of seven answers in a round to winning $50,000 in the Winner’s Circle.

Watching contestants’ euphoria at winning was so very different from other unscripted shows and their artificial reciting of the stakes (I hope I win today because I need to pay my mortgage) in heavily coached interview segments.

I prefer watching someone who’s spontaneously thrilled, whether they’re winning a Survivor challenge or celebrating a matched answer on Match Game.

As budgets have constricted and fear has risen, the true magic of reality TV—watching real people do real things and react genuinely—has been lost. Whether simulations of those moments are created in editing with frankenbites or coached by producers, they’re not the real thing.

Last night, there was just a deluge of unexpected and unscriptable moments throughout the three hours. For example:

The shows were so effective at letting people be themselves and respond authentically that Alec Baldwin made not one but two jokes about a female contestant performing oral sex on him: “Stand up, we do that later, we do that after the show” he said when a contestant fell to her knees. A moment later, he repeated the sentiment: “Wait ’til you win first, then you give daddy his prize.”

ABC’s commitment to honoring the game that was born in the 1970s is admirable, but I’d also appreciate leaving the sexism back in that decade with the cigarette smoking.

ABC’s The $100,000 Pyramid would have no such thing. The six categories, arranged into a pyramid, still flipped around, as if it was 1976. Michael Strahan leaned against the railing surrounding the winner’s circle to talk the player and celebrity through the categories they didn’t get.

Match Game had the orange-ish shag carpeting and the slots where celebrities dropped their used cards, and also spun the contestants around on a turntable. The questions came from behind panels that dropped into the contestants’ platform, just like on the original. Alec Baldwin even had a skinny mic.

It’s updated, yes—there were LCD screens on Pyramid’s category board, for example; Baldwin’s mic was not corded—but all of it captures the spirit and feel of the original.

Viewers don’t just respond to the title or format of a show, but the small things that are familiar and thus comforting. That’s what draws us back to the same show decades later, and what will keep us watching if it’s done well.

That may seem obvious and oh so simple, but ABC has demonstrated it knows that’s how to tap into nostalgia. Studios, networks, and producers looking to reboot old shows—or create new ones—could benefit from ABC’s increasing number of successful examples.