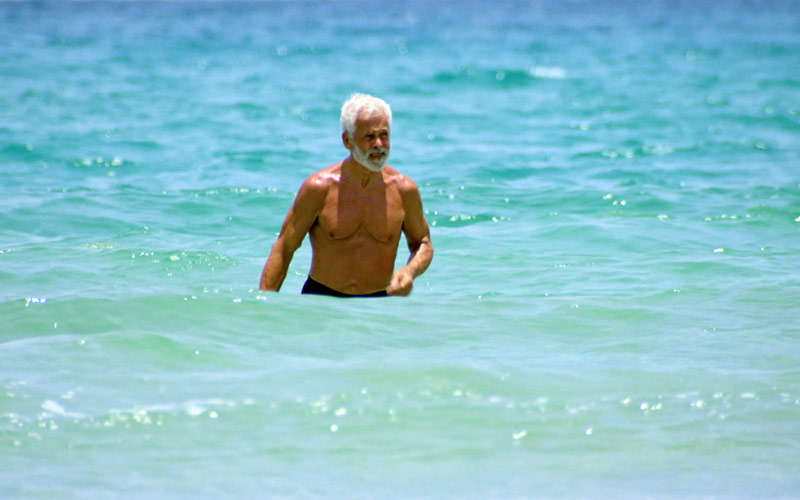 Mark Burnett might not be involved in the day-to-day, edit-bay production of Survivor like he once was, but last June he told us what was going to happen, and tonight the prophecy was fulfilled. Yes, it was the third and final medevac of the season, a Survivor record.

The penultimate episode whimpered through most of its second half, before Joe was medevaced—though removed from the game seems more accurate, since his condition wasn’t exactly treated like a life-or-death emergency.

Dr. Jeff Probst, M.D. showed up to fetch Joe, but first spent considerable time showing off his training from 30 Rock’s Dr. Spaceman by saying the obvious and making questionable pronouncements, like blaming Joe’s constipation and inability to pee on his age instead of maybe just the food he ate at the reward challenge and the general unhealthiness of binge-eating after not eating for an entire month.

At one point, Probst actually asked a man who was doubled-over in pain and bloated from being incapable of relieving himself, “What does it feel like to be this close to the end and get pulled for ironicaly something that has nothing to do with your effort in the game, but is just a function of being 71?”

I so wish Joe had said, It’s kind of hard to think big-picture now because I’m in excruciating pain, so maybe you can put me on that fucking boat and get me some help peeing, you monster? Or we can just sit here and chat and I’ll just burst all over your storytelling.

Joe’s exit seemed inevitable starting immediately after the reward challenge; the episode’s pacing was off, and it spent far too much time on casual moments at camp. There was some fun casual interaction, but that stuff is cut for a reason, and watching Joe walk around in pain for half an episode didn’t quite provide the level of game play or drama I’ve come to expect from this season. But hey, that’s reality.

As much of a non-player Joe was for most of the season, he exited as the result of a you-couldn’t-script-this-if-you-tried comeback in the challenge. He virtually walked through the jungle, fetching bags of sandbags to toss into five holes. Each contestant threw their sandbags and, failing to hit all their targets, ran back to get more sandbags, until they all exhausted their supply.

Not Joe: He had one more bag to fetch, and while everyone waited—it was the most comically lethargic challenge ever—he got them. With one target and one sand bag left, he got ready to throw, and I seriously thought he was going to collapse. But no! He hit the target, beating his younger competitors.

That sent him to a massage/food/bed reward, for which he picked Aubry, who then picked Cydney. Besides Joe’s overindulgence in beef, which the show was careful to point out so we’d blame Joe’s illness on his gluttony, this offered a true surprise in what happened back at camp: a Thai massage delivered by Tai (oh!) to Michele, following their Tribal Council blow-out the night before.

In an awkward, shut up Tai! moment, Tai said things such as, “I still remember all the words you used” and “It still stings like hell” while massaging her. Yet they did seem to be forging an alliance of sorts—at least until Aubry came back from the reward and worked her Tai magic in order to target Cydney, who she suddenly determined was a threat.

Which, by the way, I call bullshit on—this sudden revelation. For one, Aubry is too smart to suddenly realize that with days left in the game. Two, the audio of her saying that was spliced in from an unseen interview, so an educated guess is that it came from far earlier in the game. I don’t doubt that Aubry and Tai may have targeted Cydney, I just doubt that Aubry discovered it as if it was a bowl of cole slaw just sitting there in the jungle.

Ordering dinner. Any suggestion on what I should get for sides? #Survivor pic.twitter.com/dH08gjhfaz

It seems more likely than not that we’re on track for a final two. This episode was so, so slow and so little happened that I cannot imagine stretching out two hours on one immunity challenge, even if they bring back Rites of Passage or other rituals we haven’t seen recently, or spend an entire act break setting Mark free and/or eating eggs and Mark for brunch.

Probst strongly hinted at a final two to EW last week. Had they not done an elimination when there was a medevac, they could have still managed a final three, but a final two seems to be where they are.

The teaser for the finale included Probst saying over the narration that Tai is without any safety nets, so his remaining idol is now null and void, since there was no Tribal Council to play it at. How will his erratic decision-making affect his chances with the jury, if he makes it that far? Will Michele and Cydney keep up their secret two-person alliance? Will Aubry manage to keep playing everyone so well? And can I drag out this recap any more since there really isn’t anything else to write about?