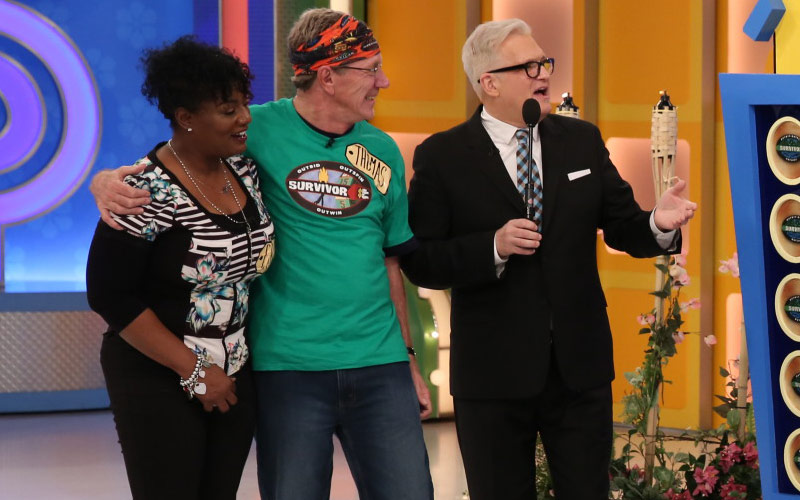 Seven years ago I was called down to contestant row on the Price Is Right, but—as a game show fanatic I hate to admit this—I never made it out of contestant row. So it should come as no surprise that when I saw an article that the Price Is Right was doing a Survivor prime-time special, I immediately called my dad, who had recently retired.

“Dad!” I yelled over the phone. “You and mom have to come to LA for the Price is Right! This is what life and retirement is all about!”

For nearly 16 years my family has loved Survivor and has never missed an episode, so I was able to convince my parents to book a flight to LA for the taping. One of my best friends from high school, who currently lives in San Diego, also joined us. Since I was ineligible to get on the show—you have to wait 10 years to try again—it was my mission to get one of them on.

The morning of the taping I gave my parents homemade Price Is Right t-shirts with a customized Survivor logo: OUTBID, OUTSPIN, OUTWIN. We went to a diner at The Grove near the CBS Studios and I put them through “How to Get on the Price Is Right” boot camp:

On the CBS Television City lot

As soon as we arrived to CBS we were given a number and a questionnaire, which was atypical. The questionnaires were all about Survivor, which I loved! It asked questions about favorite contestants, seasons, challenges, et cetera. It made me feel like they were going to do their best to pick true superfans and to match people up with their favorite players.

My parents and friend Anne filled out their questionnaires, and I urged them to put down some answers that could potentially match them to former players that were likely to be on the show.

It was a blast interacting with Survivor superfans in the holding area: There was a woman in a dress with Survivor logos all over it, a sure bet to get on (and she did with Tina); families and friends in customized Price Is Right: Survivor t-shirts; fans dressed like Jeff Probst; and even a woman who had a printout of the YouTube page for her audition video. I’m sure there were some seat-fillers among the crowd, but overall the audience was packed with fellow superfans.

When it came time for the interview process, my family was ready! By this point we had already befriended everyone around us and walked toward the casting director chanting the Survivor theme song. The casting director walked down the line asking people their names, hometown, and job, plus a few Survivor related questions.

Out of our group of 20 or so, he spent the most amount of time talking to my friend Anne and my dad Tom. They crushed it!

When my dad was asked who his favorite contestant was he immediately responded, “Russell Hantz,” drawing some gasps from the people around us. He owned it and further elaborated on how he loved that Russell changed the game forever through aggressive idol play. My dad said he roots for villains like Russell, Parvati and Jerri who stir things up and make the game interesting. By the time our group moved on to the next holding area several people came up to us saying for sure Anne or Tom would get on—we could only hope!

Survivors on the set of The Price is Right

After nearly four hours, we finally walked into the Price Is Right studio. My parents both had the same initial reaction, like so many others: they were shocked at how small the stage and studio was. My dad said it felt like an out-of-body experience walking into a TV show he’s watched over the years. My mom loved that the studio was decked out in Survivor props and that the stage was so colorful and vibrant. None of us could believe we were actually there together.

My family was seated toward the back near an entire section that was roped off and marked by small tiki torches, the area for the former Survivor contestants. We were shocked that there were so many seats. We knew nine former Survivor players would be on the show, but there was room for nearly 30. Anticipation grew for who was going to show up.

Once everyone was seated—after I made my family dance while we were waiting—the executive producer came on stage to thank all of us for being there and went through an overview of the taping. When he was done explaining the logistics, he asked us if we were ready to meet the Survivors. Immediately everyone jumped to their feet and began screaming. We turned our heads as the group of former Survivor players walked into the studio.

It’s an understatement to say I lost it!

One thing I immediately noticed was some contestants had two buffs, a sign that they would be called down to contestant row because they would give one of their buffs to the superfan they were paired up with.

A family of fans face to face with Survivors

As I scanned the crowd of former Survivor players, it hit me how epic this experience already was. Here we were—a Midwestern family that loves reality TV game shows—standing feet away from some of our all-time favorite contestants. For most of the contestants, it looked like they were enjoying the experience as well, high fiving fans on their way in, laughing and smiling with one another, and cheering right along with us.

Out of all the classic players, Boston Rob seemed a little out of it and tired, almost as if he had to be there. I mean, if I had to be on Survivor four times, I’d die a happy man.

Now if you think the crowd went wild for the former players, multiply that by a million (pun intended) when Jeff Probst came on stage! The crowd went crazy while Jeff stood there grinning with that ear-to-ear Jeff Probst smile and dimples. Once he was able to calm us down, he thanked us for coming and then knocked out some host copy and the intro of the show. After Jeff Probst did his thing, he walked off stage and we weren’t sure if he was done.

Next up—game time! It was the moment of truth: Would someone from my family get picked?

Come on down! You’re the next Survivor fan

Since this was a special episode, there was an added element to being called down to contestant row. Once a superfan was called down they were then paired up with a former Survivor player. Superfans were told to meet their partner in the aisle, head down to their bidding booth, put on one of their buffs, and have fun for the rest of the show.

If you’ve never been to a taping of The Price Is Right, know that it’s extremely loud in the studio, so it’s actually really hard to hear what is being said by the announcer and even, at times, Drew Carey—especially at the top of the show. For this reason, when they announce contestants, they also hold up huge cue cards with names written on them in case people don’t hear their name.

As the show began, I giddily looked at my parents and my friend Anne and wished them all good luck. Seconds later, I faintly heard “Thomas Walter, come on down!” Looking at the stage, the cue cards confirmed it—THOMAS WALTER written in large black ink.

I Immediately jumped out of my seat while my dad didn’t hear his name. Soon after I went bonkers my dad saw his name on the cue cards and was completely stunned. Our entire row went nuts. Forgetting momentarily that he was paired up with a former player, I looked toward the stage again and saw CIRIE FIELDS written in bold letters. Mind blown again! My dad was paired up with one of our all-time favorite Survivor players, Cirie!

As my dad escaped our row, met up with Cirie, and headed down to contestant row, I remember looking at my mom who was hysterical and on the verge of tears. Embracing, jumping up and down—we couldn’t believe it.

My dad not only got on the Price Is Right, but more importantly he got on the primetime Survivor special.

If you haven’t watched how it all went down, I urge you to watch the full episode. It’s an understatement to say the entire experience was surreal, a dream come true and one of the best moments I’ve shared with my parents in my 31 years.

My dad went on to have Jeff Probst hand him $25,000 in the classic Punch-A-Bunch game and almost won the showcase showdown against golden boy Joe.

What happened off camera

Living my Price Is Right: Survivor experience in the moment and now reliving it on TV was a dream come true.

So much of my life—and my family’s—has revolved around Survivor: making my family play a full-scale version of the game; creating a small adventure company called Reality Rush that runs adventure team building events; having a travel blogging lifestyle that’s focused heavily on backpacking adventures to tropical locations like Pulau Tiga, Borneo.

It’s beyond surreal now being able to add to the list my dad winning $25,000 on the Price Is Right with Cirie—and hopefully soon me becoming #SoleSurvivor on the real show.

For the past 16 years, my family has supported my Survivor obsession because our common love for Survivor is one our strongest ties. I will cherish this memory with them for the rest of my life. My mom and dad have given me so much throughout their entire lives that I hope they spend the winnings on a Survivor-inspired adventure.

Sure, I made both my parents agree to splitting any winnings 50-50 with me if either of them got on (Dad, remember that?!). The truth is sharing this Survivor experience with them was priceless—but I’ll settle for $12,500.

Justin Walter is an LA-based travel blogger and writer who shares his travel adventures and tips on his blog, Around The World with Justin. As a Survivor superfan and reality competition show junkie, Justin also founded a company called Reality Rush that runs team building events based off of popular reality TV game show formats.