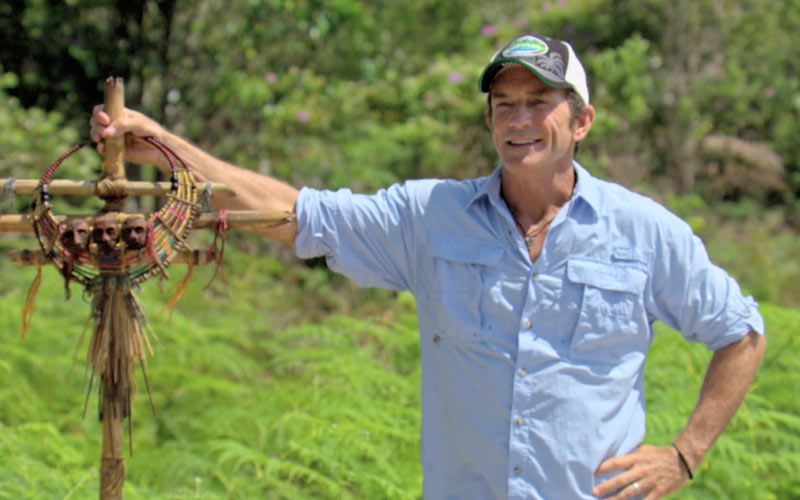 A few years ago, I wrote that you’d murdered Survivor. It was a harsh assessment, yes, but written in the aftermath of one of the series’ lowest points, bringing back an unstable person and then treating that as a moment instead of a disaster.

The piece may have had an incendiary headline, but I concluded saying the show had a “sad future” with “volatile personalities instead of strong personalities; drama over game play and character development; and a relentless focus on the things Jeff Probst values.” In the three years since, we have seen those things manifested, but we’ve also seen some great decisions and creatively strong seasons, including Blood vs. Water and Second Chance.

So while Survivor may have changed, it has also continued to thrive under your leadership, both creatively and in the ratings, and that’s to be commended. We’ve also had some exceptional seasons these past few years. Sure, a few were absolute duds, but that’s reality television. You cast the best group and create the best context you can, and see what happens.

I might not always agree with your decisions—casting certain people, the Tyler Perry Idol, Redemption Island—but I’m appreciative of the way you experiment and try new things. And I’m happy to be proven wrong when one of those things delivers great television.

That willingness to experiment explains why Survivor hasn’t stagnated like other older series have, and why it remains a series that’s consistently entertaining, a show that changes people’s lives, literally and gave me a 14-year tradition with a friend.

Creative choices aside, your team and the Survivor production crew continues to do exceptional work that’s setting a high bar for the rest of reality television. From the placement of a locked-off GoPro in a challenge to give us a unique perspective on the action, to the production on the often-insightful Ponderosa series, their attention to detail and elevated work is apparent and appreciated by all of us who love Survivor.

I’m incredibly grateful and fortunate to have visited locations three times and experienced that team’s professionalism and skill first-hand. Watching an episode, their work fades to the background; it’s easy to forget there’s a camera operator standing in the ocean while the Survivors splash around and talk strategy, just as it’s easy to forget how many people it takes to build a challenge that looks so great. Whatever the reason was that CBS and/or SEG revoked my press access to location visits and post-eviction interviews, that hasn’t changed my love for this series, which burns strong almost 16 years after it began.

There are three things, though, that desperately need your attention, and would so improve the show for those of us who love it so much. On the eve of Survivor’s 32nd finale, and the start of production of Survivor 34, I wanted to offer those to you, because we both do care about the same thing: the quality and continued strength of Survivor.

I know season 33 is in the can, and pre-production on S34 is basically complete, but you can change these three things about the next season without spending a single dollar—yes, they’re free!—and without changing a single thing about your plans for season 34. You have 100 percent of the power to do these things, or at least consider them.

Your color commentary on challenges was one of the early highlights of Survivor. It has gotten out of control.

Sure, I love the double-entendre, even if it is intentional, and also calling out moments we may have missed. Unlike other hosts, you don’t have to rely on ADR to compensate for what you failed to say on location.

But the constant narration of every single thing has reached a point of absurd saturation to where we now hear you say the same thing multiple times, sometimes in the same sentence.

Two years ago, in a Reddit AMA, you explained that this started in Thailand and that CBS liked the honesty of your reaction and no longer insisted on you being neutral. But we need you to be more neutral than you’ve become—especially since you’re in charge of the entire production, and playing favorites has no place in a challenge that is otherwise completely fair.

Your challenge team has created games that are challenging enough that there’s no need for you to try to challenge the contestants more with your irritating comments.

Please, just let us watch the challenge and experience it free of unnecessary chatter. We know what just happened because we saw it happen! Absolutely, say something when the situation or moment warrants it; I trust you to know when that is, and to know when you’re just talking to talk.

One of the reasons I was so eager for you to win the first reality TV host Emmy as host was because you so effortlessly great at hosting Survivor. In the eight years since then, however, too much of that hosting effort is now on screen, as we see you both hosting and producing at the same time.

It must be super-frustrating to interview people for 45 minutes or an hour and get very little from them, either because they’re being secretive or because they’re not being strategic. But maybe try a new thing: letting the audience feel that frustration for themselves.

I’ve joked that, at times, it feels like you’re dragging out a whiteboard and showing the contestants what their next moves should be. That feels manipulative and like you’re trying to control the game, rather than letting it play out, even though I’d guess the motivation is actually just trying to make better television.

That also happens in moments like Joe’s medical evacuation, which seemed dragged out to create television. Joe was exiting the game because of excruciating pain, yet he—and the audience—had to endure an extended conversation.

Please stop producing when you’re on camera. The stories are there, and they will come together in post-production without on-screen intervention.

And if the Survivors aren’t doing what you think they should be doing, well, that’s the game. The behind-the-scenes talk that production is getting increasingly heavy-handed in the game—such as through leading or misleading one-on-one interview questions—is distressing. I’d hope that it’s all motivated by a desire to make better television, but it needs to be stopped, now.

The integrity of the game matters, which brings me to:

You said this long before Redemption Island, so you may have changed your mind. As I said before, I’d rather the show try new things than stagnate, even when I don’t like those new things. But you were so right to remember the core of the game and what it’s about. Please keep that in mind with every decision you make.

We may have fundamental disagreements about “the differences between men and women,” Jeff, but I hope we can both agree that sexism does not need a platform on prime-time national television—especially from its host and executive producer.

Please remember that this is what you believe, because it informs how you treat the contestants, and leads to highly unfortunate moments such as ignoring a female winner at the reunion. It’s okay if you value masculinity and masculine traits more than feminine traits in the game of Survivor, but save that for your chat with Dalton Ross. When you’re on camera, please don’t focus only on what you care about.

Remember that we fell in love with you as a host because you were our proxy, asking questions for everyone, not just yourself.

You are correct. Yet in the last year, we’ve gone from this to this. Why? We’ve also had needless suffering. Please find ways to stop all of that.

That one sentence says everything. Sure, most of us never thought Rich would win, even up until the very last episode. But he did, and what that means is none of us can predict how the game will play out. Just letting it play out is the key. Let the challenges happen; let Tribal Council happen; let Survivor happen. Trust in Survivor, please!

You’re a good steward, Jeff, keeping the show that we all love alive and strong, and I don’t doubt your commitment to the show, the crew, and the diverse and crazy group of people who are its fans. When you’re on location and on camera later this month, I hope you’ll keep these things in mind.