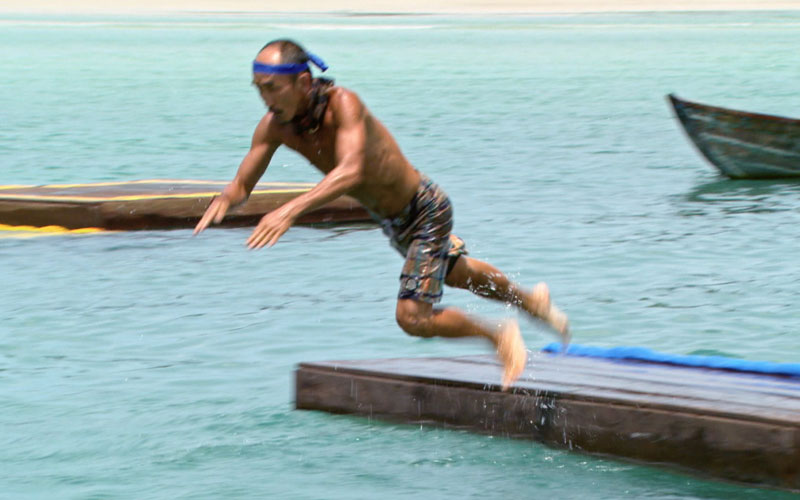 A metaphor for how Tai Trang is playing Survivor. (Photo by CBS Entertainment)

Survivor Kaoh Rong‘s 12th episode felt like the kind of episode that worked hard to convince us that the obvious outcome wasn’t going to happen. While Jason was voted out nearly unanimously, there was true dissension, and a real rift in the remaining alliance.

That rift’s name is Tai, and as much as I like him as a character and person, I have no idea what kind of game he is playing.

He played his extra vote, for Michele, giving her two votes, moving forward with his plan to drop Michele even though his alliance wasn’t with him. Every other person voted for Jason—well, except Jason, who voted for Joe. Interestingly, in his efforts to get rid of Michele, Tai reached out to Jason, but Tai’s previous betrayal led Jason to not trust him. It wouldn’t have mattered anyway, but it was proof that the game Tai is playing may hurt him.

Tribal Council was mostly about the airing of grievances against Tai. Michele was particularly brutal—but accurate!—saying “Tai has turned on every alliance” and telling him, “I was more original in this alliance than you were.” That was an argument that appeared directed at the jury, as in, here’s why this guy you like shouldn’t win, should he make it to the end.

Playing to the jury now makes sense, especially since Tai is already in the final four, with his immunity idol that he’ll play next Tribal Council. He’s now just one immunity challenge away from a guaranteed spot in the final three.

At Tribal, and earlier, Tai did the thing where he talks and reveals things and I shout at the TV, Tai, shut up! The big thing he revealed was that “there’s a smaller group within the big group,” and I’m curious if this is true and if so, who exactly is in it. Is it just Tai and Aubry? Tai, Aubry, and Cydney? Joe’s such a non-player that I can’t imagine it’s him—his reaction to everything is like, Whatever.

Speaking of Aubry: She’s playing the game Tai should be, recognizing that Michele is a threat but also using Michele to get rid of another threat, Jason, without alienating Michele pointlessly. For all the talk of voting blocs, this really does seem like a solid alliance, with some frayed edges that have been clipped off.

At least the stain on the tribe was finally removed last night.

Goodbye and good riddance to Jason. His final episode in the game was mostly spent whining “no one will strategize with me” and “no one’s playing the game any more” (has he been paying attention?), and playing the “one card” he had left, the “lazy card” (um, that card has been on the table all season)

He did do an excellent job during the reward challenge of leading his team to a win, though it seemed like an extension of his bullying at first. There was some great contrast with Probst saying “this is all about teamwork” and then the editors cutting to Jason screaming things such as “Tai! Come this way!”

But it was a lesson in contrast, with Joe (“you don’t listen to me”); his white, white butt; and his teammates unable to come together. “You dumb ball!”

That was an awesome challenge—I hope we see it again, especially pre-merge, because it’s such an excellent way to test teamwork and leadership.

So, too, was the reward challenge, which was a nice twist on a balance challenge—and became a puzzle challenge, at least for Joe, whose misspellings of “immunity” became increasingly comical. (Probst was oddly prim about that comedy: “it’s funny until you get to Tribal,” he said.) I was fascinated by how many of them managed to hold pieces of what appeared to be 2x4s in their mouths.

That challenge worked up to a tense ending, with Cydney’s slowly-but-surely strategy seeming to pay off, until Jason caught up again, and then in the final seconds lost everything.

Nice work, gravity! And excellent work, monkey that immediately leapt onto Jason’s head at the animal refuge. If only it’d crapped on Jason the way he crapped on this season.