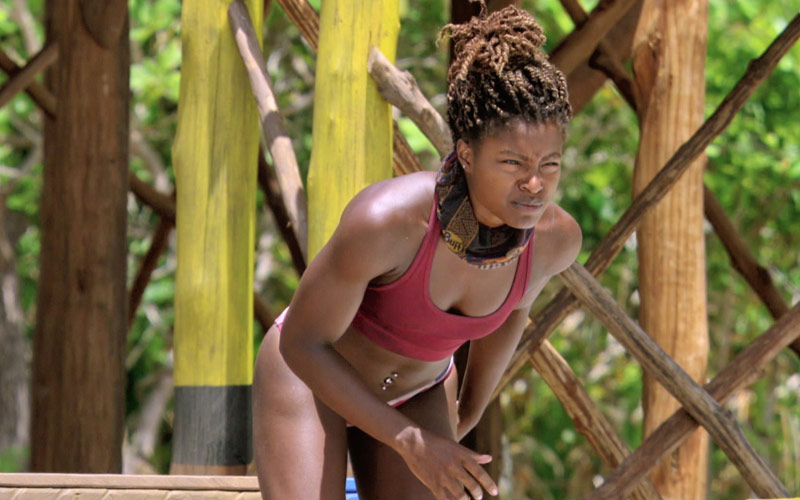 Cydney Gillon during the finale of Survivor Kaoh Rong: Brains vs. Brawn vs. Beauty. (Photo by CBS Entertainment)

At the start of Cydney’s episode of Ponderosa, she talks to the camera about how there’s “definitely no bitterness” between her and the other Survivor Kaoh Rong players, and how she worked things out with Jason, especially. Despite being emotional moments earlier, she’s cheerful and without a trace of resentment.

If only members of the dumb, angry jury was as cool as she is. If you liked Cydney Gillon in the game, this should cement your love for her. Besides being a terrific player, she’s extraordinary at dealing with the response she gets from some of the jury members.

Spoiler: that response is oddly similar to what happened to her during the reunion, i.e. being completely ignored by Jeff Probst.

When Cydney arrived at Ponderosa, only Joe, Debbie, Neal, and Nick all greet her.

The others—Scot, Jason, and Julia—don’t, and they’re proud of being unkind assholes, at least according to Jason, their leader: “She’s burned a lot of people, so she really didn’t get a greeting from everybody—myself, Scot, and Julia just sat there and just continued eating our dinner.” He says this while grinning proudly.

Dear Jason and Scot especially: It’s a game. You got played. Be upset and disappointed, sure, but get over it. Shit.

Fact: Scot was at Ponderosa for 10 days before Cydney arrived, and he’s still sullen and indignant, because that’s how pro athletes behave when they lose a game.

Interestingly, Nick—whose final Tribal Council jury performance did not impress me, with his condescending lecture, shows a lot more self-awarness here. First he tells the camera “there was discussion beforehand” to not greet Cydney. He also says that he doesn’t understand that: “You played the game, you did well, you did better than us, you made decisions, and some people can’t accept those decisions. Some people can’t accept the truths of this game.”

Indeed. Debbie says, “they’re just immature.” See? Even Debbie gets it, and I’m not sure Debbie knows where she is. (I kid Debbie!)

Cydney astutely analyzes the situation by saying that when Scot and Jason are “separate, they’re quiet. When they’re together, it’s like this whole big show of stupidity.” And she also explains why she’s so unflappable: “I don’t deal with adult children. So if people want to act like children, I’m going to treat you like a child.”

Well, Cydney deals with those children unflappably, instead of, say, doing what I would have done out of anger, like putting them to bed early and telling them Santa Claus is real but their behavior was so bad it means he’ll never visit again except to look at them while they sleep and shake his head in shame and disappointment, and cry tears of acid that will drip through the floorboards and open up the gates of hell for them.