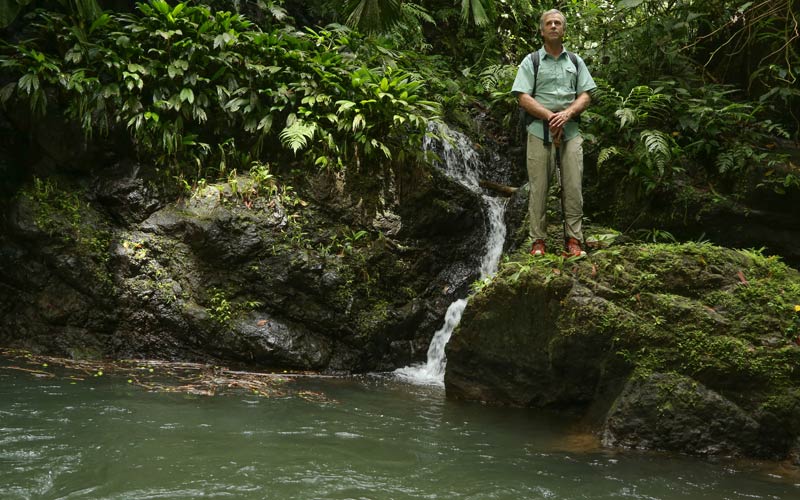 Roman Dial in Costa Rica, searching for answers in the disappearance of his son, Cody Dial. (Photo by National Geographic Channels)

When the 27-year-old son of a National Geographic Explorer disappeared in Costa Rica, the dangerous Corcovado National Park, in July 2014, no one knew what happened to him. Official searches, documented in this Men’s Journal story, turned up no trace of Cody Dial, but his parents, Roman and Peggy Dial, didn’t give up. They returned with a camera crew and two investigators.

The resulting six-episode series, Missing Dial (National Geographic, Sundays at 10) and has “a conclusion no one expected,” NatGeo says, and promises this: “The mystery will be solved.”

The true-crime series that have followed in The Jinx‘s wake have offered compelling stories but not much by way of resolution, especially Discovery’s ambitious, real-time series Killing Fields, but also Making A Murderer, which was more about the injustices of the justice system. So an actual conclusion will be welcome—not just to viewers, of course, but also to Cody Dial’s family.

In this series, NatGeo says,

“Roman, along with a former DEA special agent and a retired United States Air Force pararescue jumper/wilderness expert spent nearly eight months in Costa Rica. There, they interviewed every witness, interrogated every suspect and trekked deep into the jungle in pursuit of new leads. This series pushes further and digs deeper into the mystery, retracing Cody’s last-known whereabouts and using hidden cameras and fake identities to uncover a web of lies, surprising clues and a shocking plot twist that rivals that of a blockbuster movie.”

The series is produced by This is Just a Test productions, which also produced TLC’s I Am Jazz and Animal Planet’s Ice Lake Rebels.