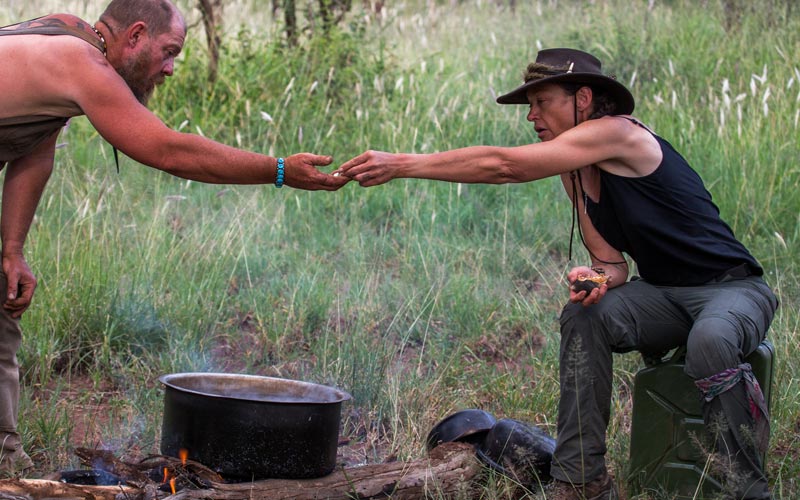 In September 2013, Manu Toigo was on Discovery’s Naked and Afraid in Panama, filming the “Double Jeopardy” episode, when she was bitten by a mosquito.

Once she returned to the U.S., headaches, fever, and bleeding led to hospitalization, where doctors eventually realized that mosquito had transmitted dengue fever. Her recovery was slow, and required physical therapy due to what she called “debilitating” physical therapy and nerve damage.

Yet less than two years later, she was eager and ready to embark on yet another challenging—and televised—survival experience, Mygrations (National Geographic, Mondays at 9 p.m.), on which a group of people follow wildebeest across Africa, from Tanzania to Kenya.

It was actually her third survival television show. Manu first appeared on the “I, Caveman” episode of Discovery’s Curiosity, and when she was approached about Naked and Afraid, she said, “I jumped at the opportunity. This is what I love to do. I had flashbacks to when I was a child a growing up on the farm, and I thought, I know how to do all of this.”

Manu knew the Discovery show, which would ultimately leave her hospitalized, “was going to really test my ability—not only in survival skills, but how it would affect me physically and psychologically. How to adapt to the environment,” she told me when I interviewed her last week.

When Mygrations casting found her via Twitter, she was still craving experiences in nature. “To me, it felt like life began at 40, and being in Los Angeles, and being in the States, I kind of felt myself disconnecting from nature. Realizing how it fulfilled my needs and my passion—all I want to do is be outdoors, all I want to do is to be able to explore and observe nature.”

Manu, who is teaching wilderness survival in the Los Angeles area to kids and, soon, to adults, told me, “We have become so disconnected that we’re not thinking about what we do and how it’s affecting nature. Everywhere I’ve traveled so far, all I see around—taking in the beauty, of course—I’m seeing lots of trash and garbage, lots of grafitti and disrespect for nature. By doing these shows and going out to explore different places, it’s my way to observe, connect, and educate myself so I can bring it back and be able to share.”

The difference between Mygrations and Naked & Afraid

The way Naked and Afraid is produced—with a two- or three-person crew—”was very simple and it still remains personal,” Manu said.

“The interaction with us wasn’t necessarily in our face, or consistently stopping us from what we were trying to achieve that day. They’re only with us a very small duration of the day, and the rest of it is up to us. So, it did allow [me] to have that spiritual connection in the wild, being in a hostile environment. It allowed you to have full spiritual growth.”

So filmed “did not disrupt my experience and what I took from it,” she told me. But Mygrations was very different.

“It was certainly a much, much larger production. There were bodies, vehicles, several cameras. There was a massive production along the way,” she said. “It did take away some of it, but for me, I made a conscious effort every day, every moment—it’s really difficult when you’re struggling with exhaustion and thirst and hunger. But it was a little easier because it was a much larger group. There was a significant amount of extra support, not only from the people that participated along with me, but also from the crew.

Manu said that crew included Masai park rangers who were there “specifically to protect us” from predators such as hippos, lions, and hyenas. They also trained the group on “how to react when we’re being stalked by one of these animals.”

Although Manu said “you really had to keep your eyes open and keep into a tight circle” to avoid predators, “the truth is, I never had any fear. I didn’t have any doubts about whether or not we were going to be in any danger at any time, but there were several moments, several times, where things got a little too close and personal on certain nights,” she said, such as when some animals “detoured toward us instead of toward the wildebeest.”

Having the rangers there didn’t detract from the experience, though, but instead made it “even more inspiring,” she said, because they “lived and learned from the land, and it was there essence that encouraged me to take in whatever I could.”

Surviving the herd of other people

The first episode focused largely on conflict between the herd, and several people dropped out because the challenge was too much for them.

Manu’s previous survival experience offered her a way “of helping those in my group,” she told me. “Because I’ve had several experiences with starvation and dehydration, and physical exhaustion, and mind exhaustion, I understand what my body is going through.”

“The endurance part of it was probably the most difficult,” Manu said. “It even surprised me how difficult that terrain was to walk through on a daily basis on little or no food or water, because the land is so rough and very uneven,” she said. “And then you had to be aware of your surroundings consistently.”

And those around her presented another layer of challenge. “I’m a very mellow, chill person. I’m more of the observer of behavior and the environment. It was very difficult when tensions did rise amongst the people, because in my mind, it was like, We all need each other. We need to support each other. Forget about the egos, forget about the attention-seeking behavior. We need to really, really focus on trying to get us all through this.”

“When you are in put in an environment that you are uncomfortable with,” without “access to fresh, clean water and a nice, healthy meal three times a day, that really changes a person’s mindset. It changes their physiology with how their body reacts and how their mind reacts to that different situation. You are switching over gradually to survival mode.”

But that’s something she knows well—and is now well-known for.

When the production company reached out to ask her to apply for Mygrations, Manu said “it did mean a lot to me, the feeling of being recognized as a very capable person to endure and face a challenge like this, especially at my age. I’m very proud that I can be 47 years old and be able to do really extraordinary things still.”

Manu said that people often tell her, “I wish I was brave enough to do what you do,” and she tells them, “Never underestimate your own strengths,” even with “challenges they face on a daily basis.”

“There’s fear that’s embedded inside of them that stops them from doing” all kinds of things, but “if they’re facing their fears, and overcoming them, it changes them significantly. That really does prepare you for the next thing, the unknown that could be around the corner.”