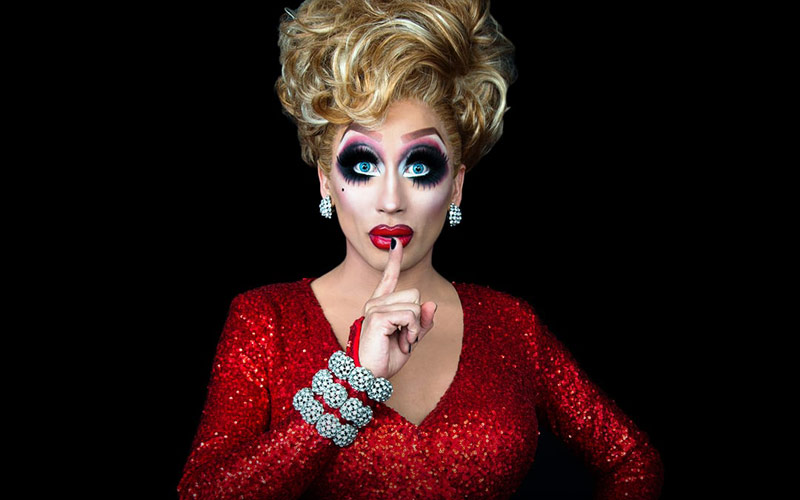 Bianca Del Rio's Rolodex of Hate, a Vimeo original, aired on Logo May 9.

RuPaul’s Drag Race continued its odd tradition of delaying its season finale by a week, but this year, Logo gave the timeslot plus 30 extra minutes to season six winner Bianca Del Rio, for a broadcast of her stage show Rolodex of Hate, which was filmed in Austin last fall and was sold on Vimeo starting last December.

I was so excited to see 90 minutes of Bianca, who I really liked on Drag Race. But the 90 minutes got off to a rough start, with Bianca’s shouty delivery distorted by the weak production values which—besides Logo’s lack of high definition—made the special feel like it was filmed in 1985. That date would have at least made the alleged jokes make more sense because they felt so outdated.

Asian penises are small. Lesbians watch tennis. Really? This is the best a smart, talented drag queen has to offer?

Bianca starts with a lecture about how “people get offended too fucking easily lately,” but then almost immediately identifies a hypothetical “fucking nasty white Jewish bitch in the back” who “didn’t pay for a full-price seat.” (Logo bleeped out the word “Jewish,” but a review of the Vimeo special quoted that line.)

Yes, an absolutely pointless anti-Semitic stereotype is what passes for humor here. (For what it’s worth, the raucous audience seems to love nearly everything.) She suggests she’s going to talk about issues—great!—but instead it’s just more of the same.

A Cosby joke becomes generalized to “a black man.” A funny joke (“What is a drag queen with no luggage? A man! A man!”) becomes about “the only black woman in Wisconsin,” whose “wig” gets mocked along with her weight. Later, Bianca takes an experience with one person and generalizes it to “what you know from a black woman,” but does nothing except repeat stereotypes.

Bianca also says this woman is “dark as dark.” What the holy fuck? (If this doesn’t seem bad, here’s why colorism is a problem.) Later we learn that this woman actually helped Bianca, which makes this exhausting stream of racism even more baffling.

Bianca’s targets are people who are already targeted, and punching down while rarely making fun of herself seems entirely lazy.

Sure, there are a handful of decent one-liners, and a few jokes that spring from her personal life, but even those get interrupted for remarks that would seem more like Big Brother’s houseguests’ bigoted comments than jokes. Being taken to a psychiatrist as a young gay kid? Awful, but for sure a possible source of deeply felt humor—except it quickly becomes a target for come the xenophobic jokes about the psychiatrist’s Indian surname, which prompts a contradictory mix of stereotypes with mentions of curry and terrorism.

Maybe, just maybe, you could argue that a psychiatrist who treated a young gay kid is worthy of some scorn and understandable hatred. But what of the audience members who wasted their money on this show? Some of them get targeted with brutally, pointlessly mean insults. In a remarkably hypocritical moment, Bianca goes from mocking a woman’s hair to complaining about cruelty on social media directed toward Bianca.

Contrast all of that awfulness with the kind of jokes in this (ultimately highly misleading) trailer from Logo:

I’m sure some of my disappointment came from discovering this standup special part of Bianca Del Rio, not the edited version of her Drag Race persona. But mostly I was disappointed because I expected her to be smart and witty, and there was so very little of that. With the misunderstanding she says she’s experienced in her life, never mind all the possible external sources of humor, there was so much possibility here, and it was just squandered.

I love aggressive stand-up and jokes that push boundaries, or just ignore them altogether. Bad language? Raunchy humor? Sign me up!

I’m also a fan of transgressive humor, and think jokes about super-serious parts of our lives can be a way to reveal truths and help acknowledge otherwise inexpressible feelings. Comedians should be able to joke about whatever they want.

But repeating hurtful stereotypes is not humor. Mocking those who are already shit upon by our society is not funny. Screaming “fuck you!” every other phrase isn’t wit. It’s a waste of 90 minutes and some otherwise exceptional talent.