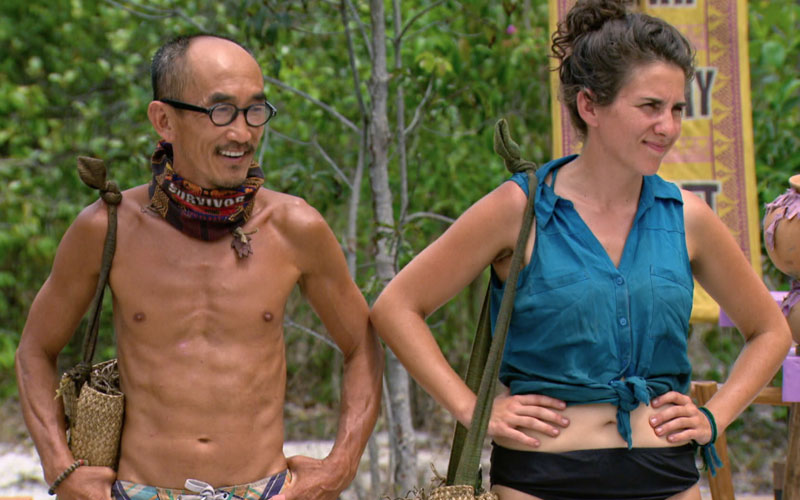 18 seconds. That’s how much time elapsed on screen between when Jeff Probst said Scot was voted out of Survivor Kaoh Rong, and Tai looked back and forth at his two alliance members sitting on either side of him, Scot and Jason.

Eventually, he shook his head no, and my living room erupted into cheers and applause. No, Tai wasn’t going to play his idol to combine it with Scot’s to make a super-idol. No, he wasn’t going to stay loyal to the two people who’ve behaved so disgustingly. Yes: Scot was voted out of the game—and, as a bonus, an idol was in his pocket, so the super idol is dead, finally.

That Tai turned on Scot and Jason in that moment was not what I expected would happen. Everything Tai said—”this is war,” yadda yadda yadda—and has done up until this point suggested he was trying to ride the S.S. Asshole all the way to the end. I expected he had the same attitude Julia did: take the gross people to the end to easily beat them, although I always think about the fact that means rewarding bad behavior with $100,000 in runner-up cash.

What’s even more remarkable about that conclusion was that it came after an episode of setbacks. As the episode began, I was already at the point of having this reaction when Scot or Jason open their mouths. And then when Jason won immunity, I had this reaction.

Then Tai won an extra vote, giving the awful alliance a super idol and an extra vote; they seemed invincible. On top of that, Julia continued to work secretly with Scot, Jason, and Tai.

But at the start of the episode, Tai said, “it’s all about mending relationships again,” and he made good on that. And he was clearly disconcerted with Jason and Scot steamrolling him constantly.

Compare their behavior to Aubry’s brilliant pitch to him: “I want you to be comfortable. This is your game; you’re making a big move. I’m telling you: you have three people behind you.” It wasn’t just ego-stroking, she was right, though the ego-stroking certainly didn’t hurt.

The two challenges both involved ceramic pots. On April 20. 4-20. Pots. An atypical number of pots. Though it would have required some significant advance planning, if it wasn’t the Survivor challenge team being playful, it was quite the hilarious coincidence.

I appreciated the reward challenge’s twist, having the players choose which reward they were competing for. That not only sends a kind of message—Scot and Jason were so cocky they competed for food, though so did Michelle—but it also creates three different challenges in one. Trying to tempt people to drop out always works, but I think I like this version better.

The only truly dramatic part, though, was Tai versus Aubry at the end for the advantage. In the first round, both Jason and Scot dropped quickly, giving Michelle the bacon cheeseburger reward; in the competition for letters from home, Julia beat Joe, who I guess is still on this season, but she didn’t exactly do anything to beat him.

Meanwhile, Scot laughably said of he and Jason, “we’re being the bigger people” and “showing our maturity” by threatening Aubry, telling her to vote out Cydney and then “everything goes back to normal,” i.e. they stop acting like single-celled organisms.

Though this move was Tai’s to make, it seems like Aubry’s victory in many ways. Julia is basically playing both sides, Joe is a non-player at this point, and Michele’s game is almost as invisible as Joe’s. (Both Michele and Julia voted for Tai, suggesting they didn’t know of this plan.) Cydney did make some moves earlier, but the editing has placed her as basically a back-up vote to Aubry’s.

Aubry also got a near-hero edit even though she didn’t win the immunity challenge. She stayed in for more than 75 minutes, fingers holding up a wooden disk (though honestly, it seemed like she had more hand-to-disk contact than anyone else). When Jason started trash talking, she gave it right back. When he spit, she spit, and it was a wonderful moment, even though I was seeing it through eyes that I was jabbing with sticks to prevent me from having to see Jason spit yet again.

When Probst screamed “keep fighting, you’ve gotta dig!” I was basically screaming the same thing at my television, becoming one with my inner Probst.

Of course, Jason won, and declared, “from here on out, we’re unstoppable.” Thankfully, this is Survivor, and real people playing a game are wonderfully unpredictable. #Wow indeed.