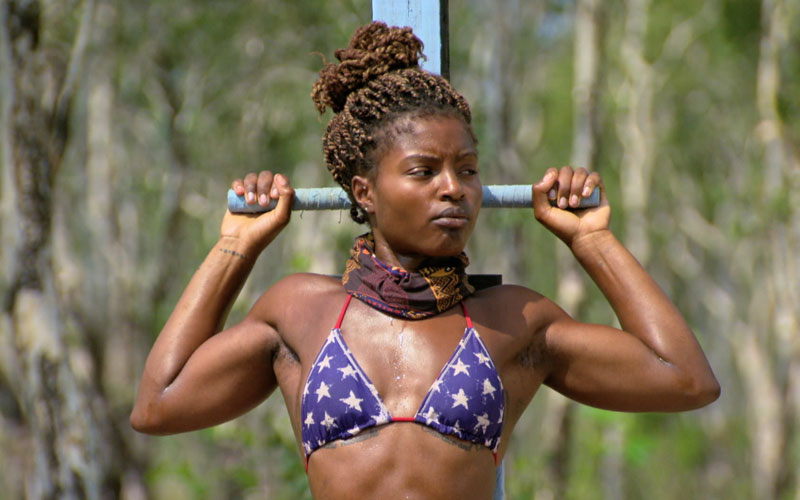 What was particularly great about the Survivor Kaoh Rong vote last night was, in no particular order, the following:

I don’t really care how much time this episode spent trying to humanize Scot and Jason, I am glad to rub sand in the infected wound that is their alliance. Their behavior—Jason’s in particular—has been repulsive, and it is my hope for this season that they are the next two to go, and that Tai’s vote for Jason signals his unwillingness to merge his idol with Jason’s.

At the start of the episode, Aubry talked about “the jocks and the pretty people” who “age and get overripe and then they’re overdone,” adding that “eventually the misfits get revenge.” That seemed like foreshadowing a turn in the game, but I was so worried it was just her impossibly high hopes.

Before we go on, I suppose I should mention that Jason, not talking with his mouth full for once, revealed that he has an autistic daughter and discussed the related challenges. Jason also told us that autism is “way more widely popular than people believe,” though I don’t think he meant “popular.” He said in a confessional that he didn’t want to “use my daughters to get ahead, but if someone asks me about my kids…” Someone asked, so he told the story, which he said proved, “I’m not just this deviant, dominant muscle, but I’m human, too.”

Certainly he is, and I don’t know anything about Jason’s humanity outside of the game. But inside it, what we’ve seen on television has been gross.

Meanwhile, Scot told us that his goal was “to take care of my whole family. … My brothers chose religion and family, and I chose the NBA.” He has also chosen, in this game, to align himself with someone who treats others like dirt, sometimes joining in, and that is not the best choice he could have made.

Aubry seemed especially in trouble after the reward challenge, for which she’d picked the team that lost, and also volunteered to be the person who tried to balance on tiny platforms held up in the water.

(Tangent: The actual reward itself was disappointing, only because the producers did not have Neal return to camp to serve ice cream with “all the fixins” to the winners. Yes, the episode after the ice cream guy was eliminated, the reward was ice cream.)

So yes, after the reward challenge, Aubry was in tears and seemed resigned to her impending exit. So did everyone, really.

The immunity challenge was endurance with a temptation. (Another tangent: if you like endurance challenges, there is an upcoming show structured around them you may enjoy, Fox’s American Grit. More on it next week.)

The challenge did exactly what Survivor challenges do at their best: it revealed something—or at least, highlighted—about a contestant that affected the game.

At least, that’s what the editing suggested, as Cydney watched her three most arrogant alliance members jump down and gorge themselves instead of trying to secure immunity—or even care about challenge themselves, as Tai did. She also watched from her hammock as Nick pulled Julia aside to check up on Cydney. “How stupid can you be?” Cydney told us of Nick’s not-so-subtle behavior.

And when she called Jason, Scot, and Nick out on it, they looked like kids who’d been caught comparing pee-pees.

Cydney didn’t win immunity; Tai did. But again, immunity didn’t really seem to matter, other than being a battle between willpowers.

When Cydney approached Aubry and Debbie, and they agreed to vote for Nick, I had two successive thoughts: 1) Excellent, and 2) DEBBIE PLEASE DON’T SAY ANYTHING PLEASE PLEASE PLEASE.

Debbie did end up saying something at Tribal Council, after Tai revealed the twist of the super idol, surprising Julia. Debbie pleaded that there was “still time to do it tonight,” i.e. vote against the alliance. But I’m also not quite sure anything changed at Tribal—it didn’t seem like that moment landed as hard as the editing would have liked us to believe.

However it went down, hurray! This makes the game so much more exciting than the major post-merge alliance just picking off the smaller group. Let’s hope that picking off continues—and is it too much to hope that it continues with Jason and Scot?