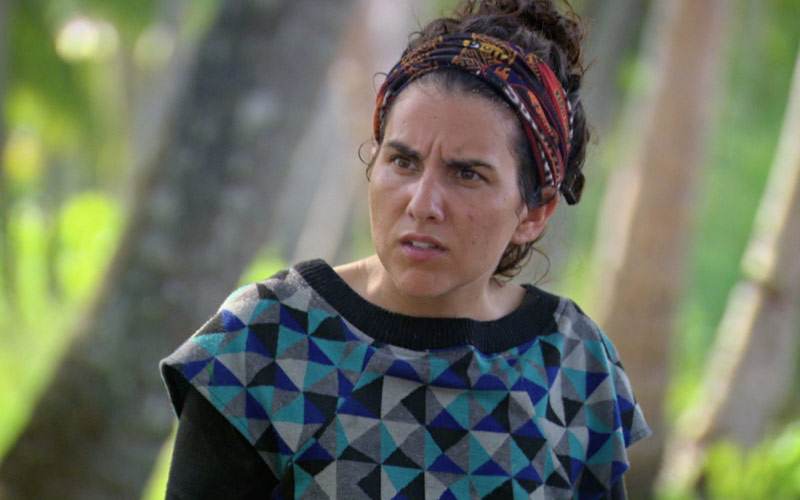 Sometime after he poured the tribe’s drinking water all over the fire to allegedly sabotage them, Scot Pollard said, “Let’s think of some other fun stuff to do.” I had an idea: How about you and Jason sink the machete and ax into your feet and go home? Maybe even skip being part of the Survivor Kaoh Rong jury?

But no, that was just an emotional, irrational response, like the kind Scot and Jason had, creating a man-baby tornado that also pulled Tai in. Let’s face it: as lovely as he is, Tai is a terrible player, confessing the presence of the super idol last week, and inexplicably aligning with two people whose behavior he recognizes is reprehensible and repulsive. Worse, he’s now starting to behave like them, dousing the fire in the middle of the night.

Whatever game the three of them are playing, it makes literally no sense. Sure, they can play the super idol, choose who goes home, but after that they’re just screwed. The Big Brother saboteur made more sense than their sabotage. As Michele said so perfectly, “We’ll find ways to eat without the machete and the ax. Fuck you.”

Who’s going to vote for one of them to win? Who would keep them around? What good does making everyone else miserable actually do?

Well, having two villains—grown men who have regressed so much they’re a few episodes a way from reattaching their placentas—contributes to an entertaining hour of television, that’s for sure. Though, honestly, it wasn’t their villainous behavior that was entertaining, but that there are now villains to actively root against.

From Nick’s blindside to Debbie’s blindside was quite the unexpected path, but I’m not quite sure how much it had to do with Jason and Scot’s sabotage.

Julia sensed an opening with them because they were obviously outnumbered; Debbie failed to see the liability that Julia had become and thus was sent home. (I very much appreciated Debbie’s exit confessional, when she said, “It totally stinks that those three wankers have made it farther than me, but they played a better game.”)

While I wasn’t quite on board with Aubry’s Julia-must-go logic—why not dump the more aggressively hostile Scot or Jason and then get rid of untrustworthy Julia later?—her sense of Julia’s duplicity was spot-on, and her turn against Debbie, who’d become a liability, was well-executed.

That turn began at the reward challenge, when Jeff Probst let the tribes decide for themselves how to break into teams, and Julia decided to join the three men. They did need a fourth, after all, and I wonder if Aubry’s suspicions were really raised because of that. Her move was so obvious and public, and again, the challenge couldn’t have proceeded without someone joining their team.

The reward challenge was tense for sure, with Debbie making good progress to try to catch up with Jason and keep him from a reward challenge if only to stop him from getting more food and talking with his mouth full because that’s what he always does ugh.

But that immunity challenge! Just wow. When it seemed like it was ending—nope, it continued. People fell out and then came back; others almost had the win and lost it by a domino or two.

Brilliant, brilliant design—simple but not easy at all—and also some terrific cinematography, especially the tracking shot of Julia’s blocks falling for the win. Watch:

Tribal Council was equally chaotic, with everyone devolving into full-on whispering at one point, which does make more sense than trying to communicate voting plans to allies with vague clues.

Before the vote, Jason, Scott, and Tai all showed their idols, with Jason and Scott declaring that they’d play rock-paper-scissors to find out who got to play with the one Jason pulled out of his pants. Obviously, their random game was just for show, because what they really did was to give it to Tai, so he could create the super idol and save one of them if necessary.

It wasn’t, and the best part of all this is now Tai has a super idol and he doesn’t have to give it back. The rules of the idols say they cannot be stolen.

Despite his turn toward the dark side tonight, he may still have some light inside—persuadable light. The preview gave that glimmer of hope that maybe next week, Scot and Jason’s games will become fajitas in a Mexican restaurant being dumped into a trash can.