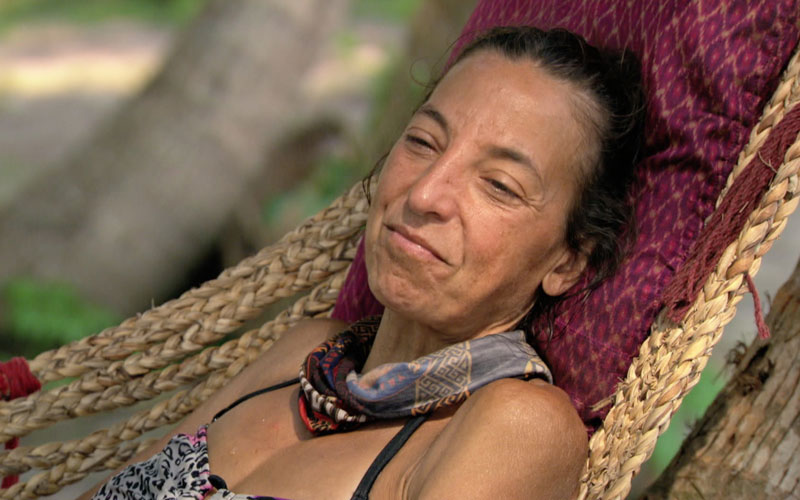 In her exit interviews, Debbie Wanner offered two great reminders about Survivor for fans and casuals alike: First, the game “is far tougher than anyobody out there thinks that it is, because it is so multi-tiered,” she says, going on to detail the physical and emotional demands that it’s easy to ignore while we’re all playing Wednesday evening quarterback.

Second, as she says in another interview, the version we see is the “heavy duty edit.” That’s a nicer way of saying that the editing often oversimplifies and dumbs-down what actually happened in order to craft a story. That’s necessary, of course, especially for time, because the editing must compress three days of activity into fewer than 45 minutes. But it can also be used to construct the narrative producers want.

The unfortunate part of last night’s episode—besides, you know, the massive sore-loser temper tantrums thrown by two allegedly grown men—was that the edit left out some things that would have fit and really would have created a more well-rounded episode.

Debbie knew she was being targeted

Not every #blindside is an actual blindside, and last night’s Tribal Council result was no exception.

How did Debbie know? Joe told her (of course he did). Why not show this? It’s still just as interesting.

Debbie even considered flipping to join the men and save herself, but told Parade’s Josh Wigler that she was basically done: “I think my brain and my body just had enough at that point.” What about her reaction? “Those faces you saw me making were a little bit out of context and in response to some other things going on. It was well played, but no, I was not blindsided,” she said.

During Tribal, Debbie told Gordon Holmes that she whispered to Joe, “Hey, it’s been great. See you later.”

Update: A year ago, immediately after she was actually voted out, Debbie said exactly the opposite: “You know, I was blindisded, and the biggest shock is Aubry and I had a bond that I just didn’t think was going to give.” She says that at the very start of her Ponderosa episode, and then tells the doctor, “I was blinsided but it’s all good.” So this may just be revisionist history. (Thanks to Purple Rock Andy for pointing this out.)

“We didn’t assume, we knew. We knew Tai had an idol, we knew Scot did not, and we knew Jason did. And part of that was overhearing them talk. You’re always in close proximity. I had actually been privy to a conversation between Tai and Jason where they said, ‘Why would we give up our idols for a millionaire?’ And why would you? I couldn’t convince Aubry that she was safe and if she took me or one of the other girls out, she would be safe.”

Julia may actually have been trustworthy

Later, she says the women’s original plan was actually to split the vote between Jason, Scot, and Tai, and so Julia gave the guys only part of the story: “When Julia went back, she didn’t tell them we were voting two-two-two. She told them we were going to target Tai and Jason, trying to flush out an idol, which would have made sense. Off-screen, I saw the interactions, and I just knew that Julia would stay loyal to the girls. She did, by voting me out. She proved me right,” Debbie said.

Debbie retailated against Scot and Jason

By stealing their shorts, literally. She buried them under a log in the middle of camp, but as she told Josh Wigler, at Tribal Council, “Scot was wearing Nick’s shorts. That’s because I stole Scot and Jason’s shorts in retaliation for them stealing the hatchet. People have to notice this: Scot is wearing another man’s dirty shorts. How hysterical is that?”

As Debbie said to Gordon Holmes, ” I just don’t know why when people are being bullied they take it up the butt with no K-Y.”

Not just the K-Y comment, but what she told Gordon Holmes about the super idol:

“Which I do not like the concept for at all. I think that is the only season that stupid stunt should ever come up. It’s just crap. … You’re dead and you’re resurrected? I didn’t like it at all.”

Survivor has become self-referential enough that I wish we saw more criticism of production’s choices within the game. Players celebrate Survivor and complain about it, so why not show both?

Debbie is on the short list of possible returnees for season 34, and in her exit interview, Debbie says, “The second-time around, I would be even bolder.”