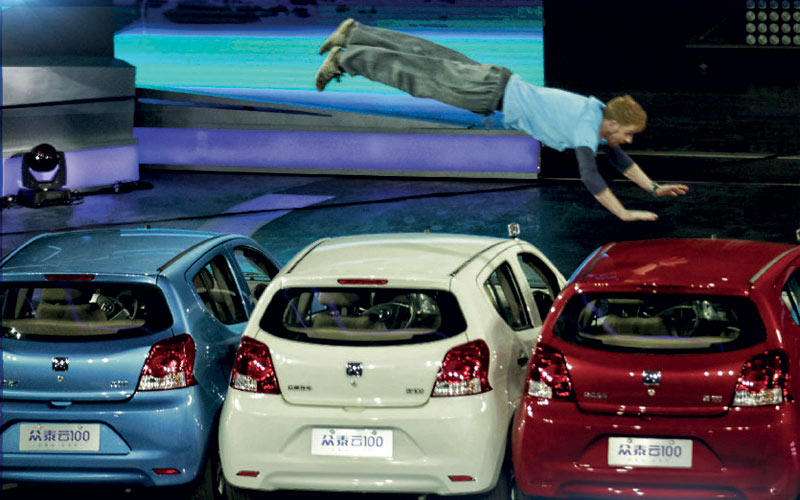 A hit Chinese show is being developed for the United States: Super Combat Teams, a real-time, studio-based series that has contestants—from Olympians to ordinary people—compete in extreme stunts.

While there are “no judges” and “no mentors,” there are team captain who “guess the results of five challenges,” according to one of the trailer. Even better, viewers guess, too, via an app, and can win cash prizes. Deadline reports that “In China, the average number of audience members participating reached [15 million] per episode.”

This seems tailor-made for a broadcast network, from the studio-based format to the live contest element to the potential for celebrity competitors. And this trailer, which doesn’t include any clips from the show itself (watch those below), is quite effective at establishing Super Combat Teams as a big, epic series, even if some of this footage doesn’t make any sense:

Small World IFT’s sales pitch says it was “China’s #1 rating entertainment programme, originally produced for Jiangsu Satellite Channel with a total viewing figure of 96 million people,” and describes the show like this:

“In Super Combat Teams, competitors, comprising a diverse range of world champions and record holders, compete in the most thrilling challenges and stunts to prove themselves to be the best.

Each episode presents five spectacular challenges such as ‘Fly Over Cars’, ‘Cross Fires’ and ‘Beat Gravity’. Super Combat Teams is the first stunt battle format to invite its audience to be part of the show—with viewers at home guessing the result of each challenge in real time via an interactive platform, with cash prizes up for grabs to those that predict the correct winners.

Not just another talent show, Super Combat Teams has a big heart and many emotional layers amidst these battles. Competitors may be long-time rivals, or a young hot amateur battling his or her idol for the first time. Watch as the celebrity captains question each challenger as to their feelings and nerves about their upcoming epic battle – and these celebrity captains are winning prizes not only for the studio audience, but also the viewers at home, who must watch it live using the simple app, to win – DVR-proof!

No judges. No mentors. These challenges are real and emotions will run high.”

Here’s another trailer, with footage of the actual stunts: