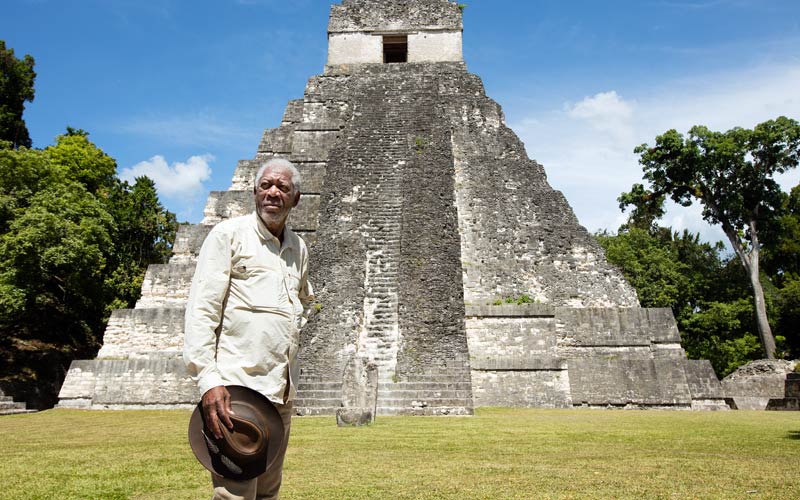 “Is there some universal concept of God that all religions share? Or, is God fundamentally different to people of different faiths?”

Those are the easy questions Morgan Freeman asks at the start of The Story of God‘s third episode this Sunday.

The six-part series (National Geographic Channel, Sundays at 9) looks at six aspects of the divine: life after death, creation, armogeddon, evil, miracles, and this Sunday’s episode, which asks, “Who is God?”

On the show, Morgan Freeman travels around the world, to seven countries and 20 cities, talking to people and to the camera, exploring different traditions and perspectives—and the origins and history of beliefs—without judgement.

He gets on his private plane and ends up in places such as the interior of an Egyptian pyramid, where an expert talks him through the meaning of the hieroglyphics, and where he looks into an empty sarcophagus and says, “Well, I’m sorry he’s not here, I’d like to shake his hand, say, Hello, how you been, what’s going on?”

For moments like that, and for the information it packs into each hour along with great cinematography, the show is worth watching.

There’s no doubt that Morgan Freeman’s on-screen presence helped draw 3.5 million viewers to the show’s debut, which became NatGeo’s “fourth most-watched telecast of all time,” according to the network.

Produced by Freeman’s production company, Revelations Entertainment, which also produced Science’s Through the Wormhole. At TCA in January, Freeman was asked what led him to these kinds of exploratory nonfiction series.

“I don’t remember. I don’t know how,” he said, and then referenced Revelations CEO Lori McCreary and Story of God executive producer James Younger: “except that my relationship with these two was the main catalyst for all of it. We were able to exchange ideas philosophically, philosophical ideas, and I think over the years they’ve sort of crystalized into work.”

He was also asked about his film roles, and said, definitively, that those roles and this series are unrelated: “playing God in the movies is just strictly a matter of learning a script.”