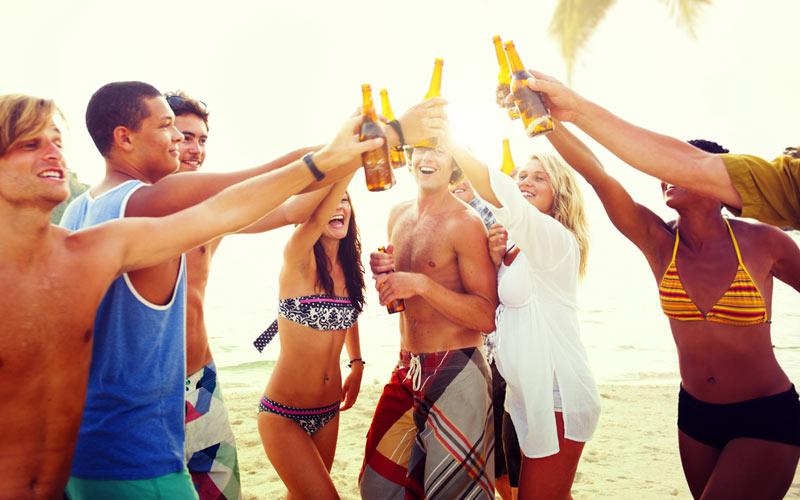 These beer-drinking, smiling people are probably not the hedonists the producers of Beach House are searching for. (Photo by Shutterstock)

Party Down South airs its final episode Thursday night, cancelled despite being CMT’s highest-rated show. Jersey Shore has, of course, been off the air for more than three years now.

But the spirit of both shows will live on in a new series from producer SallyAnn Salsano‘s 495 Productions that’s currently casting: Beach House. (That may explain why she told me only “we’ll see” when I asked if Party Down South would move to another network.)

There’s no need to worry that the format will shift suddenly, becoming a haven of introspective conversation or thoughtful interaction. That’s because Doron Ofir Casting’s announcement explicitly says it is looking for “smoking hot” “true hedonists.”

“We’re looking for a handful of true hedonists to be the exclusive guests at the next great house based television series. We are searching Florida statewide for the spiciest, hottest, wildest, sexiest, ripped bodies and beautiful faces to live together, love together and prove you’re from the hottest state on earth, brazen and bare for the world to envy.

We are casting Floridians because they embody diversity and an international spirit of abandonment, which draws revelers to its shores for the freedom, music, clubs and the best beaches on earth making it a world party destination. Your life is a unique story waiting to be told, it’s explosive, exotic, sexy, undeniable, and we want to hear all about it. If you’re old enough to know better and young enough to not care.

If you appear to be in your mid-twenties to mid-thirties confident, smoking hot and ready to be the next television legends then apply now!”

The application asks those sexy anti-ascetics to list three friends who they’d like to “bring along for the ride,” suggesting the show might not just assemble random strangers to get drunk and hook up with each other.