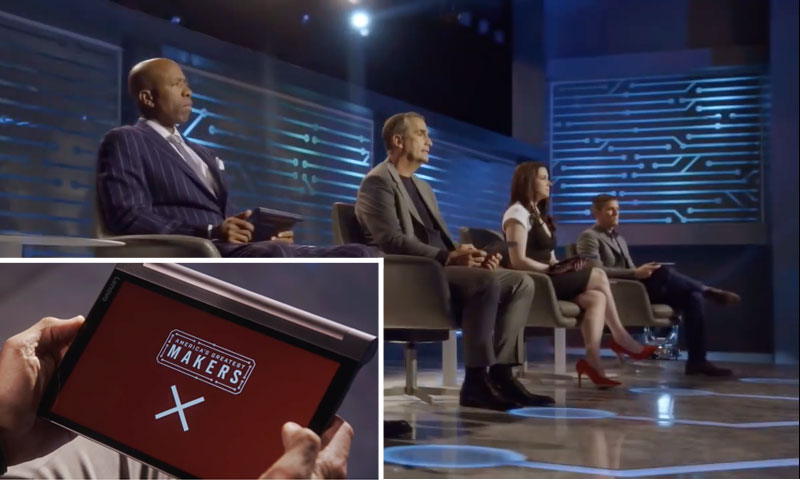 The judges on the new TBS reality competition America's Greatest Makers, and (inset) the high-tech gizmo from the future they use to vote with.

A segment or two into TBS’ new Mark Burnett-produced reality competition America’s Greatest Makers, I started to wonder. Then I realized that maybe, just maybe, I was supposed to find all this funny. After all, the network’s brand used to be “Very Funny,” and their web site’s title still says “Watch Funny TV Shows and Movies on tbs.”

The TV show isn’t funny, but out of the gate it’s definitely clunky.

The first episode pretty much was Shark Tank, if Shark Tank took place on a set discarded from Epcot in the late 1980s and featured no drama or excitement.

The set is actually formed of massive faux circuit board panels, because Intel is the sponsor. In case you missed that, the logo actually says the show is “An Intel Experience,” and the contestants repeatedly mention the Intel widget they’re required to use.

Those contestants are introduced with an awkward, scripted package, and then do their awkward pitch. There are some vaguely interesting inventions, but if these are “America’s Greatest Makers”—well, uh, yeah.

Instead of bidding their own money or show any kind of interest or investment, the judges just vote—on tablets, how techy!—and then, after some 1980s future noises (I wish I was kidding), the set lights up to let the inventors know the decision. Green means they move on; red means they cry.

All of this is about on-par with the low production values of Food Network’s Shark Tank knock-off Food Fortunes.

The ray of hope is that this show does have somewhere new to go: these aren’t one-off episodes, but the audition episodes for a longer competition. After the first two episodes, each of the next five episodes will be a competition between three of the teams that moved on. One team wins $100,000 and goes to the finale; the others, presumably, will be sent home by Max Headroom.

Yes, this is just episode one, and most shows take a while to find their footing—Shark Tank arguably took at least into season two for the sharks to develop the chemistry we now take for granted. But America’s Greatest Makers doesn’t feel like it’s earned the label of “greatest” anything.