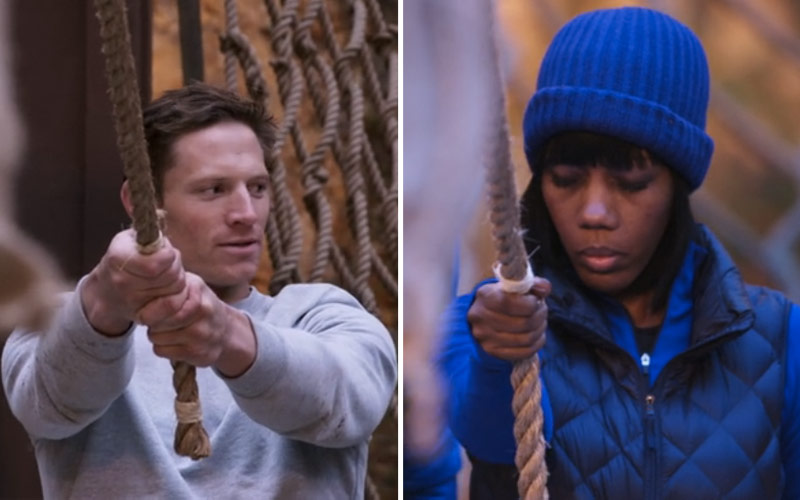 The conclusion to Thursday’s premiere of American Grit was one of the most satisfying challenge outcomes imaginable. I encourage you to watch it—here’s the full episode—before reading the following discussion, which reveals the outcome.

While Chris does a lot of the work himself, American Grit builds a wonderful first hour that not only establishes the world and this new competition, but also does an excellent job of setting up his epic fall.

Chris doesn’t dominate the episode, but there’s just enough of his grossness that it builds up and by the end, we’re ready for him to fail. There are his ugly clashes with other contestants, such as when he tells Maria, “You’re so distasteful. You’re the worst person.” (Of course, he was really just projecting.)

The real conflict comes as a result of his team leader’s coaching during the challenge. Tasked with getting the entire team and a log from platform to platform, Tawanda “Tee” Hanible suggests they do it without the aid of a rope and instead just hold the log so people can crawl across. Though her suggestion is truly questionable, the way Chris deals with her in the moment and later is rude and dripping with condescension.

“I’m not blaming you, I’m saying I blame myself for listening to you,” he says later, demonstrating his proficiency at disingenuousness.

Tee ends up sending Chris to the circus, and John Cena’s uses his pre-circus conversation with Chris to deliver a delightful take-down:

“There is no way for me to possibly question your athletic ability. For me, your character may be in question. Your mentor is a gunnery sergeant in the United States Marine Corps. When you turned 10 years old, she was in boot camp, kicking ass, with men. When you were getting your driver’s license, she was in Iraq, in combat, and she was responsible not only for her own life but the safety of more than a thousand Marines. In 2008, while you were discovering yourself, your mentor was being award by the United States Marine Core and the White House. You sleep under a blanket of freedom that she has provided for you.”

The only thing missing from that is a concluding body-slam.

Chris breezes through the circus obstacle course, meaning he has all kinds of time to relax and rejuvenate before the final test of endurance: holding up a sandbag. He seems like the kind of villain who will prevail in a competition that does not involve the opportunity for his teammates to vote him out.

Meanwhile, Goldie, a roller derby star who’s much smaller in stature, comes in last having made it through the obstacles slowly but assuredly. She has no time to rest, and has to immediately start the endurance challenge.

As the three competitors hold their sand bags, Chris decides to show off. He yawns repeatedly, pretending he’s bored. He pulls the bag up and down with one hand, as if he’s lifting weights, to show that this is nothing to him. Rain comes down.

At one point, he says, “That’s the cologne I put on every morning: confidence,” and John Cena cements his hosting wit by saying, “that’s a strong smell from up here.”

His coach, Tee, sticks with him despite all of this and despite his disrespect, and continues to try to motivate him. “Focus on you,” she begs him. He doesn’t. (This is one of American Grit‘s more interesting twists on the familiar: the mentors are right next to their team members, whispering in their ears and giving them support and guidance.)

After 40 minutes, everyone must hold the rope with just one hand, and Chris, who’s already been holding with one hand, brags that he’ll use a hand has been resting. As more time elapses, John Cena observes that it looks like Goldie is slipping, and for a moment it seems the underdog hero will lose to the villain.

But no! The rope starts slipping out of Chris’ hand, and eventually his sandbag falls. (The only thing missing here is something for that bag to smash, like a ceramic version of Chris’ ego.) Goldie collapses into her coach’s arms in joy and exhaustion.

What works so well about this episode is the result of the competition’s structure: neither John Cena nor Tee are responsible for taking Chris out, nor are Maria or any of his competitors or teammates. It’s his own cockiness and hubris that are 100 percent responsible for his downfall.

But even the downfall isn’t the truly great part—it’s Goldie’s success. Rorke Denver, says, first to her and then to the camera,

“It is special beyond belief. You showed my daughters and you just showed your kids  what it’s all about.”

“I’ve led some of the highest-level performing teams on earth, and Goldie’s perfromance will rank right up there in my memory for the rest of my life.”

He chokes up at the end, and so did I. The emotional moment is broken with some comic relief, as Chris says, “I gave my best possible effort.”

That is also something American Grit can say for its first episode.