Hoarders ended its eighth season last night and is once again on the bubble, its renewal in question. After A&E cancelled it, Lifetime brought it back, and then A&E took it back from Lifetime this season. If this should be the end, though, it concluded with an excellent summation of just what this show accomplishes.

One of the two stories followed a grandmother whose grandson lives with her because his mother uses drugs and they became homeless. The only space for him in his grandmother’s hoarded home, though, was the couch. It was devastating, as are so many of Hoarders’ stories.

At the end of the episode, after the kid, Maddox, saw his clean, new room—cleaned and newly furnished by the show—he broke down in tears. Therapist Dr. Robin Zasio told the camera, “He’s free from the fear of child protective services coming in.”

Well, hold on a second. As with many of Dr. Zasio’s overly-dramatic pronouncements, there’s some truth there inside a sensational sentence.

What Hoarders really does

Enter Matt Paxton, who was doing the clean-up on that house. He sounds like kind of a bummer compared to Dr. Zasio, talking about the “enormous amount of work to do” that each of the family members have ahead of them. 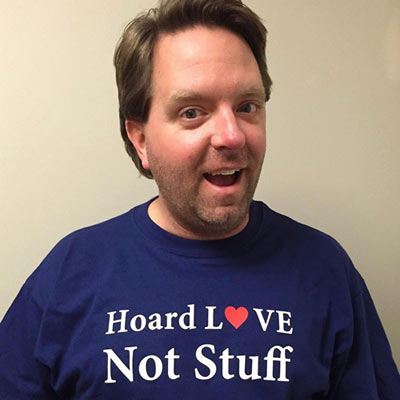 Hoarders and ServiceMaster’s Matt Paxton. Sales of this shirt benefitted The Hoarding Project.

And then, in 14 words, he summarized the episode, its effects, and the show perfectly:

“Did we change this kid’s life? No. But at least they have a chance.”

On a macro level, what Hoarders has done is bring attention to mental illness that affects a lot of people (2 to 5 percent of Americans!), not just the people afflicted with it.

The updates that appear on screen over the credits often have sad news to report, as the show’s subject squandered that chance: refusing aftercare funds, re-hoarding their house, et cetera.

Thankfully, this episode had a (mostly) happy ending, as we learned Maddox and Vivian are both in therapy—though it also said that his mother was “offered addiction counseling,” as in, has not yet accepted the show’s offer. Hoarders can do good for people, but it cannot do everything.