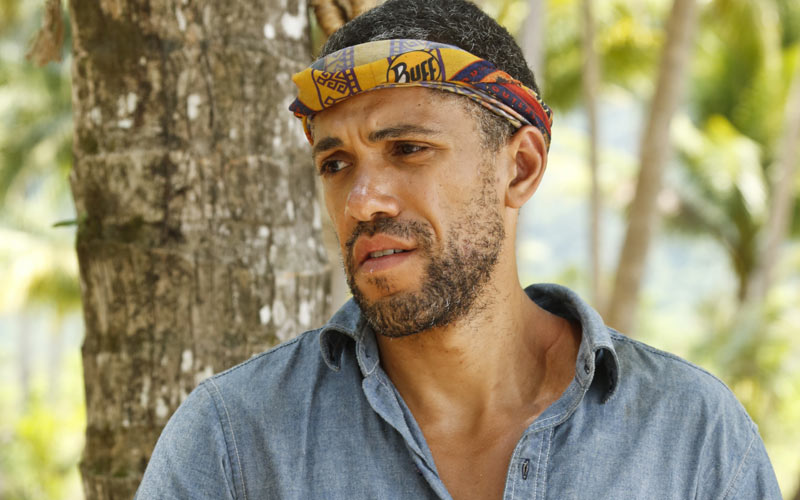 In Peter’s exit confessional from Survivor Kaoh Rong, he said, “If this is over stacking boxes…” He was referring to the immunity challenge, which concluded with the tribes creating a vertical stack of small and larger boxes. His strategy start from the bottom and then to lift huge stacks and insert more in the middle. So much easier that way, especially when they tumble down and cut open a tribemate’s head.

This was an oddly good metaphor for his game: unstable, unclear, unwise. Adding to the metaphor was his response to his tribe’s loss: Peter threw down the block he was holding, and then pushed over the stack of blocks. Impulsive, pointlessly aggressive.

All of this illustrated his game, during which he seemed to remain unaware, in the same way he thought being voted out of the game was about his bad challenge decision alone. But yeah, Peter’s classic play-too-hard, play-cluelessly kind of was about stacking boxes.

His exit and Tribal Council was the highlight of a pretty standard, middle-road episode of Survivor, with some perfect little details (Debbie’s on-screen occupation changing to “part-time model” after she said she’s done modeling on and off) and two solid challenges. Though, let’s be honest, as exciting as it was to watch Nick almost beat Scot, a free-throw challenge on a season with an NBA player is some story-creating bullshit. Win or lose, it’s a built-in Look what the NBA player did! narrative.

Freaking out at Tribal Council

When tribes come to Tribal Council and start flailing, it is far more interesting for viewers than if they’re rock-solid going in and just execute their plan. That kind of solidarity means the editors usually do some dancing around to try to deflect our attention and make the outcome a surprise rather than obvious.

It can also reflect some deft thinking and quick responses to some new information at Tribal Council, which we saw several times last season.

Going into Tribal, Aubry’s decision was clear: staying with her original alleged brains Joe and Peter and voting out Julia meant Scot and Tai couldn’t gain the upper hand with new floater Julia. But since Aubry is smart and one of us, she knew Peter had to go.

Tangent: Joe’s interrogation of Peter was so, so great. You couldn’t have scripted more obvious deflection than what Peter delivered instead of actually answering Joe’s question. I think the I’m an FBI guy thing gets tired, but Joe delivered.

While I love that outcome, I also appreciated that Julia got to stay. Voting out Julia, who joined their tribe at the start of the reward challenge, was, as Tai said, “the most obvious thing,” so she seemed screwed by last episode’s pointless twist. At Tribal, Probst twisted the knife by pointing out how she’s unable to trust everyone and the obvious person to be voted out.

As much as I loved Aubry changing her vote and leaving that question hanging, was it smart to just cross out Julia? Could she have just used a new voting card? If not, why not scribble out Julia’s name? Is there a reason to communicate to the tribe that she—or someone—changed her mind? How will that affect her game moving forward?

Next week: a merge and a visit from Probst

Now that the merge is ahead, though, both those things—Julia’s external position, Aubry’s decision—may be erased by new dynamics, i.e. the emergence of the next Peter, the person whose game play knocks all of their blocks down.

Will it be someone like Nick, who took it upon himself to operate Michelle like a puppet because she’s a silly young girl? As obnoxious as that was, and as much as I’d rather Michelle just tell him to go f himself Michelle’s dismissive responses in the confessional were perfect: “Bro, I know.” “I don’t need to be carried, bro.”

The longer trailer for next week’s episode, below, shows two interesting things: 1) original tribe loyalties seem to be in play, with brains as the floaters, and 2) Probst visits the merged tribe’s camp and says, “Once again, the game has changed.”

As Peter proved, though, it really hasn’t: the same basic mistakes will get a player every time.