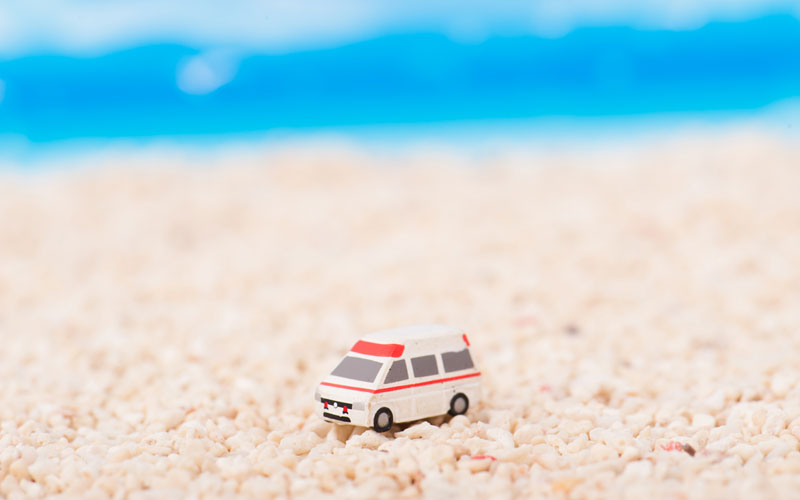 Survivor has had many medical evacuations throughout its history. (Photo illustration by Shutterstock)

On tonight’s Survivor Kaoh Rong: Brains vs. Brawn. vs. Beauty, CBS says, “The brutal heat of Kaoh Rong takes a toll on several castaways, and one is medically evacuated from of the game.” Jeff Probst promised, in EW, that this is “The most dramatic and maybe most compelling episode we’ve ever done,” presumably because of the medevac.

Survivor is no stranger to medical evacuations, nor to dramatic and compelling episodes. But this particular medical emergency was the centerpiece of the teaser released in December during the fall season’s finale, with Probst calling for the helicopter and quick close-ups of someone (Caleb?) getting IV. This season’s evacuations were even mentioned last June by Survivor creator Mark Burnett.

Here are some highlights from similar low points in Survivor history (the Survivor Wiki has a list of previous medical evacuations over the past 16 years), which are a reminder of how brutally real the conditions can be. After all, a French Survivor contestant died during a challenge that was filmed in the same place as this season.

At the end, learn about the team responsible for providing on-location medical support.

An off-screen evacuation this season

Tonight’s medical evacuation is not the first this season. After being voted out last week, Liz Markham had a staph infection that required surgery. She said in an interview, “A few days after I was voted out, they sent me to the hospital [where] they had all the infected staph tissue cut out of my shoulder, my back, my armpit, my knee. I had these big gaping holes, like four inches down to the muscle.” She had to have plastic surgery in the US, she said in another interview.

Two in one season

The first time two people exited involuntarily was during Survivor Fans vs Favorites. First it was Jonathan Penner, because of an injury sustained during a challenge (for which he was hospitalized for three weeks), and later James Clement, because of an infected finger.

Russell Swan’s scary collapse during a Survivor Samoa challenge took him out of the game, but what’s most fascinating to me is how his memory of those terrifying moments did not match the reality. I interviewed him after that episode aired, and he told me he was “absolutely pissed off” about being pulled, and was a jerk at that point: ‘Get that camera out of my face.’ I was a jerk to the medical staff, because for me, my memory was, I was down for five minutes.” Read about what happened, and what he experienced.

Perhaps the single strongest image of a Survivor exiting the game so far came in season two, after Michael Skupin fell into the fire—which wasn’t captured on camera. He ran to the water, screaming. When he lifted his burned hands up, skin was just falling off. Alas, what Skupin may now be best remembered for is not that nor his return to the game later, but for this currently unfolding horror.

A tribe (temporarily) talks a contestant out of leaving

During Survivor Caramoan, Shamar was removed from the game due to an eye infection because his eye was scratched and medical personnel thought he could lose his sight. What’s remarkable is that Probst previously visited Shamar’s tribe’s camp, when he was going to quit the game, but the tribe talked him out of leaving. Probst was skeptical as a result of that previous visit, but didn’t accuse Shamar of faking that injury. But later:

Probst accuses a player of faking a medical emergency

Colton Cumbie was medically evacuated from the game during his first Survivor season, and his second time on the show, Survivor Blood vs. Water, ended with him quitting the game. But first, Jeff Probst berated him and accused him of faking appendicitis.

A profile of the Survivor medical team

There’s a team of doctors and nurses on location and on-call at all times. In 2014, to promote Survivor San Juan Del Sur: Blood vs. Water, CBS produced/ET aired this look at the medical team, which then included three doctors (Dr. Ben Canalese and Dr. Ana Phillis, who are interviewed) plus three paramedics and two nurses.

They’re responsible for both the crew (which can be more than 350 people) and the cast. The show has used a company called Immediate Assistants in the past to provide those services. Throughout the show’s history, the medical personnel has changed; a doctor who worked on the show earlier in its life was fired after admitting cocaine use and more.

In the video, Probst says the doctors have more authority than the producers and can pull someone from the game. In addition, The medics see the cast at the challenges, and will treat minor injuries, which is why bandages sometimes appear on contestants without any explanation. They also get to provide explanations to Probst and the contestants about what’s happening, usually while the patient lays there in pain. Watch: