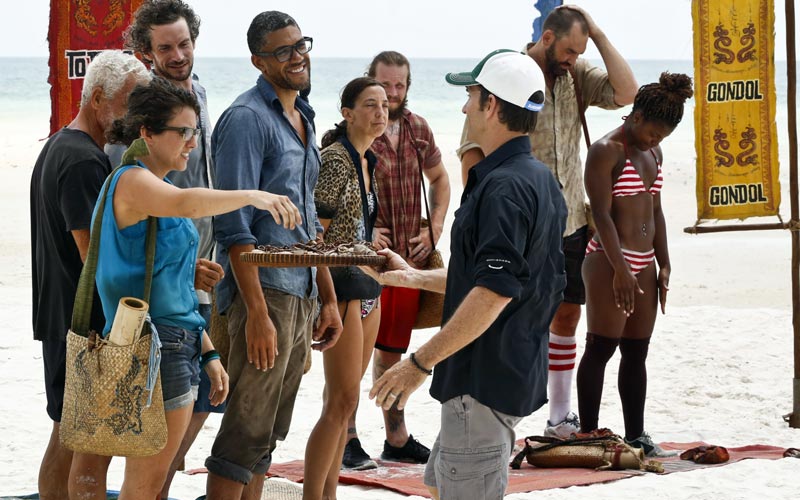 Near the start of Survivor Kaoh Rong‘s fifth episode, the tribes arrived at the challenge beach only to learn that the production’s decision to run a challenge last week that nearly killed a player had additional ramifications.

“Caleb’ unfortunate evacuation,” Jeff Probst explained, “left you with an uneven number at 13.” Production’s plan had been to split the 14 contestants into two tribes of seven, but now there was one less.

What to do? I mean, besides the obvious and just make one of those tribes of 7 and one of 6, and have one person on the seven-person tribe sit out of the challenge? Oh yes, they decided to wreak havoc on one person’s game.

This is a good example of how Survivor has to adapt—and how the production’s choices can screw someone over. With two-tribe challenges prepped for the rest of the pre-merge season, perhaps, it wouldn’t possible to keep three tribes in play. But they also made the choice to single one person out and give one person an obstacle no one else would have.

Probst inserted a red buff into the mix, and the person who randomly chose it—Julia—had to go back to the Brawn beach alone, excluded from the new tribe strategizing, only to be added next week to this episode’s losing tribe. It was a raw deal, never mind that she, too, was suffering from dehydration all alone in the shelter. (She described it as “a combination of dehydration, being out here alone, and paranoia,” but the show kind of blew past that—like, did she need medical attention? Did the crew help her? Did Probst take away her Texas flag in exchange for a sip of water?)

Julia—who I don’t think I’ve ever seen at all this season—knew what going to Exile Island meant for her: “I’m going to come in the odd one out.” Actually, at least on Exile Island, people were just leaving their tribe and coming back. She’s not even in a tribe for three critical days.

Tribe swaps themselves are to be expected, of course, and are a perfectly fair part of the game. However, the non-brawn tribes seemed particularly surprised, perhaps because they’re so unused to going to Tribal Council.

The most interesting thing this episode was Tai’s choice: He could play his idol, either to protect himself as an at-risk member of the former Beauty tribe, or to screw up everyone’s plans to vote out poker player Anna, and blindside Peter.

He presented this plan to Scot—who’s subbing in for Caleb as Tai’s beach bromance, telling the camera, “I’ve got a man crush on Tai already”—and Anna, confessing that he had an idol.

Perhaps because he is free of the tractor beam of Jason’s rotten behavior, Scot seemed like a new player entirely, and thought long-term when Tai was thinking short term. That said, he doesn’t seem to be severing his deal with Jason, because he realizes the potential of being aligned with the two people who have idols—which, when put together, can make him all powerful, mwah ha ha.

Speaking of Jason: Debbie created an alliance with Neal, Cydney, and then approached him, and she said a word I never want to hear in relation to Jason ever again: “Now I need to speak to Jason, and make it a foursome.”

Excuse me for a moment:

This was one of those episodes where the decision seemed easy, but the editing worked hard to create doubt in our minds before Tribal Council.

Ultimately, Tai trusted Scot and didn’t play his idol, and Anna went home unanimously. Peter is still there to constantly stick his stethoscope in his mouth at Trial Council, which is what he seems to be best at.

Before she left, Anna said one of those fateful Survivor foreshadowing lines: “I love Survivor, I love blindsides, and I love immunity idos, especially hidden ones.” Since she was expecting to be saved, after she was voted out, she told the confessional camera, “This hurts so much.” Sometimes in Survivor, you’re dealt a crappy hand.

And if you’re Julia, who will join the tribe that just voted out one of its two Beauty members because they were the minority, you’ve learned that sometimes the Survivor house can fold your hand for you.