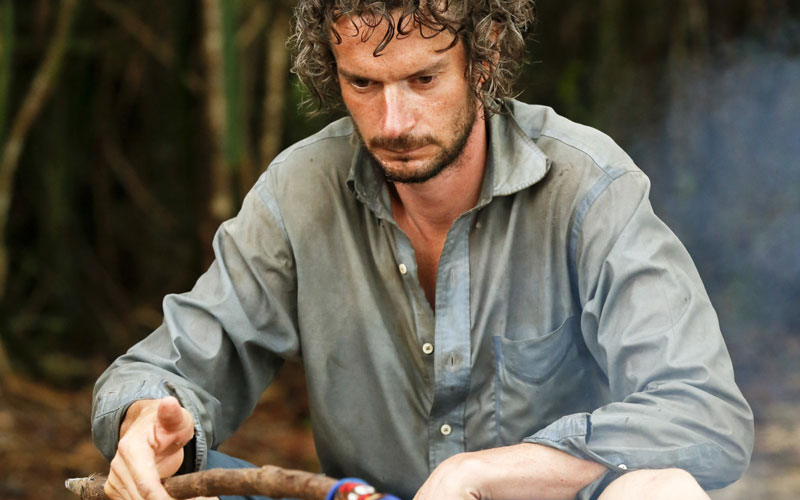 Neal Gottlieb makes the same face that I had while watching episode seven of Survivor Kaoh Rong: Brains vs. Brawn vs. Beauty. (Photo by Robert Voets /CBS Entertainment)

Halfway through the Survivor Kaoh Rong merge episode, its official narrator, Aubry, told the camera, “The game is on, let’s go.”

That’s kind of how I felt by that point—enough talking, starting doing! There was no reward challenge, just a merge feast, exchanging Jeff Probst shouting for Jason spraying food from his mouth, which actually is the most attractive thing Jason has done all season.

And ultimately, nothing happened, just talk, at least until the frustrating conclusion to this episode.

There was an immunity challenge, though ball-balancing wasn’t that dramatic or interesting, and it didn’t feel like there were any stakes going into it. The most notable part for me was that Probst made ball jokes jump the shark by saying, “Tai’s bals banging into each other, never good.” Skipping the double-entendre any more and just talking about testicles = the ball jokes are done. As a person with a child-like brain who giggles at the “do do” in sentences such as “When you do do that…”, I always appreciate juvenile humor, but that’s not even a joke.

The real reason nothing happened was the last-minute deus ex Mount St. Neal and its oozing pus, which took a teary Neal Gottlieb from the game.

While I empathized with his sadness, my only real feeling in that moment was frustration and annoyance—and not because, as Aubry pointed out, he left the game without bothering to “reach into the family jewels” to transfer his idol to her.

Instead, it was because of how all this played out.

The pre-Tribal strategizing at camp was interrupted by Jeff Probst coming on on a boat with medical and grandstanding, using the doctor as his puppet. Wound Show and Tell at the immunity challenge was one thing; this was another level.

Probst was in “grind out some exposition” mode with the doctor, parading contestants in front of them and then asking questions about their bodies: “Let’s just walk through”; “take us through”;  “assessment on this is what?”; “Let’s spin [Neal] back around”; “Being close to the knee…”

Dr. Rupert played along but kept to medical terminology, such as identifying one wound as “a big nasty spot.”

All of this felt like someone trying to wring an extra drop of water out of an already dry towel. Plus, it was just unnecessary. Every player is seen privately by medical at challenges, and if there had been something serious with any of these players, it would have/should have been dealt with then. (It was interesting, however, to learn that Aubry was being put on antibiotics; typically, we’ve heard that medical will provide bandages or other minor care, but this was a rare acknowledgement that contestants take medication during the game. Sometimes it’s their own prescription; sometimes it’s malaria pills; sometimes, apparently, it’s antibiotics.)

I absolutely believe the medical staff were really were concerned about Neal’s health—especially since we now know that, after exiting the game, both Liz and Peter were flown back to the US for treatments on infections. Similar infections on those still in the elements was, I’m sure, a grave concern. But it really seemed like the entire camp visit was anything but an excuse to do that with a big on-camera moment, since those challenge exams occur off-camera.

Equally frustrating was the arbitrariness in terms of how this affects the game.

When Caleb almost died and left the game, there was still a Tribal Council. Neal leaves, and there’s no Tribal Council, but he gets to go to the hospital and then come back to the jury? What? While that’s not quite rejoining the game, it’s close, since the jury members are kept sequestered and talk about the game as they prepare to make their decision (even though they’re technically not supposed to).

The game’s integrity relies on its consistency. It’s one thing to have to adapt to something monumental and unexpected; it’s another to consistently be inconsistent. It makes the game seem like it’s being steered by production.

The really tragic part of Neal’s exit was that he was a key player in a possible turn of events to make the game turn away from over-confident Scot and Jason.

With the brains in the minority, four to the seven combined original brawn and beauty members, there was a possibility of turning on the brawns, and Neal’s idol might have assisted. That said, Debbie’s clay-flying-off-a-pottery-wheel approach to alliances and strategy wasn’t helping to make that more likely. For all we know, a brain tribe member still might have exited at Tribal, had their been one.

There may be hope; Nick said that “when everybody feels safe is when you do your damage.” But I also doubt that, given the current circumstances, he will do anything but try to ride the two obnoxious jerks to the end. Ugh.

As Jason said about all of their wounds, the Survivors have “embraced the suck and kept going.” I guess I’ll try to do the same.