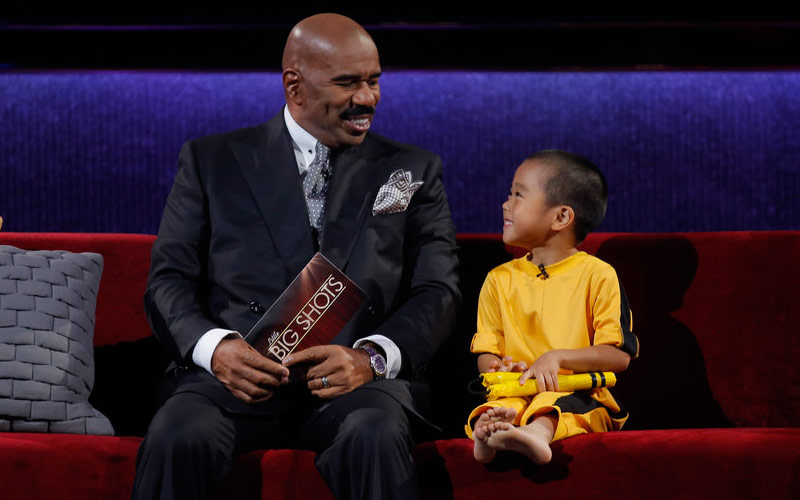 It’s no secret that broadcast reality television has been struggling for the past few years to find the next hit. Sure, there are very successful shows, ones that get renewed and have solid audiences. But there hasn’t been a breakout hit.

Until now. His name is Steve Harvey.

Yes, Steve Harvey is not a show; he’s a 59-year-old comedian and host. But he’s the connection between two of the breakout unscripted hits this past year.

NBC has just renewed Little Big Shots for a second season, and that was an obvious call: last night’s episode had 14.8 million viewers. 14.8 million! No other prime-time show last night got half of those viewers. And that’s just last night; once 3-day ratings come out, it’s sure to grow.

The preview episode, which was rerun last night, has now reached 22 million people. The rerun alone beat every Sunday scripted show, and it’s on track to be the top-rated unscripted show on TV, and the second-most popular show—moving past The Voice, which has about 13 million viewers. No network has had that kind of reality TV debut since X Factor in 2011, NBC said in its excited press release.

The Warner Horizon Television show, executive produced by both Ellen DeGeneres and Steve Harvey, has him interviewing and interacting with talented little kids. The first guest was a 4-year-old kid who could swish a basketball through a net from several stories off the ground.

That was insanely impressive, yes, but really, this is a familiar format: a typical NBC shiny-floor series, with the same look and feel as The Voice, and a similar hook to NBC’s other big hit unscripted series, America’s Got Talent.

But the fun of the show is Steve’s reaction to the kids—and to the show itself, like his fear of being raised in the air on a rickety platform with the super-low guard rail he stood on with the kid. That was just episode one, kid one.

Meanwhile, summer’s breakout reality hit was Celebrity Family Feud. When ABC renewed it, the press release noted that it was “most watched new summer show on network television this past summer, which averaged a 2.4 Adult 18-49 demo rating and 9.4 million viewers” in live+7-day ratings. That made the show “ABC’s highest-rated summer show in two years and also the second most watched among all shows on broadcast last summer.”

Let’s be honest: What works about that show is not the game, which is actually kind of dumb (Guess what some people said to random questions! And if you can’t guess them all, the other team can steal all your points by guessing just one!). Instead, again, the show comes down to his reaction to the contestants’ answers. His facial expressions alone can make even the most boring answer hilarious.

This is a show my 88-year-old grandmother loves and never misses, and it’s because of Steve Harvey.

I don’t know what political party he belongs to, but I’ll bet he could mount a successful third-party run for the White House right about now. Until then, he is delivering what broadcast reality television desperately needed.