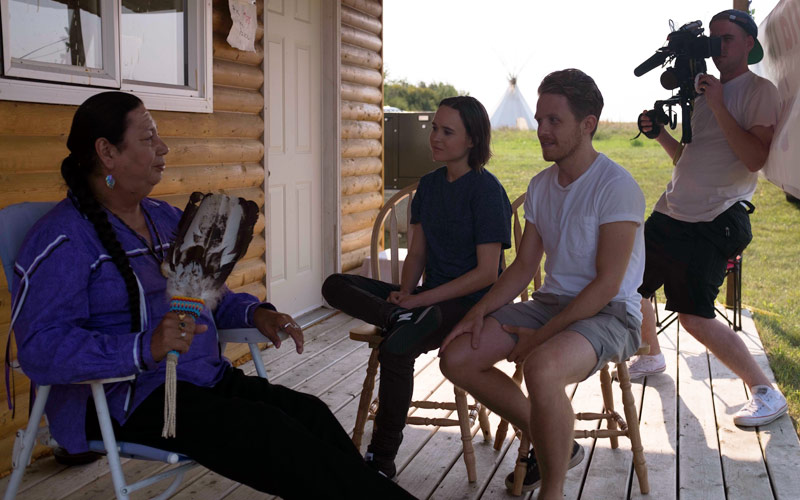 Ellen Page and Ian Daniel (center) interviewing a someone for their Viceland show Gaycation. (Photo by Viceland)

On any other network, Gaycation might be a different kind of series, one that highlights gay-friendly hotels; takes cameras into crazy parties at wild clubs; or films elaborate gay weddings. But on Vice’s new cable network Viceland, the show is less vacation and more interrogation—and that makes for an excellent reality series.

The show stars actor Ellen Page and her best friend, Ian Daniel, both of whom are gay. (Ellen came out two years ago.) In the second episode, filmed in Brazil, Ellen is riding in the back of a car as she talks about how culture and media around the world emphasize heterosexuality as the norm.

As a result, she says, “infused in you is a feeling of shame, and sometimes I think you don’t you even know how much that’s affecting you for a really really long time.” She continues, “Particularly after coming out, it became so clear to me how much that held me back. I just wish people coule get over it. There’s gay people, there’s trans people. Can we move on?”

We have not yet moved on, alas, but shows like Gaycation (Viceland, Wednesdays at 10) might help us take one more step forward. The show hovers on an interesting activist line, part explanation, part argument. In the trailer, Ellen Page says, “I’m on a journey to explore what it means to be lesbian, gay, bi, or trans all around the world.”

That’s what this is: an exploration. It’s not a travelogue; there is no advice about where to go on your own gaycation. But there’s something far more interesting.

Conversations with gay and straight people around the world

There’s a way in which a foreigner dipping into a culture for a few days and trying to explain it to Americans could be superficial at best, offensive at worst. Gaycation mostly avoids both extremes by letting people speak for themselves. Sometimes, yes, it makes larger statements about cultures and people, but mostly it’s just individual stories, and they are well-told, even when they’re brief.

Most of the show is Ellen and Ian interviewing people—presumably discovered out by an advance team from the production—and talking to them about their lives. In Brazil, a trans woman who runs a brothel. In Tokyo, the “Rotten Women” who seek out manga and audio book versions in search of a feeling of being “embarrassed” by discovering two men having sex.

In that way, they’re letting people speak for themselves, though they definitely sometimes ask challenging questions.

Perhaps the best example of that is in the second episode, where Ellen interviews a politician who advocates for parents to essentially beat the gay out of their kids, and has a surprisingly decent conversation with him. Later, Ian and Ellen talk with a former police officer turned hit man in Brazil who’s proud of the number of gay people he’s murdered. As horrific as that man’s behavior is, they get at its root cause: this despicable, sad old man had a gay son, who he rejected thanks to the homophobia that had been infused in him.

As you can see in that episode, and in the others that have aired so far, the show ends up finding all kinds of contradictions. Sometimes it’s cultural, like Japan’s embrace of a flamboyant gay star on television but the rejection of public displays of affection. Or it’s the cross-dressing by straight men and other forms of wildly accepted behavior that occurs during Brazil’s carnival, while the man who organized a local gay pride parade was attacked.

Most of the show is structured as those conversational interviews, and the editing doesn’t always transition smoothly between them—though the cinematography and footage of the places is frequently gorgeous.

There’s also casual, non-interview interaction. For example, there’s a wonderful fourth wall-breaking moment when the crew is dancing in the streets of Brazil. My singular complaint about the series is that I want more of that, just Ellen and Ian relaxing into the environment with each other or with people there, and not being in interview mode.

The most emotional moment of Gaycation’s early episodes does just that, and comes in the first episode (watch below), where Ellen and Ian meet a man who is essentially rented as a friend to people. A young gay man hires this friend, and then invites Ellen and Ian—and the camera crew—to be present as he comes out to his mother in his one-bedroom apartment.

Ellen and Ian sit on his bed as he awkwardly but incredibly tells his mother about his sexual orientation. “I found myself…interested in men,” he says. The mother first leaves, unable to process everything, and when she returns, Ian tells her that he understands the awkwardness of the entire situation: “We acknowledge that on some level, we put you on the spot,” he says, adding that it was “very brave for you to come back and face your son and face the truth.”

The mother tells her son, “It’s not something you have to apologize for. I think for me to accept it, and gradaully understand it, would be best for him.”

Ellen tears up, the mother tears up, viewers probably tear up. It’s an incredible scene, even with the weirdness of cameras intruding on such a private moment.

It’s not the kind of moment someone would typically have on vacation in Tokyo, but it’s a perfect reflection of what Gaycation does so well: humanizes people, whether they’re gay, straight, bi, lesbian, trans, or queer.