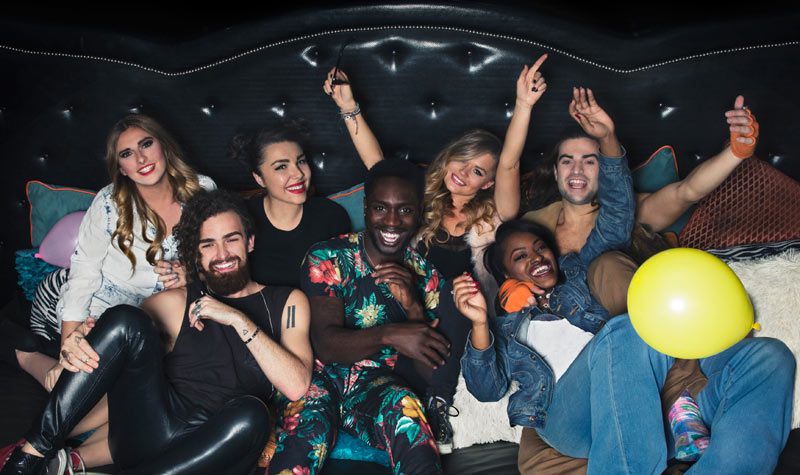 The cast of MTV's The Real World: Go Big or Go Home. (Photo by MTV)

For well over a decade now, those of us who grew up with The Real World in the 1990s have lamented the decline of the MTV show that defined both a new genre of television and, in many ways, defined a generation.

I’m one of those who felt long abandoned by the show that literally changed my life. But as much as I can pick apart the actual, on-screen changes, from the behavior to the editing to the focus, I have to admit that part of what changed is me. The show adapted to stay relevant to MTV’s primary audience, 12- to 24-year-olds, and I just stopped identifying with the people who the show was casting. As the show cast stronger, more volatile personalities, it attracted similar people to apply, and kept building on those extremes.

The Real World Las Vegas is often cited as the season when things started going downhill, when the drunken party took over and chased out everything else. The season that debuts tonight, season 31, is also set in Las Vegas, and I guess there’s poetry in that.

Because what debuts tonight is not the show I grew up with. And though it has shades of what the show became, it is no longer The Real World.

What Real World has become

As the first episode of season 31 makes clear, and the show remains strong in terms of its production values, exuding energy and life. There’s creativity in the choices made in post-production. The show breaks the fourth wall in interesting ways, acknowledging its own artificiality—or at least, acknowledging certain parts of it.

There are occasional moments of depth that suggest the cast members and show are capable of more, particularly a group conversation at the end of the first episode, though the show doesn’t linger there in the way it lingers on the partying and stupidity.

The new cast hasn’t even been together for a day and they’re already read to hook up. There’s drinking and stupidity and misogyny (male cast members laughing together about a woman’s “disposable” “one-use” vagina) and sexism and racism (“black people like you”) right away. They move from a conversation about the confederate flag to the bar, because partying is easier. The issues and tropes and roles feel tired and old.

So why is all this a completely different series? I mean, none of that is exactly new, right?

The show has changed because access to this party has to be earned via challenges. In order to even get in the house, they have to bungee jump out of an hot air balloon. A crew member (there’s no host) describes these in the first episode as “go big missions,” and failing to complete one means a cast member is out and someone replaces them. There’s nothing to do but do challenges and party; that’s what these strangers have been brought to Las Vegas to do.

While there are shades of Road Rules, which was Real World but mobile and with challenges, the show has instead become its its spin-off: The Challenge, which interrupts drunken fights and hook-ups with competitions. One of the cast members even says that during the first task: “Am I on the Challenge or am I on Real World?” Another refers to the cast as a “team.”

I can appreciate the network and production company’s need to deal with declining ratings by shifting to stunts like the last two seasons have introduced, however disappointing that may be. And even though the show may have escaped cancellation, I’d almost rather it have been cancelled and this mess be called something else.

But that’s an emotional response and this is the business of television.

Look, though, at what the trailer for the season emphasizes. This is supposed to draw people in, and instead it’s aggressively forefronting all of the ugliness, the triviality.

Yes, early seasons of The Real World had ugliness and stupidity, and trivial moments in between. The show horrified some observers because of its artificiality (Remember that quaint old argument that no 20-something could afford the kind of place that the cast lived in, which made the show the opposite of the real world?) and its voyeurism. But oh, how different those things were—maybe just because we, and our culture, were less used to the public display of all this.

It’s impossible for me to experience The Real World: Go Big or Go Home version of the show without recalling the original, without seeing its gradual slide into the trash compactor. Maybe I’m just like those 1992-era critics; maybe to 15- or 18- or 21-year-olds, this show is a documentary about life in your late teens and early 20s.

But let’s not kid ourselves: there is nothing new or groundbreaking or surprising about The Real World any more.