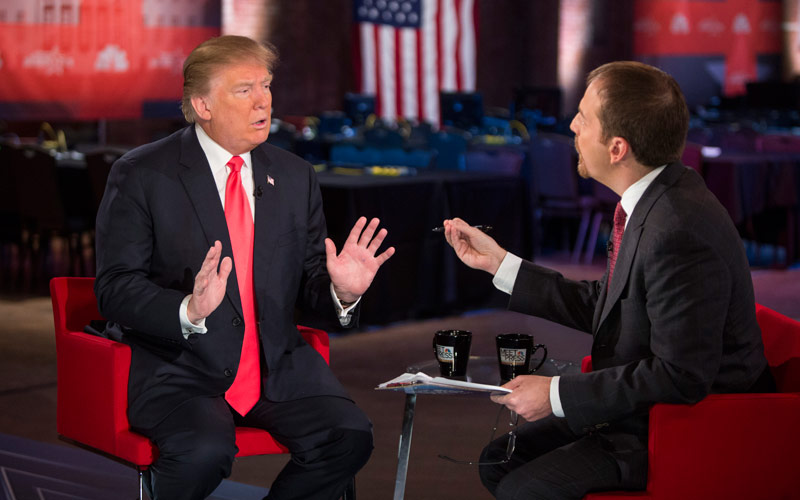 Donald Trump, Republican presidential candidate and former host of The Apprentice, on Meet the Press with Chuck Todd, right. (Photo by Scott Eisen/NBC)

Donald Trump, former host of NBC’s The Apprentice, won seven of the 11 primary elections that took place yesterday, Super Tuesday, adding to three previous victories. He may become the Republican nominee, and perhaps even the next President of the United States. He is, clearly, very popular among a certain group of voters. But why?

Why is the man who made comically arbitrary decisions about which celebrity to pretend-fire on The Celebrity Apprentice appealing as the potential leader of the free world? What do people find appealing about his complete denial of facts and reality?

Why was I so very, very wrong when I just wrote him off as running for attention when he announced his candidacy?

This is not about ideology; I’m not asking, “Why is a Republican popular?” Some of my Republican family members are horrified by him; ditto for my conservative friends, one of whom expressed disbelief over his agreement with John Oliver’s must-watch, blistering takedown of Trump’s appeal, which uses Ivanka and Don Jr.’s own words against him:

Trump the authoritarian, not Republican

That’s because Trump resembles no other Republican, perhaps because he was a registered Democrat and gave lots of money to Democratic candidates. He does not have a clear conservative ideology. He doesn’t even have a clear ideology: On 20 different issues, he’s changed his mind multiple times since August.

What he does have, however, is a quality some people are desperate for right now, according to research. Those people may not identify this way, but they’re identified as authoritarians, who Vox’s Amanda Taub describes in her outstanding piece on this phenomenon:

“Authoritarians are thought to express much deeper fears than the rest of the electorate, to seek the imposition of order where they perceive dangerous change, and to desire a strong leader who will defeat those fears with force. They would thus seek a candidate who promised these things. And the extreme nature of authoritarians’ fears, and of their desire to challenge threats with force, would lead them toward a candidate whose temperament was totally unlike anything we usually see in American politics — and whose policies went far beyond the acceptable norms.

“When they face physical threats or threats to the status quo, authoritarians support policies that seem to offer protection against those fears. They favor forceful, decisive action against things they perceive as threats. And they flock to political leaders who they believe will bring this action.”

Trump is that kind of politician, and his “forceful, decisive action” should sound familiar. After all, that’s what he was known for on The Apprentice, however comical that action may have been.

Taub’s entire piece is worth a read, as it explains, in great detail, a demonstrated link between people who have authoritarian tendencies and support for Donald Trump.

Read The rise of American authoritarianism

Survivor is a democracy, The Apprentice is not

The primary difference between Survivor and The Apprentice, besides the location, is that instead of democracy, there is central, unilateral power. Trump made each episode’s major decision, choosing who to eliminate and, later, who wins; on Survivor, the contestants do that. There’s even a jury, which is baked into our democracy via the Constitution.

(Of course, on both shows, producers create the context in which this decision-making occurs. And there’s an argument here to be made about Jeff Probst’s authoritarian reign as showrunner and how that may or may not affect the show’s democracy, but we’ll save that for later.)

As The Washington Post recently recounted in its detailed history of the show, Mark Burnett wanted to produce a reality show in the United States, to be closer to his kids. Burnett also wanted, as he told the paper, “someone larger than life, very colorful,” who would make all the decisions. The Post’s Marc Fisher wrote:

“‘The Apprentice’ turned Trump from an easily caricatured Richie Rich who had just weathered some difficult years into a pop-culture truth-teller, an evangelist for the American gospel of success, a decider who insisted on standards in a country that had somehow slipped into handing out trophies just for showing up.”

Burnett found “a decider” in Donald Trump, just as voters are finding Donald Trump to be their authoritarian “evangelist.” Would he govern the same way?

While Survivor and its democratic process has survived and maintained consistent popularity for much of its 16 years (yes, after an initial ratings drop-off from its early highs), The Apprentice and its authoritarianism peaked and then faded. Perhaps that will happen to Donald Trump, too, either during this election cycle—or after he’s served a term or two as president.