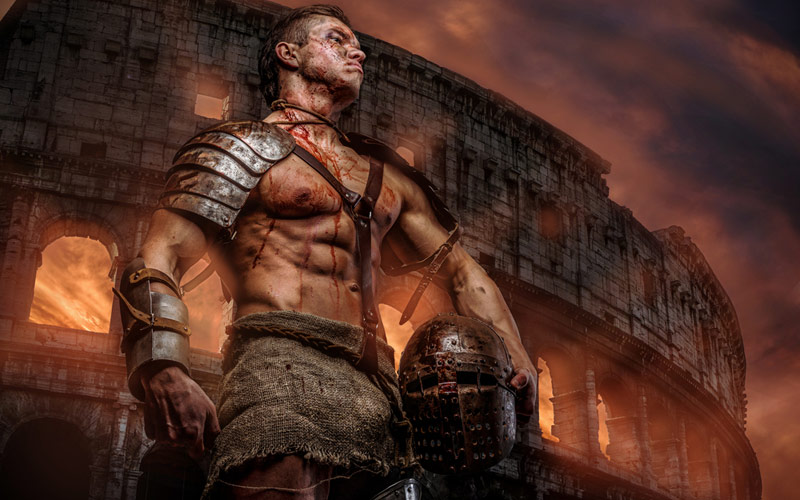 Is there a difference between reality TV, pro sports, and this bloody gladiator in front of a coliseum? (Photo illustration by Shutterstock)

In this edition of The Confessional, Cary O’Dell writes about the possibility of death on U.S. reality TV. This essay was written before the most-recent episode of Survivor, on which three people collapsed and needed medical attention during a challenge that was held in blistering heat, and raised questions about the producers’ responsibility.

Surely, it is only a matter of time before American reality TV claims its first victim. The badly-planned, badly-timed immunity challenge or the combustible interpersonal conflict that goes horribly wrong and grows horribly out of hand. Actually, it’s rather surprising that nothing has gone wrong yet in any US show.

After all, as Shakespeare once wrote, “These violent delights, have violent ends.”

Of course, we have come close. A contestant from NBC’s 2002-2003 series Dog Eat Dog filed suit, claiming to have gotten brain damage from a poorly executed underwater competition.  And, overseas, there have been fatalities.  In 2013, the French version of Survivor saw the death of one contestant during a competition; in 2009, a contestant died on the Bulgarian version of the show. Both were men, both died during game play and both died of cardiac arrest.

The high number of reality shows currently on the air (and with plenty more to come), and with their weekly need to try to constantly out do themselves—and each other—means that their on-air stunts will only get riskier and riskier.

Ultimately, sadly, then, it seems that the question is not Will this happen? but When? And, when it does, how will we deal with it?

I can imagine that after a tragedy eventually takes place on reality TV, a major national outcry will dutifully follow. Politicians, journalists, a lot of cable pundits and even a few TV producers will be anxious to lay blame, demand change and wring their hands over the entire saga. And then, after a few lawsuits and promises from producers to monitor more carefully their programs, all the shows will resume just like before. And we will rush back to our televisions.

But, before we—critics, politicians and viewers—demand a preemptive ban, or at least reform, of some of reality TV’s accidents waiting to happen, we must first put this genre of television (and its inherent risks) into context with other contests, sports, and entertainment, televised or not.

Would a death or major injury on Survivor or in the Big Brother house be any different from the death on a playing field? We have witnessed on live TV football players get crippled on the field or boxers killed in the ring. Recently, we watched racecar driver Justin Wilson suffer a head injury that he died from the next day. And the world of extreme sports,” from mountain climbing to “free diving,” is littered with tragic stories and untimely deaths.

Meanwhile, those who reject the risky world of sports for the supposedly safer world of fictional entertainment also cannot take solace (nor a moralistic stance) in this choice either.  There are life risks even in this world of elaborate Hollywood make-believe.

Consider professional wrestling’s loss of Owen Hart in 2000 right there on the canvas. Meanwhile, a stuntman lost his life on the set of the original Spiderman back in 2002.  Along those same lines, renowned stuntman Dar Robinson died in 1986 in one poorly-planned movie action sequence. And stuntwoman Heidi Von Beltz was paralyzed in another in 1980.

Even non-stunt performers aren’t safe, recall the deaths of actor Vic Morrow and two child actors on the set of the Twilight Zone movie in 1983. In more recent years, at least six people were injured during Spider-Man: Turn Off the Dark on Broadway because of that show’s on-stage stunts.

Yet, for all this mortality, NASCAR hasn’t been outlawed; football is still being played; the WWE is as popular as ever; and every blockbuster this past summer has come with spectacular death-defying stunts attached. (Think of Tom Cruise in the latest Mission: Impossible.)

So is there a difference?

The world of Olympic and professional sports might be far more high-brow than the lowly world of reality TV. And the world of the “legitimate” stage or big screen might bring with it far more respect than some primetime programming but a death is still a death.

In the end, big time sports and big-screen action adventures are no more important, or vital, or meaningful than a contest in the backyard of the Big Brother house despite the amount of money, viewers, history or sentiment involved in one and not the other.

Certainly it is, to some extent, an ugly, perhaps primal blood lust—harkening back to the days of gladiators—that seem to turn to reality TV for. But it is this same vicarious visceral thrill that we also turn to professional sports and action movies for.

And we can’t be smug and highbrow about it. We can’t condemn one without condemning the other.

Corrections: This story has been corrected to reflect that Owen Hart’s death was not broadcast on TV, and that Justin Wilson did not die on the track, but instead suffered injuries that he died from the next day.