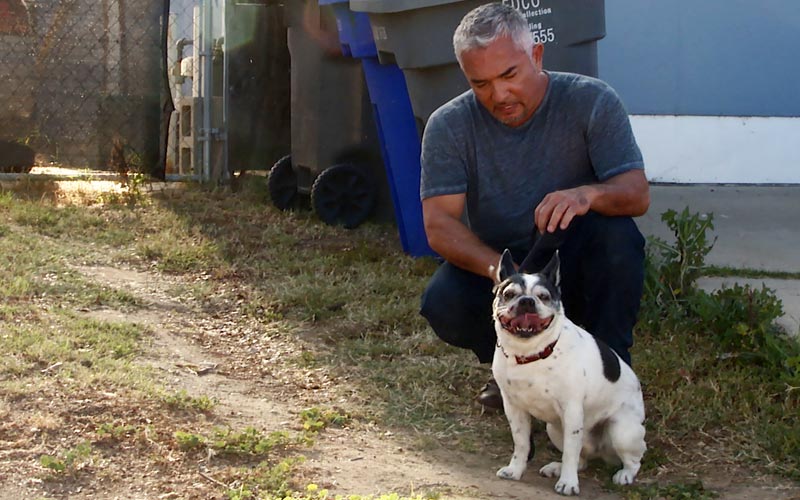 Cesar Milan with Simon, the dog that attacked a pig during a season-three episode. (Photo by Cesar 911 Crew/National Geographic Channels/

A scene from the Feb. 26 episode of Cesar Millan’s NatGeo WILD series Cesar 911 has prompted an investigation from Los Angeles County authorities and has created an uproar online. So what happened?

What happened when Cesar Millan trained a dog around pigs

The network released this statement:

“In a recent episode of the Nat Geo WILD series Cesar 911, Cesar works with an aggressive French bulldog/terrier mix named Simon, who has a history of attacking other animals, including his owner’s pet pot-bellied pigs. A short clip from the episode was shared online and showed Simon chasing a pig and nipping its ear, causing the ear to bleed. The clip caused some concern for viewers who did not see or understand the full context of the encounter.

We have included an additional clip from the same episode to provide missing context. Cesar has created a safe and controlled environment at his Dog Psychology Center (DPC) in California in which to rehabilitate some of the most extreme—or ‘red zone’—cases of dog aggression, such as Simon’s. It is important to clarify that Cesar took precautions, such as putting Simon on a long lead to assess his behavior, before making initial corrections and removing the leash. The pig that was nipped by Simon was tended to immediately afterward, healed quickly and showed no lasting signs of distress. As the additional clip reveals, Cesar and his animal pack effectively helped Simon to overcome his aggressive behavior toward other animals; as a result, Simon did not have to be separated from his owner or euthanized.”

The “additional clip” with “missing context” (watch it here) isn’t exactly context: it’s a scene from the next day, when Cesar has Simon successfully interact with pigs, including being taken on a walk by the pig that bit him.

The network won’t take any punitive action. “Why would we punish him? He didn’t do anything wrong,” NatGeo senior vice president Chris Albert told TheWrap.

Cesar told The AP, “I do have a large group of fans and a small group of people who don’t agree with me. They are taking this the wrong way and blowing it way out of proportion.”

Separately, he told People, “This is what I love about America. In America, animals have rights to a certain extent. And when somebody complains about it the law enforcement have to come and supervise. They do it to everybody and they’re doing the right thing.”

A post about the incident on his web site says, “Cesar Millan is and will continue to fully cooperate with authorities in ‎any investigation. He is confident that the investigation will show there was no wrong doing.”

The dog’s owner, Sandy, is in a video published to Cesar’s YouTube page and included in the post mentioned above. In it, she says, “it upsets me profoundly that people have mischaracterized what happened.” She explains that “Simon had a lifelong history of aggression toward animals, including my two pot-bellied pigs.”

The County of L.A. Department of Animal Care and Control is investigating, and wants to see the pig and talk to every person who was present.

Its deputy director Aaron Reyes told The Los Angeles Times that “There’s no question that what happened happened. A dog under Cesar Millan’s control escaped and attacked another live animal, in this case a pot-bellied pig.”

“The dog that was in question, that Cesar was attempting to train, broke away from him in the video, and immediately charged the pig. Now, what we’re hearing from the [complaining party] is that the biggest concern is someone had that pig, a male adult was holding one of those pigs, those rear legs, and holding the pig up, which made the pig squeal, which made the dog [go] into a frenzy. And it immediately charged at that pig. And the dog attacked.”