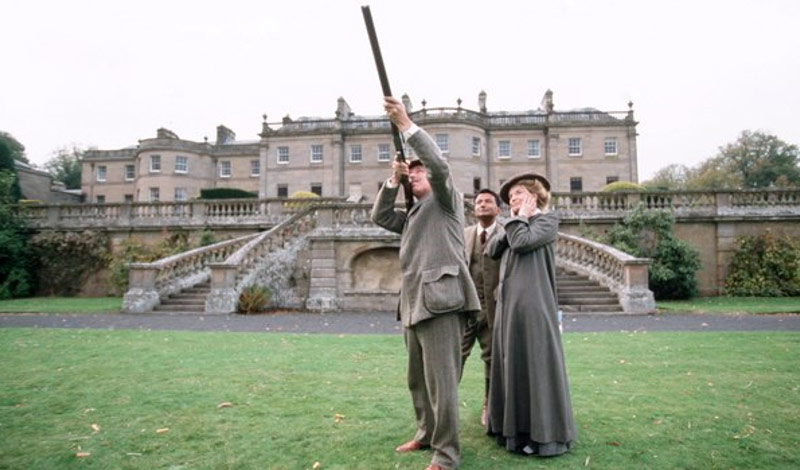 John Olliff-Cooper with a gun during Manor House's living-like-aristocracy experiment. Hunting was one of many sources of tension and drama. (Photo by Channel 4)

Downton Abbey has ended its six-season run on PBS in the U.S., so there’s only one logical next step for soapy television dramas about aristocracy and domestic servitude: resuscitate Manor House! Television is all about nostalgic revivals right now, so there’s no better time.

Manor House, known as The Edwardian Country House in the UK, was the best of a type of reality series that aired in the UK and US in the mid-2000s. It was the third of the Channel 4-produced time period series, which started with The 1900 House and The 1940s House. PBS would go on to not just air those shows, but also produce its own, including Colonial House.

All of them had their cast members live in a certain time period, from taking on certain roles to wearing appropriate clothing. PBS still has the show’s full web site online if you want to learn more about how it worked.

The last time I went on a nostalgia kick about the show, the only way to watch now was on DVD. But now, it’s also on Amazon, free for Prime members, and it appears that it’s just $1.99 to buy the whole season.

If you haven’t ever seen it, you owe it to yourself to experience these six outstanding episodes:

It’s also clearly time for these shows to return.

Bring back Manor House, and all the Houses

Yes, I realize the luxury of having a cast live in a time period-accurate place for three full months and just documenting what happens may not seem realistic in this current era, where it’s hard to get any show greenlit.

But I’ll try anyway: What’s so great about Manor House is that there’s nothing like arbitrary class division to stoke conflict and drama—I mean, create stakes people will care about. While a show about a historical time period may not fit into any network’s bucket, we all know the bucket’s contents resemble a chamber pot anyway, so dump it out and add a show with universal themes that will resonate with any audience.

In 2013 at TCA, I talked to Beth Hoppe, PBS’ general manager and chief programming executive, who was involved in developing and co-producing many of those series, and basically asked her directly if they’d bring these shows back. “I would love to get back to that space, but I feel like we’d need a modern twist, and I’m not sure what that is,” Hoppe told me. When those programs, at the time, were really new and groundbreaking and different. And I think to just to go back to something we did successfully 10 years ago, I don’t know that we’d go there. But if we could figure out—we’re having conversations about what could we do that would take it to the next level.”

She makes an excellent point, and just doing the same thing again 10 or 15 years later isn’t the best idea, even though nostalgia wants to convince me otherwise. Also in our interview, Hoppe said, “Frontier House, 1900 House, Colonial House, Manor House—all of those, from the beginning, we added that element of a fish-out-of-water that made it fun to watch.”

So, here’s a proposal for a modern twist on that fish-out-of-water. I think these shows offer a perfect opportunity here for role reversals. And Manor House is the perfect format to illustrate modern inequity. Cast some Wall Street or Real Housewives-types as the downstairs servants and Bernie Sanders voters as the upstairs family.

Or, to comment on celebrity culture, what about a celebrity version, where the entire servant quarters are filled with celebrities, even the D-list ones who keep getting recycled for every reality show, while a typical American family is upstairs?

I’ll stop with the lame ideas. But my point is that the format is ripe for drama—and characters, and stakes, and everything else that reality shows look for. Let’s not forget the drama. Here, I’ll quote one of the cast members, John Olliff-Cooper, the head of the house:

“I really don’t have problem with having servants…if I’m not being served, they don’t have a job. This is absolutely magnificent. I’m enjoying it.”