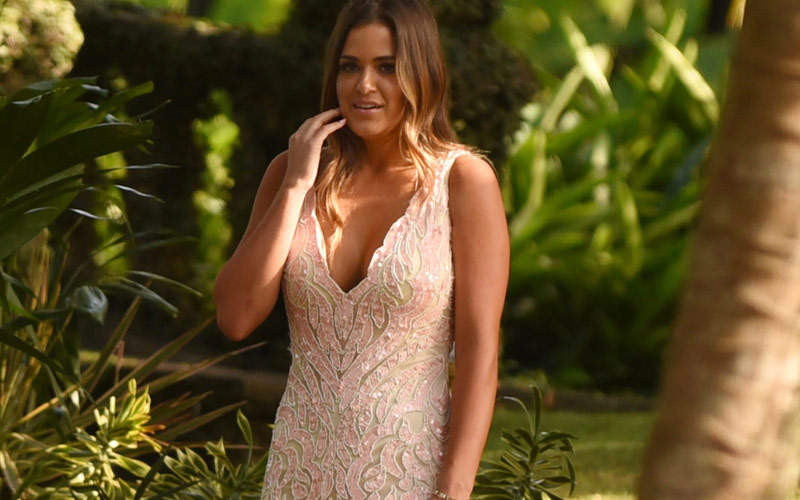 JoJo Fletcher, dumped by Ben Higgins, is now the star of The Bachelorette 12. (Photo by Matt Dunn/ABC)

The Bachelorette‘s producers held back a Twitter revolt from its vocal audience and chose JoJo Fletcher—dumped by Ben Higgins during the finale of The Bachelor—as the star of season 12. She was chosen instead of Caila Quinn, who until late last week seemed like she was going to be selected, and she’d apparently even been filming. Bachelor fans lashed out after reports suggested that Caila would be selected.

Because Caila’s mother is Filipino, she would have been the show’s first non-white star, and her background was discussed on the show. But does The Bachelorette have a non-white star in JoJo, whose race/ethnicity wasn’t discussed? JoJo’s mother is from Iran, but it’s not clear how she identifies herself, and the show didn’t address this beyond JoJo’s official bio, in which she describes her “cultural background” this way:

“My mom is Persian, and my Dad was born and raised in Tennessee. I’m proud of my mother’s background despite what social opinions are. It’s important for me to stand up to people stereotyping Iranians.”

Are Persian people considered people of color, or are they white? In 2010, CNN reported on “a practice that dates to the late 19th century, when immigrants from the Middle East began identifying themselves as white.”

In other news, JoJo’s brother, Ben Patton, was one of the suitors on NBC’s Ready for Love, the low-rated, pulled-after-two-episodes Bachelor knock-off. She is much more popular than that show was.

Update: ABC’s press release mentioned nothing of JoJo’s ethnic background but instead called her a “Southern Sweetheart.”

A promise, sort of, that diversity was coming

Reality Steve first reported the news that Caila had been dumped earlier today: “They led her to believe it was her, she was convinced it was her, they shot her intro package that day in Ohio, then they told her at pretty much the last minute, ‘We decided to go with JoJo.'”

In January, ABC chief Paul Lee said, “I’d be very surprised if [the bachelorette] in the summer isn’t diverse. Maybe I shouldn’t have said that, but I think that’s likely to happen.” In February, Paul Lee was fired, but I’m sure he’s very surprised, wherever he is today.

Later that day in January, Bachelor creator and executive producer Mike Fleiss told me, “I know we’d like to add a little more diversity to the lead role, and that’s something we plan to do very soon.”

Caila seemed to be the obvious choice to be chosen as the first non-white Bachelorette—well, besides Julibee Sharpe, who was eliminated earlier in the season.

It’s worth noting that, had Caila been chosen as The Bachleorette, her casting may have also continued to reinforce stereotypes.

Actually, the show would have taken the easy way out with Caila, according to Akemi Johnson,who argues in a piece for NPR that casting Caila:

“as the first bachelorette of color would be a safe, predictable choice for the franchise. Producers could hold Quinn up as proof the shows are changing, while continuing to reflect and reinforce racial stereotypes.”

The show may also be taking the easy way out with JoJo.

Johnson also points out that:

“women of color on The Bachelor tend to follow a familiar pattern: They may face hostility and racial anxieties from other contestants, then disappear from the screen early in the season. The latest example is Jubilee Sharpe, this season’s black military veteran who fielded microaggressions from other contestants and suffered tension with the two biracial African-American and white women. On the show, these conflicts were coded with euphemisms: Sharpe was ‘layered’ and ‘complicated’ and ‘different.’ Sharpe stuck around longer than most black women, but was still eliminated within the first half of the season.”

Johnson’s full story, What Would It Mean To Have A ‘Hapa’ Bachelorette?, is a must-read: It’s a deep dive into the representation of people of color in our culture, on television, and The Bachelor/ette specifically.

Ultimately, though, it makes a clear case as to why diversity is more than just casting a person. It’s about how that person is portrayed to the audience—what the editing includes and highlights, and what stereotypes it reinforces.

With JoJo’s casting, it’ll be interesting to see what the show does, and what it ignores.