Skip to Content
In episode seven of The New Yorker Presents, singer-songwriter Courtney Barnett stands in front of her photography. (Photo by Jeffry Neira/Amazon Studios)

During the opening sequence of Amazon’s The New Yorker Presents, covers of the magazine come to three-dimensional life. As the camera pulls back, pieces of the covers fall into place, layer after layer; butterflies surrounding a figure’s head flap their wings and fly away, revealing another cover. This gorgeous presentation signals what’s ahead over the next half-hour or so: richly reported, finely crafted stories from the magazine distilled into moments that explode visually on the screen.

Amazon’s first unscripted reality series has now released its entire first season, two episodes a week. Though they are short, just a half-hour each, this isn’t binge-watch television.

It’s not unlike Netflix’s Chef’s Table in the way it sometimes prioritizes visuals, but it is precisely the opposite in terms of content. Each of those hours is an exploration of one chef and their philosophy and food; each of these half-hours is several stories. That’s not to say that the stories don’t have depth and weight, though—even the shortest moments do.

The television show, as produced by Kahane Cooperman, offers more room to breathe between stories than the pilot did. All (except one) of the stories come from the archives of The New Yorker, and what comes between the stories are small slices of life at the magazine and in New York City. They’re spare, without narration.

My favorites are the cartoons, time-lapse cameras watching over the shoulders of the magazine’s cartoonists as they create the magazine’s signature single-panel comics.

Each episode may be comprised of several smaller pools, fragments of the stories they inspired, but they’re deep pools. Though the episodes are just half-hours, they feel longer and more substantial; time can pass slowly, though that’s a benefit, not a burden. They’re feature stories, slices of life that contain information but—like the best reality TV shows—just introduce us to new people.

The documentaries and shorts are all directed by different individuals, and each adds makes stylistic choices that make their work distinct, though everything on the show inhabits the same stylistic universe. Rob Epstein and Jeffrey Friedman’s episode-eight story about pastor Rob Bell, who very publicly challenged evangelical Christianity and the war in Iraq, among other things, starts with under-water footage of surfing.

Executive producer Alex Gibney’s episode-one piece on the CIA concealing information from the FBI about terrorists in America long before 9/11, collapses some of the interviews so it’s almost as if the subjects are talking over each other, creating urgency and tension. 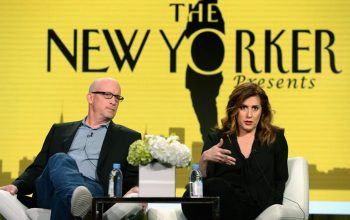 Interview: How The New Yorker Presents was produced

Hoop Dreams director Steve James’ episode-two story about young rodeo riders is devastating, thanks to small moments he captures—and the horrifying fear that arises watching a kid fall from a bull and cower under its rampaging feet.

I’m especially fond of the profiles, which often let people tell their own stories. In episode four, A Mexican luchador who works as an exotico, Cassandro, and happens to be gay (“When I’m wrestling, I’ll tell myself, I’ll take care of you little kid—nobody’s going to hurt us, nobody’s going to abuse us, we’re good now, we’re free. And then I get to shine”). In episode seven, Australian singer-songerwriter Courtney Barnett talks about her photos of green room showers and her work (“It’s hard to convey how I’m feeling, which is probably why I’m a songwriter”).

Not every story on The New Yorker Presents is successful. In the first episode, a man who suffered from Truman Show delusion tells his story as his own artwork and stock footage, one of the few occasions where the visuals don’t quite reach the level of the ideas being conveyed. And the fiction can feel flimsy, more like actors having fun than inhabiting fully realized characters.