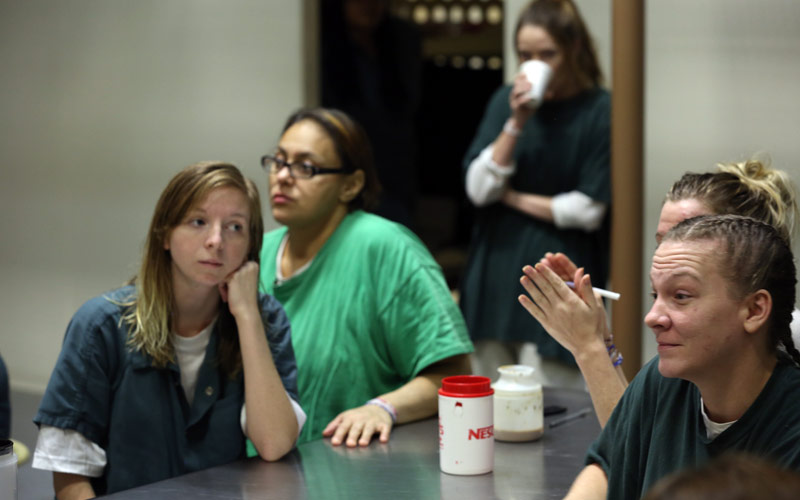 A police officer, Tami, is leaving her wife and a daughter for two months to be locked in jail, even though she’s done nothing wrong. Her only crime is agreeing to be on a reality series: A&E’s 60 Days In.

Tami’s wife, Joelle, says, “I’m afraid that she doesn’t know what she’s getting into.” Sophia, their child, tells the camera, “I know my mom is going away for a lot of weeks. I don’t like it.”

As absurd as this idea sounded on paper, I watched the first two hours with as much of an open mind as possible, wanting it to surprise me. I was definitely surprised.

The first of those hours introduces the innocent people—including Muhammad Ali’s daughter Maryum—and makes the case for why they wanted to voluntarily go to jail. Many of them have reasons that make some sense: they’re military or law enforcement who want to know what it’s like inside. Tami wants to understand what it’s like for the people she’s locked up.

Except this is an argument that falls apart upon any kind of examination.

Just like A&E’s pointless Fit to Fat to Fit, on which trainers gained weight to then lose it again, it’s an exercise in obviousness. Do firefighters need to set their own homes ablaze to empathize with those they help? Does a baker need to sit in an oven for an hour to understand what cakes go through?

The people who do go into harm’s way intentionally—firefighters, police officers, military personnel—are well-trained and prepared. They are not novices. The same is even true for other extreme reality shows. Naked and Afraid has an absurd premise, but its contestants are trained survivalists who want to challenge themselves in extreme conditions.

60 Days In is the kind of gritty, reality-of-life, ethically challenged reality television that A&E has made its thing. It’s well-produced, insofar as it’s tightly edited, creating atmosphere well.

But like the premise, it falls apart upon examination.

The show repeatedly uses the exact same footage of violence to reinforce the terror, and while I have no doubt that’s real and certainly the reality of prison life, repeating the same moments over and over again is manipulative at best.

There’s a lot of intercut footage that ramps up the tension, like scary looks, though it’s clear those are coming from different moments. (The major clue is the difference between surveillance footage, used when there is clearly no camera crew in the pod, and footage from hand-held cameras.)

Also: It may be legal, but how ethical is it to turn other inmates into reality show characters without their consent? What they think of as surveillance cameras are instead Big Brother-ish cameras, recording their every move and turning it into entertainment.

60 Days In is a kind of reality TV Orange is the New Black—which, yes, is fictional entertainment, though based on a memoir—but the A&E version offers nothing new to the conversation.

Sure, it does a swell job of illustrating how terrible and awful jail is. But is that news? I know very little about our corrections system and absolutely nothing surprised me. All it does for me is spark conversation about why this ever became a show.

The flimsy premise—that this is the only way the new sheriff could understand what’s happening in his jail—is ludicrous. On-screen text tells us that these participants are doing this “to expose crime and corruption within the jail.” When law enforcement’s only hope is this kind of reality television, there is no hope.

A&E: now with threats of prison rape as entertainment

What’s most egregious is that someone has been cast and edited to be the villain, the guy we root for bad things to happen to. This is Robert, a teacher who is confident, cocky, and ego-driven, and seems dismissive of the whole project that he volunteered for.

The first episode ends with Robert entering his cell block, alone, and it is a genuinely terrifying moment—again, the show is quite good at illustrating life in this environment. Almost immediately quickly, we hear someone say—and also get captions, though we don’t actually see the inmate saying it—“He’s new. He’s got a tight booty. I’m going to fuck him.”

Yes, prison rape as a consequence for being a cocky reality show participant: that’s where this show has gone.

By that point, Robert has been turned into such a hatable character that it’s almost a gleeful thing, like, Oh yes, he’s gonna get what he deserves!

Oddly, at the start of the second episode, when we see him enter the cell block yet again, that comment is missing. (Was it just created in editing?) Robert sets about being his cocky self, asking another inmate, “Do you get the NFL Network here?” and tells another, “This seems like a country club.” He bungles his cover story and says he ran a stop sign on the interstate. He’s such an idiot that the other inmates think he’s a cop with an earpiece. Give those men a prize!

Robert is later blamed by on-screen text that says he’s ignoring his training, as if sitting in a conference room and being talked to constitutes actual “training.” I’m not sure if his confidence comes from thinking this is a TV show and nothing can go wrong, but if this is truly who he is, casting him was a terrifying error.

The second episode ends with an inmate being sucker punched in the head, and the implication is that he’s being punished for trying to help Robert. So yes, A&E is now responsible for prison violence.

Hey, look! I found the ethical transgressions and corruption in jail: and it belongs to a television show.