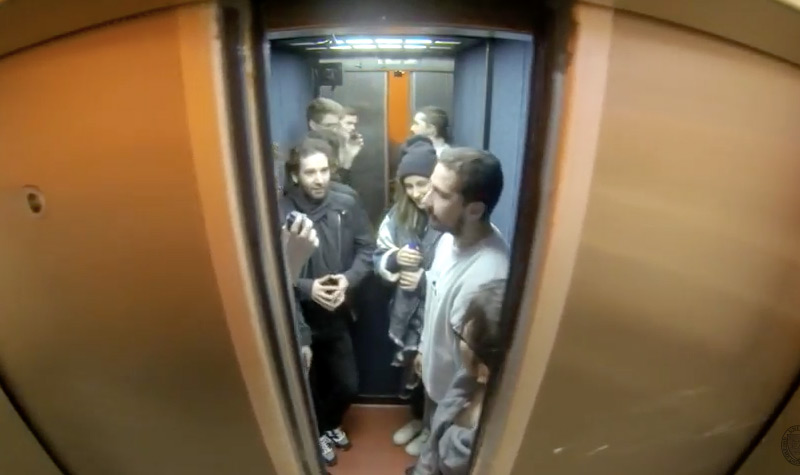 Shia LaBeouf, the actor who came to fame on Project Greenlight‘s second season, is in an elevator at Oxford for the next 24 hours, live streaming his conversations with two other performance artists and strangers. It’s a live feed that rivals Big Brother‘s, taking place in an enclosed space with not much going on—though the conversations I’ve heard so far are far more fascinating and thoughtful. (Watch below, live.)

The people in the elevator as I write this, at 12:45 p.m. ET, just gave PopTarts to Shia, Nastja Säde Rönkkö, and Luke Turner. Now someone is offering them manicures. There’s a line of people waiting to get in.

A few minutes earlier, during a conversation, Shia said, “I’m bi-polar—I would say most artists are bi-polar.” A few minutes earlier, he was talking about how he likes Kanye West’s music, which is “is inspiring,” but he also called Kanye “mysognist.” Shia said, “For a person who’s a real self-doubter to see a person like that … you can’t even figure out how the fuck that can be in a person, that incredible self-belief and self-love.”

Also in the last half-hour, Shia said, “I have faith in people, I get my answers from people—the Internet’s full of people.”

Watch the live video and audio stream below, although most of the time the footage is of a closed elevator door because the camera is on the opposite side of the door. The video’s description explains:

“LaBeouf, [Nastja Säde] Rönkkö & [Luke] Turner will be appearing at the Oxford Union on 19th February 2016 at 8pm.

For the 24 hours either side of their talk, the trio will be occupying the elevator at EC English Oxford in Gloucester Green (OX1 2BT), from 9am on 19th February until 9am on 20th February.

A live audio and video feed of the elevator will be broadcast inside the debating chamber of the Oxford Union for the duration, as well as online at https://www.youtube.com/watch?v=7KDW4… acting as an extended 24 hour talk.

Visitors will be able to join LaBeouf, Rönkkö & Turner inside the elevator during this time, and are invited to address the artists, the debating chamber, and the internet, so that their collective voices may form an extended, expansive and egalitarian Oxford Union address.”