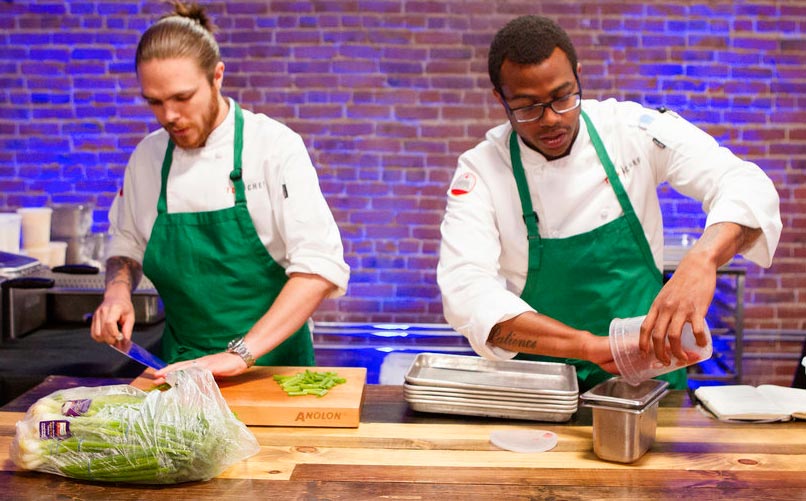 Top Chef California may not have spent much time in places other than Los Angeles, but moving to San Francisco has introduced a series of interesting challenges. After a super-intense two-part, two-service Restaurant Wars challenge, the chefs created dishes inspired by historical periods, complete with library research.

Thursday night, the chefs had to create a concept for a fast casual restaurant, and serve a dish from it. This resulted in some highs (Savory Med, Pasta Mama) and lows (Taco Dudes, I’m looking at you, bros).

Kwame freezes himself out

I don’t know how you go on Top Chef and decide to make a dish with a frozen, pre-cooked ingredient as a significant part of it. From the second he said that, I was like, He’s done, he’s going home. Replacing a fresh ingredient with a canned version has been criticized by the judges, but is perhaps slightly defensible. Building an entire dish around processed food? Eek.

“If you had made your own, then we would have had something really unique,” Tom Colicchio told him.

Kwame was the familiar Top Chef contestant who peaks early and then fizzles out, which is too bad. He did, however, leave by bringing Top and Padma close to tears by saying that he started his culinary career four years earlier as a waiter in Tom’s restaurant Craft.

A Top Chef miracle: Phillip blames no one!

Kwame was paired with Phillip by Marjorie, but Phillip seemed agreeable and didn’t blame anyone else for his decisions once. It was such a shock that I expected to see Padma Lakshmi and Gail Simmons suddenly hugging.

Phillip was this season’s villain, a perfectly calibrated level of frustrating. Bringing him (and some other eliminated chefs back) to help out for the challenge seemed entirely designed to create Phillip drama, because this was not a task that required two people—the show has asked the contestants to do this much work on their own before.

But it basically backfired, and Phillip was a non-presence—though he did actually warn against the frozen waffles!—and I’m currently giving him more attention than the actual show did, aack.

The episode was titled “Wok This Way,” a clear reference to Aerosmith’s “Walk This Way,” which unbelievably came out before I was born, in 1975. I would have guessed mid-1980s.

The quickfire challenge, making chop suey in a wok, took place in M.Y. China, the restaurant owned by  Martin Yan, aka Yan Can Cook.

I’d forgotten about my love for Yan and his show—he was my generation’s Julia Child, perhaps. He was entertaining and informative—though watching some of these clips in this playlist made him seem slightly more subdued than I remembered. At the time, though, everything from his knife work to his goofy humor were surprising to me, I’m sure.

For those of you who weren’t born yet or were busy doing other things, please meet Yan Can Cook: