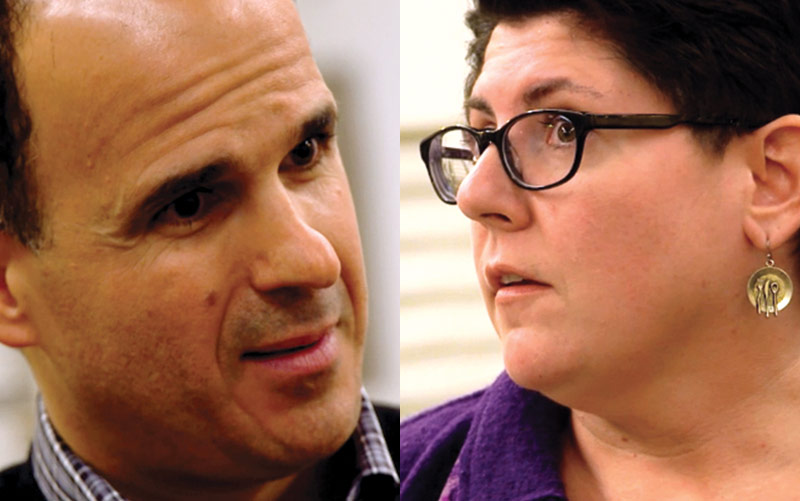 The Profit Marcus Lemonis, left, and 240sweet's Sam, right, who had this season's biggest conflict. (Photo by CNBC)

With age, business makeover shows tend to lean in to insanity. The yelling, the drama, the fighting all ramps up, as if the shows think the only path forward is to take more steps into crazy town. Bar Rescue has turned from somewhat thoughtful into a brutal farce in its later seasons. Before it ended, Kitchen Nightmares ran out of ways to have Gordon Ramsay feign shock at conditions in a restaurant and then pretend like he’d contributed something meaningful.

CNBC’s The Profit is only vaguely related to those other shows, like a distant second cousin that has always done its own thing, taking a markedly different approach to the familiar. It pulled in the best parts of those makeover shows and merged them with the investment that comes wth Shark Tank’s investments.

Marcus Lemonis is refusal to fake things for the camera and the fact that he invests his own money makes him a different kind of reality television star; he’s not being fed direction into his earpiece based on storylines his producers have already written for him.

That said, as it wraps up its fourth season, The Profit certainly has upped the drama. There’s been intense conflict: at Standard Burger, at Mr. Green Tea, at Simple Greek.  And the series’ most insane episode yet, at 240sweet, aired this season, with an on-camera, fourth wall-breaking admission by a business owner that she used the show—and $100,000 of Marcus’ money.

Everyone seems a little more willing than before to argue on camera, or perhaps the presence of cameras, producers, and Marcus inspires conversations and/or arguments that wouldn’t have occurred. It doesn’t quite feel like the invisible hand of a producer poking and prodding, the kind that UnReal illustrated so well, but there is more tension than before.

Beyond the drama, the episodes also feel tighter, more refined. They used to just sort of stop mid-story; now, there are cleaner endings. (Marcus told me why he thinks that is.) Even if this is just the production getting better at finding natural endings in the field or in the edit bay, the cleaner episode arcs have, ironically enough, eroded a little of what made the show feel different. It feels more produced rather than just filmed now, and the conflict, however genuine, doesn’t help alleviate the sense that the show, in its maturity, is a little more savvy about how to move all of its pieces around the board.

Yet the show remains as real as ever, thanks to a smart decision to not always reach for the next new, shiny thing.

The Profit’s updates are everything

What’s been most remarkable about this season are the updates on businesses that have been featured in the past—and they’re more than updates, and certainly more than those staged, highly choreographed updates that are Shark Tank’s weakest element (yet one that became a standalone series, alas).

Instead, they’re ongoing stories that the show returns to, turning it from a series of short stories into a longer, serialized novel with characters who return. Some updates, like for Mr. Green Tea, consume an entire episode of product problems and family drama; others show up halfway through an episode where a deal falls apart.

However they appear, we get to see real change and movement.

It’s not only evidence that this is all for real, and these investments are real businesses that keep running long after the cameras stop, but it’s entertaining. Characters—real people, yes, but characters nevertheless—are developed, and grow, and change. It’s one thing to see an arc over the course of an episode, someone who’s change-averse embracing Marcus’ 100-percent-in-charge decisions and seeing their reluctance to try new things fade. That’s interesting, yes, but it’s even much more compelling to see longer-term growth, or regression, depending upon the person and business.

There’s more. Twice this season there’s been no deal, and the episode takes an unexpected mid-episode pivot, returning to a business we’ve seen before. The willingness on everyone’s part to just follow that natural reality—okay, we have some footage but no deal, so we don’t have a full episode arc—is to be commended. It also makes the series so engaging, because you truly don’t know what’s next. Not every business featured will get a deal, or even 60 minutes.

The opposite of those mid-episode change-ups are the episodes like tonight’s “A Progress Report 4” season finale, which that have more recap than new footage. That’s following a template established by previous shows, and while it’s fine to learn about what’s new, the shorter check-ins means they’re not quite as engaging as the other kinds of updates.

Because this is one man investing in lots of businesses, there is a finite cap on what can be accomplished, and there’s no doubt returning to previous stories makes filming the show a little more manageable. (Marcus told me as much when we talked last month.)

The Profit isn’t quite a cinema verite documentary, but it remains one of the best reality TV shows because it does follow the natural course of investments in small businesses.

That’s why the now-casting spin-off The Partner makes so much sense. Marcus was already hiring people to help manage his businesses, so why not turn that process into a show, even if it will be a more produced version of his reality? It’ll also introduce new characters who will inhabit and help to keep growing and developing this fascinating world.