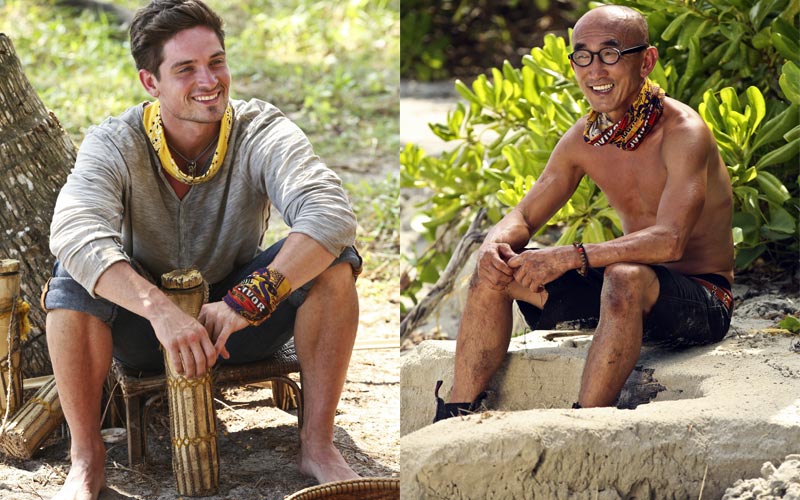 Survivor Kaoh Rong Beauty tribe friends Caleb Reynolds, left, and Tai Trang, right, in a photo I flipped to make it look like they were looking at each other. (Photos by Monty Brinton/CBS)

Two episodes of Survivor Kaoh Rong, two Tribal Councils with the Brawn tribe, two impulsive votes. Yes, we’ve so far taken a firm step backward from the season of exceptional strategy to the season of head-shaking, baffling discussions and decisions, starting with how the Brawn tribe doesn’t appear to know a hole in the ground from Jason’s ear.

But it’s a very different story on each of the tribes:

Before we get into the last one, a word about Brains and Debbie and Debbie’s brains and the well water: She’s right that it’s clean, brought in by the production, which still tells the tribes to boil the water. For sure, there’s the possibility that sitting water could get contaminated, or carelessness could cause problems. There are former Survivors who say they got something from untreated well water, though there are those who say they drank it unboiled, without consequence.

By the way, they also have plenty of sunscreen available, as another cast member confirmed on Twitter during the episode. So Jason’s sunburn? Yeah.

I don’t know what game Debbie is playing, nor Liz, nor Joe, who supplied the episode’s title, “Kindergarten Camp,” with his annoyance about Liz’s attempts to create things. Liz, of course, was annoyed by Joe’s destruction of things, which is so season-one B.B. that I wouldn’t be surprised if it was  deliberate homage.

But enough about Brains, which the producers don’t think we have so they’ve just labeled each tribe by their arbitrary category on screen. Let’s talk Beauty.

Caleb + Tai, or why diverse casting is important

On the Beauty tribe, we saw moments of a gorgeous friendship between Caleb and Tai. I’m still shocked at how much I’m appreciating Caleb so far this season, both as a competitor and a character, though of course we’ve seen very little so far. The moment teased in the preview—the not-quite “stolen kiss” between Tai and Caleb—was somehow both smaller and also more consequential. It was just a blip in a friendship between a straight guy and a gay guy who has a boyfriend.

Their sexual orientations are, however, the least interesting of their differences, however amusing it is for Tai to call Caleb “cuddlicious” and however awesome it is for Caleb to agree without question and say, “There is no such thing as homopobe in this guy right here. I like hanging out with him.” (The grammatical error was somehow charming, too. What is wrong with me?)

Julia described them as “the most different people I have ever met in my life,” and I’ll describe them as The Reason Why Diversity is Important on Reality TV Shows.

Look at Big Brother, Caleb’s previous CBS show, which casts overwhelmingly young people, and always the same kind of Southern dude or (openly) gay guy, where this kind of friendship probably never would have existed. (Yes, in BB’s defense, there have been a few interesting friendships over the years.)

But differences are so much more than just the surface ones, which is what BB doesn’t understand and/or doesn’t want. Diversity in casting should be about so much more than checking off categories (Southerner! Gay guy! All done!).

So little time elapsed, so much impatience

Tai’s lack of patience seemed to have hurt him last week, as he tore trees from the ground in a frantic idol search, but this episode it rewarded him when he again impatiently went off by himself. He found the immunity idol—well, he sort of found it. In a twist I like very much, the producers’ super-obvious clue, hidden, as usual, in a tree-hole, directed Tai to the location of the idol, but there he found a lock box with directions for retrieving the key.

If I were him, I might enlist someone’s help, but by pretending to discover that clue while taking a walk with that person. Tai, however, went right for it, climbing the tree and shredding his skin like it was a cheese grater. The tree trunk was swathed in blood streaks, which is horrifying. How exactly did he explain those injuries to his tribe, I wonder? I suppose he climbed a tree before so it wouldn’t seem that out of character, at least until someone sees the blood-stained tree and looks up.

Since his tribe is solidly safe, winning the immunity challenge, Tai has time to keep developing those relationships instead of not being the Debbie.

Brawn lost, again, in a challenge that should be made for a tribe of brawny people who use only their big, beefy muscles and nothing else. Excuse me while I climb out of Jeff Probst’s Pit of Thin Storylines.

I was rooting for Alecia—both because she’s being treated like crap and because she’s still persistent despite that—so I’m glad she stayed. She worked on fire for hours, and eventually started one. How awesome.

Meanwhile, Jennifer (who had the demon crawl out of her ear last episode) and Alecia conspired, realizing that the three women could easily vote out one of the two men on their tribe. Cydney didn’t ever seem to be on board, though, and once Tribal Council rolled around, Jennifer admitted that this plan was discussed. Why confess that, even if it was not the actual plan? It was an absurd Tribal Council performance that had me worried about how much damage that ear-demon did.

Then Jennifer acted wounded that her former alliance members felt betrayed. “The pain is them not trusting me,” said the person who suggested another alliance and then disclosed it and then maybe even lied about it. “I care about people’s feelings,” said the person throwing someone else under the bus to protect herself.

In a moment that surprised even Probst, Jennifer climbed up onto her Tribal Council stump—for absolutely no reason—and then said, “Please trust the original alliance we had. Nothing has changed.”

They didn’t; she was voted out; I’m fine that she’s gone but the tribe is such a disaster that I really don’t care much. The best part was Alecia’s reaction at being saved.

But that Jason. Ugh. He just needs to shut up and then go to Ponderosa and shut up again. His demeaning treatment of Alecia is sickening, like when he flaked off his sunburned skin into their cooking pot and told Scot, “Well, we’ll feed it to Blondie,” which is what he calls Alecia, perhaps because the part of him that can remember names was sunburned and flaked off. The sooner he and much of his tribe flake off, the better.