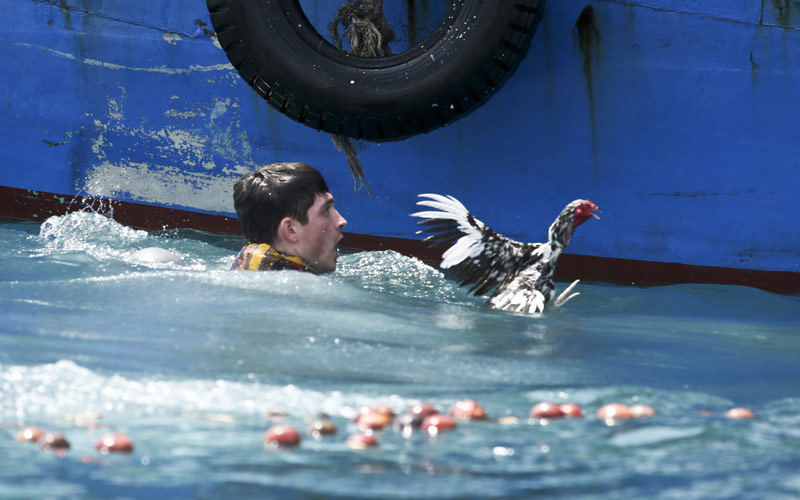 As a tiny, worm-like insect crawled out of a cast member’s bloody ear, Survivor Kaoh Rong became a full-on horror show, an island where 18 people ran around, susceptible to being hurt by unseen forces, many clearly out of their league, doing questionable things that may result in injury.

And the tension! Hanging over the episode—and season—is the threat of the three impending medical evacuations. What will happen, and what will be the cause? We’ve see flashes in the trailer of infections, bloody wounds, and worse, but there’s no clear sense of how or when these things will happen. As Debbie slammed an axe into bamboo, to no effect; or as Tai climbed a tree; or as Darnell jumped into the water, mask first, I was basically in no don’t split up and go in there alone the killer is there! mode.

It was, alas, a tiny insect that caused the most horror this episode. Jennifer woke up in the middle of the night, unable to sleep because she was “hearing these little legs crawling around in my head.” That was true: there was something in her ear, causing her increasingly excruciating pain. Also true: “I feel like there’s blood coming out of my ear,” she said before we saw her ear bleeding.

“I didn’t prepare for some bug to munch me from the inside,” she said. “I want to know what is inside me.”

I want to know what is inside me: Those are the most terrifying words ever spoken on Survivor.

Meanwhile her tribe was more concerned about winning the challenge than the bug that was possibly eating her brain, because that’s what happens in horror movies.

I have so many questions about the bug. Like, why did no one grab it for so long as it crawled around her ear? Probst says medical was aware but why did no one actually do anything? Did she try to drown it by pouring water in her ear?

And most significantly: Was it the bug that crawled out, or was that tiny thing one of the babies that had hatched deep in her ear and made its way out, causing the real pain by biting and clawing along the way?

A search for brains amid Survivor’s beauty and brawn

The episode opened with the classic, always-awesome scramble-for-supplies-on-a-boat scene. This time it featured Probst running around and screaming so loudly that he scared the chickens into jumping overboard, but luckily Big Brother’s Beast-Mode Cowboy Caleb Reynolds was there to jump overboard after it. Actually, so far Caleb has been a pretty decent character and player relative to his time in the BB house.

There far more annoying people in episode one. Like Jason, who condescendingly referred to Alecia as “blondie” and said “I have zero faith in that girl” and called her “blondie, little girl” later.

Alecia did herself no favors: The episode is titled “I’m A Mental Giant,” because after she called herself that, Alecia tried to record her vote at Tribal Council without removing the cap on the marker first. But her really dumb move was being pointlessly coy with two people who seemed like they were her on her side by telling them she might have an idol: “never said I did, never said I didn’t.”

We saw a lot of horror movie-level dumb behavior, with people calling attention to themselves on days one and two for all the wrong reasons, because they apparently haven’t seen the previous 10 years of Survivor. Among other things, the horror show included:

The cast did their best to make sense of their arbitrary divisions into themed tribes that seem barely better than completely arbitrary. If the show is really going to say six people’s primary attribute is their intelligence, or their smokin’ hot bodies and faces, let’s maybe actually find six people who actually fit that category? But really: Why can’t we just have three tribes? Why must we have this fake storyline on top of it? Why must everyone constantly talk about their tribe labels as if they matter? Oh, I forgot.

There are some good characters here. Tai stands out for all kinds of reasons, including that the editors gave him a lot of screen time and told his story. (Cambodia, he said, is “like, my hood,” because he fled Vietnam and spent 11 days without food before arriving at a refuge camp nearby.)

The Brains tribe, concerned with the legacy of the previous, disastrous Brains tribe, overcame and won the challenge—with the help of Aubry on the puzzle, even though she’s previously been mildly dehydrated and was “freaking out about freaking out,” as Liz explained Aubry’s “anxiety attack.”

Perhaps because there were 90 minutes to fill and only one actual challenge, the reward/immunity challenge started with something I cannot recall seeing before: actual footage of the tribe strategizing. (A lot of time passes between when Probst explains the challenge and when it actually begins, and each tribe spends time talking while Probst walks another tribe, one at a time, through the whole course so they can ask questions.)

The most unexpected part was the tie vote, in episode one. It’s been a long time since a challenge loss has been so clearly blamed on one player and then that player has actually been sent home for it, but that’s what eventually happened to Darnell, who pooped in the ocean and on his game. He was on the verge of tears throughout Tribal, and admitted, “I let all these people down” after saying, “I always had to fight for everything, so to just lose, it hurts.” But he didn’t really seem to fight to stay, either, and became the first person voted out of Survivor Kaoh Rong: Cambodia Horror Story.