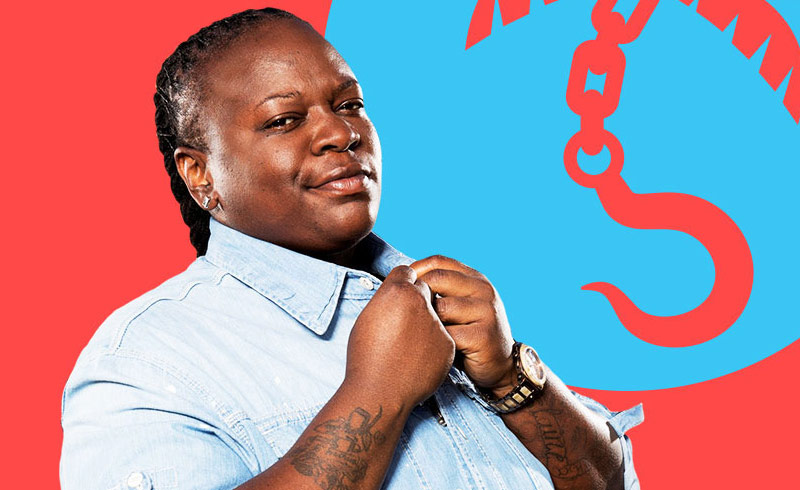 South Beach Tow‘s Bernice has been hired as as the football coach at Miami Jackson High School in south Florida, becoming the state’s first female football team head coach. Her assistant coach, and this is real, is 2 Live Crew’s Luther Campbell, who had a VH1 reality show, Luke’s Parental Advisory.

Yes, the woman who truTV describes as someone as “the explosive Bernice” who “loves tackle football, strip clubs, and money,” and who the Miami Herald once described as “known to rip a door off its hinges to get to the scofflaw inside,” has made Florida history.

Lakatriona Brunson was a PE teacher at the school, and “played football for the Miami Fury during the mid-2000s in the Independent Women’s Football League,” The Miami Herald reported.

That’s in addition to working at Tremont Towing, the company on South Beach Tow, which hasn’t aired a new episode since its fourth season concluded in late 2014.

The series was one of the centerpieces of the old truTV, which was more fake than true, as the show featured heavily staged and/or re-eneacted versions of allegedly real events. Like this one, starring Bernice herself:

Brunson didn’t want to discuss her fame at a press conference today, which is below.

“We’re not here to talk about music or reality TV. We’re here to talk about football only,” she said, according to the Miami Herald, which details her other accomplishments. “We’re just here to change the atmosphere at Miami Jackson and get some W’s on the board. I know I can do it … Watch what we’re going to do. It’s some big things coming up.”