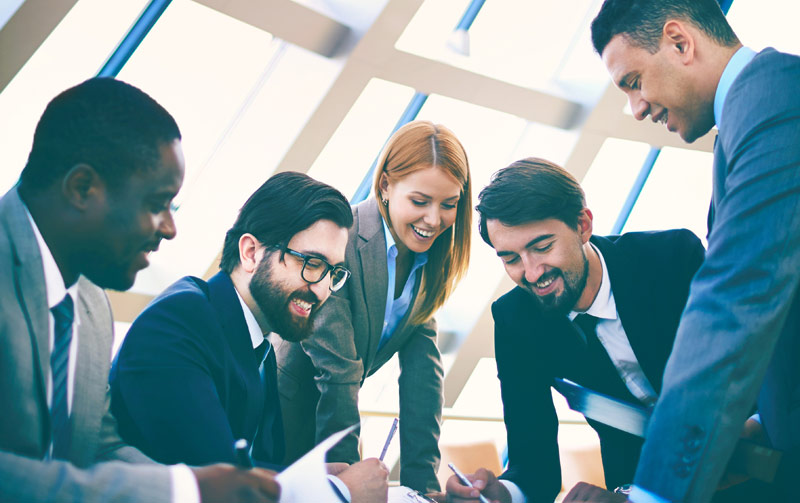 Reality TV credits are usually negotiated, perhaps by smiling people in suits and well-lit rooms, like this, or perhaps not. (Photo illustration by Shutterstock)

Do people who star in a “reality” show ( such as the Housewives franchises) and who also receive a producer credit get a producers fee? —Dee

Sometimes. But not always! The unsatisfying answer is: it depends.

I asked producer Troy DeVolld (whose book about the reality industry is highly recommended) to explain this phenomenon.

Titles and fees are “all negotiable,” he told me. “I know that’s an odd answer. Usually, there would be a bump in fee, though whether or not the star has meaningful input associated with the title varies. On the negotiation front, some managers and key people in the star’s camp may also have titles negotiated.”

There are so many possibilities. Which brings us to this question:

Okay, yes, I asked myself a question in my own Q&A column. Actually, I asked Troy this question on Twitter, because I find titles to be a source of frustration: they communicate so very little.

Consider Survivor: At the end of each episode, usually after an aerial shot of the tribe leaving Tribal Council with their torches, three names appear: Mark Burnett, Charlie Parsons, and Jeff Probst. All are identified as executive producers.

Yet Probst runs the entire show (and hosts it); Parsons simply created the format that the US show is based upon; and while Burnett established the look and feel back in 2000, when he was on location and in the edit bay, now he’s far more removed from the day-to-day operations than he once was. When Jeff Probst became showrunner back in season 21 and 22 (via Survivor’s unofficial historian Jeff Pittman, who points to the leaked call sheets as evidence) there was no title change, just a shift in where his name appeared in the credits and on call sheets.

Those are three remarkably different roles, yet there they all are, with identical titles.

Troy answered my question in a very informative blog post, which starts by saying, “Stop trying to make sense of them and start relying on context in relationship to the credits as a whole if you want to understand who’s who.”

He points out that “it’s all negotiable,” and that sometimes people with different titles have the exact same job. That can be different because someone has more seniority and a higher salary, or just because the production company uses different terminology than another production company. (Read his full explanation.)

So the answer to my own question is: Yes, people with the same title can have the same job. Or not. It depends. The contributions an individual makes to a production aren’t necessarily reflected in the title, as titles only provide a fraction of the information necessary. Ultimately, what a title entails, financially and practically, may only be explained by contracts that few people have access to.

I love Race to Escape, the game show, but cannot find it anywhere—not even on demand. Where can I view previous episodes? —Linda

All six season-one episodes are available on:

If you haven’t seen it, it’s a really fun show that does a good job of capturing the real-life excitement of escape room games. Here’s my full review.

And if you’re a reality TV fan who has an escape room near you, get friends together and go do one already. It’s just like being in a reality TV challenge.

Have a question about reality television? Ask me! Send questions to tips at reality blurred.com or via this form.